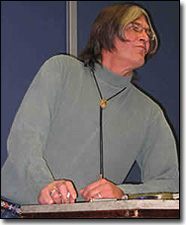 “A University of Colorado professor…” How about this? How about this story on the heels of Senator Kennedy’s speech yesterday at Johns Hopkins? The American left is just something! “A University of Colorado professor has sparked controversy in New York over an essay he wrote that maintains that people killed in the Sept. 11, 2001, terrorist attacks were not innocent victims. Students and faculty members at Hamilton College in Clinton, N.Y., have been protesting a speaking appearance on Feb. 3 by Ward L. Churchill, chairman of the CU Ethnic Studies Department. They are upset over an essay Churchill wrote titled, ‘Some People Push Back: On the Justice of Roosting Chickens.’ The essay takes its title from a remark that black activist Malcolm X made in the wake of the assassination of President John F. Kennedy. Malcolm X created controversy when he said Kennedy’s murder was a case of ‘chickens coming home to roost.’ Churchill’s essay argues that the Sept. 11 attacks were in retaliation for the Iraqi children killed in a 1991 U.S. bombing raid and by economic sanctions imposed on Iraq by the United Nations following the Persian Gulf War.”
So here you have a Colorado University professor, the chairman of the ethnic studies department, asserting something that nobody in the US government has, and that is that Iraq was behind 9/11. Not bin Laden, not Al-Qaeda, not Mullah Omar, not the Taliban. It was Iraq, because of the Iraqi children killed in a 1991 US bombing — and do you know how many children this man says we killed? Five hundred thousand. He says we killed 500,000 Iraqi children in a bombing raid, plus the economic sanctions imposed on Iraq by the UN following the Persian Gulf War. The essay, written by Ward Churchill, contends the hijackers who crashed airplanes into the World Trade Center and the Pentagon were “combat teams,” not terrorists. His essay says, “‘The most that can honestly be said of those involved on Sept. 11 is that they finally responded in kind to some of what this country has dispensed to their people as a matter of course.’ The essay maintains that the people killed inside the Pentagon were ‘military targets.’ ‘As for those in the World Trade Center,’ the essay said, ‘well, really, let’s get a grip here, shall we? True enough, they were civilians of a sort. But innocent? Gimme a break.’ The essay goes on to describe the victims as ‘little Eichmanns,’ referring to Adolph Eichmann, who executed Adolph Hitler’s plan to exterminate Jews during World War II. Churchill said he was not especially surprised at the controversy at Hamilton, but he also defended the opinions contained in his essay. ‘When you kill 500,000 children in order to impose your will on other countries, then you shouldn’t be surprised when somebody responds in kind,’ Churchill said. ‘If it’s not comfortable, that’s the point. It’s not comfortable for the people on the other side, either.’ The attacks on Sept. 11, he said, were ‘a natural and inevitable consequence of what happens as a result of business as usual in the United States. Wake up.’ A longtime activist with the American Indian Movement, Churchill was one of eight defendants acquitted last week in Denver County Court on charges of disrupting Denver’s Columbus Day parade. His pending speech at Hamilton has drawn criticism from professors and students, including Matt Coppo, a sophomore whose father died in the World Trade Center attacks. ‘His views are completely hurtful to the families of 3,000 people,’ Coppo said. A spokesman for Hamilton College released a statement noting that Hamilton is committed to ‘the free exchange of ideas. We expect that many of those who strongly disagree with Mr. Churchill’s comments will attend his talk and make their views known.'” 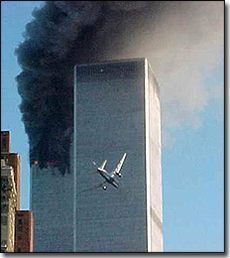 Now, Jeanne Kirkpatrick has been suspended from making speeches. Thomas Sowell has been shouted down on stage at liberal universities. You know the drill. No conservatives are ever invited to give a commencement speech anywhere — and here this guy, who claims we’ve killed 500,000 Iraqi children, that Iraq sought revenge by blowing up the World Trade Center, that the victims of the World Trade Center bombing are just a bunch of little Eichmanns and, “What do we expect? We brought this on ourselves,” this is the American left today. This man — you may think this is kooky and it is — but I’m going to tell you, something, folks. If you go to a bunch of Democratic websites, these little — you know, they’ve got their own new media out there and the Democratic Party had better figure this out real fast.
These Moveon.orgs and Americans Coming Together and all these other little web sites, these people think they’re running the Democratic Party now. If you go to those websites, you’ll find sentiment not that far removed from what you just heard me quote from Ward Churchill, who is the chairman of the ethnic studies department at University of Colorado. This is not a minor institution, not a minor department, and he’s the chairman of it, and he’s running around making these statements. Now, don’t misunderstand me. I’m not saying we should squelch things. I want these people to keep talking. I want these people to keep saying what they really believe. I want the spokespeople of the left to keep identifying their own beliefs. It may be hurtful, and it may be outrageous and it may be a pack of lies, folks, but it’s about time people found out who the American left in this country is. It’s about time we found out what is being taught on college campuses. It’s about time. You may disagree, you may think this is over the top, over the line, that this guy’s insane and he’s a wacko, and he shouldn’t be given a voice, that they ought to cancel his speech and so forth. It’s only going to make him a martyr. It’s only what he wants. Let him speak. Let him be heard. Let the American left continue to properly identify itself and themselves to all in America who can hear it.
END TRANSCRIPT