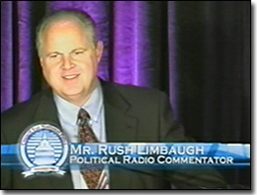 I must tell you, folks, I was a little squeamish accepting this invitation because of a prior experience. Many of you might have been there. It was 12 or 13 years ago; it was the CNP at the Pentagon Ritz, Ritz Pentagon, whatever it was, and I had not been briefed as to the makeup of the group. I was just told it’s a bunch of conservative leaders, and I said, “It’s my people.” So I said, well, I’m gonna go out and I’m going to start with a Ted Kennedy joke. There’s no way a Ted Kennedy joke will bomb at any conservative group. It did. When I got to the punch line, you could have heard a pin drop. I was stunned. I spent the last half of the evening apologizing from this — well, not this podium — but from the podium and microphone for my transgression. It was graciously accepted, and it was a learning experience. But this literally was — had to be 1992 or ’93, which was my fourth year into what I’m doing.
So I thought what I would do is try another joke. Backstage they’re saying, “No, tell the same one!” No. I mean it’s a great joke, but the thing is not a joke. It’s a true story. I think that’s part of what bothered people. It’s about Senator Kennedy. Oh, you want to hear it now? Oh, okay. All right, now, you have been warned. If anybody complains about it, no complaint’s going to be given any validity here because you’ve been warned. There’s no shock value here. True story. This is sometime in the late eighties, Senator Kennedy, not married, is vacationing off of the coast of the south of France, and he has a little, you know, speed boat type thing that he’s piloting himself. He’s got a young, nubile female with him. And a bunch of tabloid photographers chartered boats and helicopters and followed him out. And three of the pictures were published in the New York Daily News. And the first picture was of this nubile, young, bikini-clad woman jumping off the side of the boat going for a swim. The next picture was of Senator Kennedy jumping in after her — which was a first — and then the third picture was the two back in the boat in a warm and loving embrace. These pictures made the rounds of Capitol Hill, and they found their way to Howell Heflin, the then senator from Alabama. And Howell Heflin was looking at these pictures, and he said — I swear, folks, this is true — “Well, I do declare?” — you remember how he used to speak — “it sure look to me like the senator has changed his position on offshore drilling.”
I mean, I can see some people still not amused. Some people very, very casually taking a sip of? so let me try another one. Larry King dies, goes to heaven. He’s greeted there at the gates and is given a tour. “Mr. King, welcome. Would you like a tour?” “Sure.” They start showing him around various places, and he’s agog and aghast. They finally take him into this just indescribably ornate, human mind can’t conceive of the beauty in this room, and King says, “This is where I want to be.” “No, no, no, Mr. King, this is not for anyone, certainly not you.” “Well, who’s is it?” And he looks and sees there’s a sign that says Rush Limbaugh over the throne in the room. And King says, “Don’t tell me he’s here!” “No, no, no, no,” says Saint Peter, “this is God’s room; he just thinks he’s Rush Limbaugh.” Now, folks, you know, it’s like the left doesn’t understand when I say “talent on loan from God.” That’s a blessing. That’s a way to make fun of Larry King, who considers me one of his chief competitors.

I’ve brought along a little news, a little news digest that I wanted to share with you before we get into some of the meat and potatoes tonight, interesting stories you may not have heard about today since you’ve been tied up and busy. The president of Planned Parenthood resigned. Her name is Gloria Feldt. She abruptly resigned. She resigned yesterday. I doubt that her reason was that she wants to spend more time with her family.
As you know, the Super Bowl is in Jacksonville this year, a week from Sunday. And a judge in Jacksonville has ruled that Jacksonville’s ban on drinking alcohol, adult beverages in public, is unconstitutional, just a month before the fans pour in for the Super Bowl. The story actually cleared on January the 11th, and I just saw it today. Here’s how this happened. Three homeless drunks were charged with drinking beer in the city’s Treaty Park, which is an area where Super Bowl fans will be allowed to drink. And these three homeless drunks got a public defender, and the public defender goes to the judge and said, wait a second, you let all these football fans tailgate and get drunk before football games on Sunday; the Super Bowl fans are coming in, and they’re going to get drunk all weekend when they’re here, and why can’t we drink on Wednesday in the park? And judge said, you’re right, you can. So public drunkenness in Jacksonville has just been sanctioned by a district county judge.
I don’t know how many of you have been following the militant environmental movement, but I have for my entire career. And one of the things I remember, they tried to say that methane was a pollutant that led to greenhouse gases, to global warming, and methane has many sources, one of them is cows. And for the longest time, bovine flatulence has been blamed for global warming. There’s a lot of people who believe this, and it’s one of the reasons McDonald’s has come under assault and attack. And just today from Bakersfield, California, a relationship between dairies and the Central Valley’s polluted air changed dramatically when a UC Davis researcher reported that dairies produce far less pollution than previously believed. So we can all sleep better at night because bovine flatulence can now occur without harming us and causing us to be… (loud moo sound from back of the room) Is that the hook?
One more study that shows smoking is bad: Parents smoking can kill children years later. Now, I smoke cigars, and I don’t subject it to people who don’t want to be around it, but I got to thinking. They say that secondhand smoke can kill children years later. Did a research survey, folks, got in touch with a number of hospitals. Ninety-nine percent of the people who died in automobile accidents had eaten carrots two years prior to the accident. Eighty-nine percent of the people who had lost their eyesight after age 80 had spent a lifetime eating carrots. I mean, these statistics are absolutely ridiculous, and it gets to the point here — you know, one of the things that bothers me about all of these is that these are experts, we don’t have any idea who they are. They come out and they say, this is happening to the environment, and, by the way, it’s all being caused by Americans and our technological advancement. All these things are literally killing people and people are so obsessed with the negative, they’re so obsessed with doom and gloom that they are willing to sop it up and believe all this stuff, and it’s how global warming gets — there’s no proof whatsoever that manmade global warming has any effect on the climate. I’m appalled at the vanity of people who think that we, mere creatures created on this planet along with everybody else, have the ability to destroy it. It’s sophistry to think this, particularly to think that we have the ability to destroy it when we are advancing our lifestyle, when we are cleaning up our environment better than any other country in the world, when we are providing cleaner air, cleaner water, more food for the rest of the world, for everybody to pull back and blame all of this on us, and then for a number of Americans to believe it is just sad. It is. (applause) 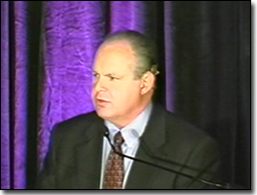