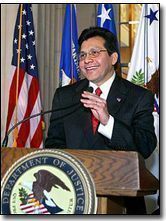 RUSH: The Senate confirmed Alberto Gonzales yesterday as the new attorney general, and his first day at the justice department was today. In fact, we have some audio sound bites of Gonzales? Yes, we do. Let’s go to audio sound bites 15 and 16 there, Alltmont. This morning at the justice department, Alberto Gonzales made history by becoming the first Hispanic attorney general. Here is a portion of his remarks to employees at the Justice Department.

ALBERTO GONZALES: During my hearings, America had an opportunity to learn a little bit more about my personal life story. During the hearings of Condi Rice and Carlos Gutierrez, America also had the opportunity to hear the life stories of other Americans. Our stories reflect the American dream. That’s what our stories represent — and there are many others in this country who share similar stories, stories of the American deem, of equal opportunity in this country, and it has historically been the case that it falls upon the shoulders of the attorney general to ensure that that dream is available to future generations of American children.

RUSH: And he continued on with this, and this is good as well.

ALBERTO GONZALES: The president said that the #1 priority for the department is to protect this country against future acts of terrorism, and we will continue to make that our top priority. But we will do so in a way that is always consistent with our values and consistent with our legal obligations. That will be, of course, the loadstar that will guide us in our efforts here at the department. My style of management is basically one of listening. I like to listen to people, and I look forward to the opportunity to meet as many of you as I can during the weeks and months and years ahead, and listening to your ideas about what we can do to make this department even greater.

RUSH: All right. So there’s Gonzales, and all over television today is Condoleezza Rice, her first foreign trip. She went to London, met with Tony Blair. She is in Berlin today meeting with Gerhardt Schroeder. You know how we are a picture-oriented society? If we don’t see it, we don’t believe it. We do see it, we believe it. Just take everything in context here. Condoleezza Rice, nominated. Here came these racist cartoons and the mad opposition of the Democratic Party, which has staked a claim to civil rights and affirmative action and supporting blacks, and these liberal cartoonists and the Democratic Party attempt to impugn the integrity and reputation of Condoleezza Rice. She withstands it all, becomes the secretary of state, and now there are pictures of the most powerful United States diplomat all over the world, a black woman, meeting with these world leaders. How do you think those pictures are seen in certain African-American populations and communities in this country? You think there’s a little bit of pride there? You know damn well there is. Now, there are going to be pockets of anger from, you know, extreme leftists, civil rights people and so forth. But I’ll guarantee you, the worst thing that could happen to these Democrats is opposing her as personally as they did, and here are these pictures now and the pictures say a thousand words and ditto with Alberto Gonzales, the first Hispanic attorney general. 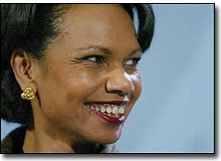 And now the liberals and the left will be forced to continue, because they know nothing else, to read pages from their playbook about how the Republicans are racists, sexists, bigots, homophobes and all of this, and yet there are pictures. Well, now, wait a minute. If Bush is a racist and is a bigot and a sexist…? The left will have answers for this but they will no longer be persuasive. Their answers are irrelevant. They will claim that Bush is selecting Uncle Toms or these people are sellouts to the cause or what have you, but in the meantime, they do serve in these positions of great power and authority and they are part of the president’s team. Pictures say a thousand words.
You know what Dusty Harry did yesterday? Dingy Harry, the Senate debate on Gonzales? Dingy Harry tried to compare Alberto Gonzales to the North Vietnamese. I mean this is one way of interpreting this. Dingy Harry, the Senate Democratic leader, read passages — this is on the floor of the Senate during debate on Gonzales — read passages from a memoir by John McCain about his time as a Vietnam prisoner of war. “It’s an awful thing, solitary,” he read, from Faith of my Fathers. “It crushes your spirit; it weakens your resistance more effectively than any other form of mistreatment. Having no one else to rely on to share confidences with, to seek counsel from, you begin to doubt your judgment and your courage.”

Now, why would Dingy Harry read from McCain’s book about solitary confinement as a prisoner of war during the floor debate on Alberto Gonzales? Well, if you know that the Democrats tried to torpedo Gonzales on the basis that he wrote those torture memos for Abu Ghraib, it seems to me that Dingy Harry was trying to draw a correlation between the way the North Vietnamese treated McCain and now we’ve just nominated and elected an attorney general who engages in the same kind of torture practices when we conduct wars. That’s how I interpret Dingy Harry’s transparent effort.
END TRANSCRIPT