Back in Action, by David Rozelle 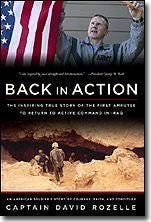 There’s another book out there. I got in the mail the other day, actually this came yesterday, I got a book here, and I don’t know what the next issue of the Limbaugh Letter is going to be devoted to yet — well, I do. I want to find a way to get this in. Captain David Rozelle has written a book, Back in Action. The inspiring true story of the first amputee to return to active command in Iraq.

He was on television yesterday, saw him on Fox doing a couple of interviews, and I just got the book because it took a circuitous route to me, and he signed the book, ‘To Rush Limbaugh, thank you for your support of our troops. Celebrate the spirit of the American soldier, Captain David Rozelle.’ You know, we ask, where do we find people like this? These are volunteers. Where do we find people like this? He’s a soldier who lost his foot in Iraq and is going back. This is something the American left cannot understand. They’ll send reporters up to Walter Reed to talk to injured soldiers, even amputees, and will be stunned to find out they’re not angry, that they want to go back.

So yesterday morning David Rozelle, Captain David Rozelle appeared on Fox and Friends. We just have a couple sound bites here, and the guest hostette yesterday, Kiran Chetry, asked him a question, or made a comment before a question, ‘After losing his right foot in Iraq, our next guest became the first amputee certified to return to the battlefield where he was actually injured, same place. He went back. It’s an unbelievable story,’ and then she said, ‘After everything you went through, painful injury, the months of painful recovery, you decided to go back. Why did you decide to go back?’

ROZELLE: Well, you know, it’s a sense of duty I have. Part of my oath of office was, you know, to serve my country and to follow of orders of my president. We’re still at war, the country is still at war, and I felt like I was not done. So it’s not necessarily that I want to go back right now but, you know, a good soldier prays for peace and prepares for war.

RUSH: And Brian Kilmeade then said, ‘What is your feeling about the operation in Iraq?’

ROZELLE: Success. When we had a successful election in Iraq, I felt good about my injury because I had contributed to something great. Those people, when it came out more than the American people came out to vote in a lot of senses, I mean it’s great.

RUSH: So that’s just a little bit, Captain David Rozelle whose book is called Back in Action, it’s published by Regnery, which I think is the same publisher publishing F. Lee’s book, first amputee to return to action. So, I thank you, captain, for sending me a copy of the book.