The CBS poll (story | PDF), there is something about this company, this news division and George W. Bush that — I mean it goes back, but something is festering -? and this poll is as irresponsible as any poll that they have ever done, this poll that shows Bush with a 34% approval rating. By now some of you have gotten the details. Let me give them to you if you do not know.
This is a survey first of all, of just adults, Americans. This is not a survey of voters. It is not a survey of likely voters. It is not a survey of registered voters. It’s just a random sample of, “Will you answer the phone today, and I got some questions for you,” and the questions are absurd, and the questions are misleading and the questions lie, and this poll was produced to make news, just as they all are these days. This poll was nothing more than a way for CBS to get its editorial position out there as a so-called news story. That’s all this poll was. The sample that they used in this poll: 28% Republican, 37% Democrat, after they weighted the Republicans up. In other words, the sample was even more Democrat when it came back. Democrats were 40% of the sample. Republicans were only 27%, and the independents were given a huge weighting, not even a weighting. They were just given a huge percentage of the respondent pool. I mean, you got a sample of 40 to 27 Democrat over Republicans. I mean, that’s a dead giveaway what the intent here is. The people at CBS didn’t even bother changing this to put both the numbers in the thirties to have a relatively equal sample. This is not representative of the population of the country in any way, shape, manner, or form. Nor is the fact that Bush has 34%, nor is the fact that Cheney has 18%. You just know that’s not possible. It simply isn’t possible. 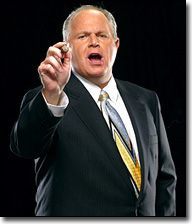 Yet here comes another phony baloney, plastic banana, good-time rock-‘n’-roller poll that is nothing more than a news maker and a news maker with a specific editorial point that is desirable. Bob Moran who works at Fabrizio McLaughlin Associates, which is a polling outfit, did a little analysis of the poll at National Review Online. He said, you know, 90% of the polls we do are never for publication, and most pollsters’ polls are never for publication. They’re for internal use; they are for clients’ use, politicians’ use, candidates’ use, and they’re inside, and we don’t do these to make headlines. This poll was done specifically to make headlines. It was weighted the way it was to get the headline they wanted, and the questions were phrased in a way to get the answers they wanted. For example here is question 54 in this CBS poll. “After 9/11, President Bush authorized government wiretaps on some phone calls in the US without getting court warrants, saying this was necessary in order to reduce the threat of terrorism. Do you approve or disapprove of the president doing this?”
Now, does that accurately portray what the NSA surveillance program was about? It does not. What was left out of this question? What was left out of this question is it’s not some phone calls in the US. It is phone calls that either originate or end in a foreign country and come through the United States. If you are talking to a suspected or known member of a terrorist group, this program found you. Now, if the question had been accurately posed and raised, do you think the answer would have been a little different than what CBS obviously got on this? Yes. And they know it, or do they?
I’m going to tell you something, folks. The mainstream media, you know how to view them from now on? Listen to me Mr. Snerdley, stop what you’re writing in there, and I want you to listen, because here’s what the mainstream media are. They are drive-by shooters. This is exactly what they are. They pull up to a congested area; they spray a hail of bullets into the crowd, causes mass hysteria, mass confusion, mistakes and misinterpretation. Sometimes people or their careers actually die. The mainstream media then smirks and pats itself on the back, says, “Look what we can do,” and they ride away unnoticed in the excitement. They are never blamed; they are never held accountable. In fact, they are lauded, they are held up as heroes, mostly by themselves. But they are. They just troll around looking for any issue they can to get everybody all worked up, creating hysteria. It is like a drive-by shooter. It’s like road rage every day. That’s what the mainstream press has become.
Every time they do this, every time they pull up to one of these congested areas and spray a hail of bullets into the crowd, somebody’s gotta mop up the mess that they caused. And at the same time the mess is being cleaned up, the mainstream media is back flying down the highway with the top down laughing and looking for the next bunch of victims to spray their bullets into. This is repeated over and over and over. There seems to be no stopping them. We’ve got the port issue, we had Cheney last week, we have all the deaths in Iraq, we have civil war in Iraq; it used to be the SUVs. It was the profit photos and so forth, or cartoons. It seems like everything ends up just being a drive-by shooting. That’s the best analogy I’ve heard to describe the mainstream media’s act today, and it’s exactly what it is. It’s an act. This poll is simply outrageous. It is beneath the dignity of a serious news organization and profession, but CBS long ago gave up any interest in that.
BREAK TRANSCRIPT

I simply sit here in stunned amazement that these people in the antique media, the modern-day equivalents of drive-by shooters now, still haven’t figured out they can’t get away with this anymore. This is not 18 to 20 or 30 or 40 years ago where they come out with a poll and nobody but them had access to the data. You can see what they’ve done and you can see how they’ve done it, you can read their questions, you can quickly assign motive, and the desired outcome to the result. So they have Bush at 34%. The Cook Report has Bush at 40. Rasmussen has him at 43. No other poll is going to come out with Bush at 34% or Cheney at 18. But even if they did, hypothetically, let’s just say these numbers are right on the button. Bush at 34% still has a higher rating than CBS has ever had for the CBS Evening News since Cronkite left or any of their prime-time shows other than CSI: Miami, and I think Bush even beats that. So if we want to talk about popularity and ratings, we can document CBS’ fall and their decline. About the only thing CBS has got going for it that’s worth anything is CBS Sports these days. You find real people over there. But this news division is just absurd. 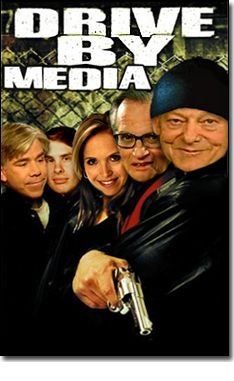 And then of course the unthinking, the uncurious, the simple reactionary media, who join CBS in the drive by shooting of this poll, all had to get in on it so what we have here is a montage of this rigged poll, oversampled with Democrats to create a news story. The montage is Bob Schieffer of CBS, Jessica Yellin of ABC, Ann Curry — where is she anyway, NBC or ABC? I don’t care, Ann Curry. Larry King, Harry Smith of CBS, Eleanor Clift of Newsweek, Bill Plante as CBS, Julie Chen at CBS, Diane Sawyer. That’s who’s in this montage.
SCHIEFFER: The president’s job approval rating has fallen to an all-time low of 34%.
YELLIN: A new poll shows that Mr. Bush’s approval rating is once again at rock bottom.
CURRY: A new poll finds the president’s job approval rating at a new low.
KING: Bush, 34%, lowest rating he’s ever had.
SMITH: A new CBS poll finds it’s now the lowest it’s ever been.
CLIFT: This poll rating has dropped precipitously.
PLANTE: The president’s rating to a new low, at an all-time low in our poll.
CHEN: President Bush’s approval rating at an all-time low
SAWYER: The president, whose approval ratings have plummeted again.
RUSH: You would think — no, you wouldn’t. You would think that one of these organizations would want to stand out and look at the details, the internals of this poll to examine it, but, no, just report that number. They’re a monolith and they think they’re still a monopoly. Just is amazing here to see this, my friends. It really is. At some point, I do expect these people to wise up. The Democrats, too. I expect them to wise up, but they act like they can get away with all this as though nobody’s going to be out there telling the truth about what they do. They have yet to come to grips with the fact of so much of what’s going on in their business. They’re losing readers, they’re losing subscribers, they’re losing viewers, they’re losing money; they’re losing jobs. And, meanwhile, they run around trying to destroy other industries. Wal-Mart, big oil, big pharmaceutical, you name it, any successful enterprise in this country is an enemy of the left.
END TRANSCRIPT