General Wardak and Dan Rather 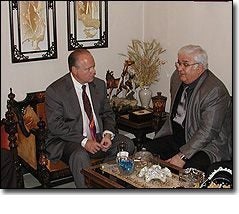 One of the many people I met in Afghanistan, a famous General Wardak, W-a-r-d-a-k. He is the new defense minister there, but he led the mujahideen insurgency against the Russians and defeated them in the 1980s. I had a long dinner at his home one of these nights, and he was quite a fount of knowledge about things. In fact, if people say, “What was the most memorable thing about your trip to Afghanistan?” try this. I haven’t seen the CBS Evening News with Dan Rather in it’s gotta be ten years. So I go to Afghanistan; I go to dinner at General Wardak’s house and at the close of dinner right before anybody has to leave. He says, “Sit down.” There are about 30 of us there. “I want you to see something.” He puts in a videotape, and it’s Dan Rather. So I leave America. I travel halfway around the world to Afghanistan; I’m having dinner at General Wardak’s house and I’m watching Dan Rather! He was doing a three-part report on the Afghan mujahideen defeating the Russians. Two of the reports were very pro-mujahideen. The third report gagged me. It was a piece of sympathy for Russian soldiers, and you would have thought from this third report that the mujahideen of Afghanistan had invaded Russia and these poor Russians were about to never go home to their parents again rather than it being the other way around.
But after that, I said, “Okay, I’ve got some questions for you. How did this happen? How were you able to defeat the ? Nobody had done this before,” and you know what his answer was? And you liberals, I want you to listen to this. General Wardak said that it was the first time since World War II that the Soviet Red Army got sensitive about casualty losses. They became more concerned with casualty losses than they were with the rules of war which they had always followed, which basically are you kill the other guy before you get killed. It’s the purpose of armies: “To kill people and break things.” He said, “It was amazing, but in this conflict the Russians were more concerned with not losing personnel than they were with beating us. I think one of the reasons was they thought it was just going to be easy. Who are we? They thought we were a bunch of backward savages wearing turbans out there and weren’t armed, but if it hadn’t been for the US Stinger missile.” The Stinger missile was the key. The Stinger missile caused more problems for the Soviet army and the Air Force than anything that they’d encountered. It altered their whole military strategy, but he said, “If they hadn’t gotten all sensitive on us and got worried about their casualty count, it might have been a different outcome.”
END TRANSCRIPT