American Judiciary Totally Out of Control

RUSH: All right, the Supreme Court death penalty case. They ruled today the Constitution “forbids the execution of killers who were under 18 when they committed their crimes. That ends a practice used in 19 states. This will throw out the death sentences of about 70 juvenile murders that bar states from seeking to execute minors for future crimes. Justice Anthony Kennedy wrote, ‘The age of 18 is the point where society draws the line for many purposes between childhood and adulthood. It is, we conclude, the age at which the line for death eligibility ought to rest.’ Justice Kennedy cited international opposition to the practice.” There we go. There we go. There we go. 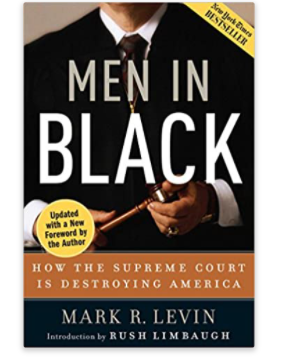 We got 19 states who have it as the law of the land, the Supreme Court seeks international backing for its own moral opinion, finds it in two unratified treaties, and then takes the international view and incorporates it with their ruling to come up with basically a moral ruling here, not a legal ruling. “In dissent, Justice Antonin Scalia disputed that there is a clear trend of declining juvenile executions to justify a growing consensus against the practice. He said, ‘The court says in so many words that what our people’s laws say about the issue does not in the last analysis matter. In the end our own judgment will be brought to bear on the question of the acceptability of the death penalty,’ he wrote.”

So we have to go cite international or find international sources on this. He concluded by saying, “The court thus proclaims itself sole arbiter of our nation’s moral standards,” and that’s exactly right. This is a moral question; they’ve converted to a legal question. They’ve overruled the law in 19 states because they found some sources in international law and two unratified treaties that supported the moral conclusion these five justices sought. You know, and we’ve talked about Mark Levin’s book, Men in Black. Everything that he warns about in his back happened in this case. You’ve got Justice Kennedy using foreign law, usurping state legislatures. You’ve got selective use of social research. The personal imposition of moral and policy beliefs on the nation disguised as law. It is a quintessential example of everything that we warn against.

Now, I understand that some of you, “Come on, Rush, what’s the big deal? What is this business of murdering or executing 16 and 17-year-olds anyway? Why are you so upset about this?” What I’m upset about is the court has decided to take this and make it a legal question rather than a moral one. They have usurped the rights of 19 states, the people in 19 states, whose elected representatives have made laws, and those states should have the right to maintain those laws, and if they couldn’t find any support in the United States for what they thought was a moral decision, so they seek international support and find it, as I say, in two unratified treaties.

This is usurping authority and power and goes beyond what courts are to do. They’re not to impose a morality on a country or on us, but that is what has happened here. I just wanted to take the time to warn you. By the way, there was another decision that came down yesterday. This lower court judge, district judge, this judge recommended by Lindsey Graham, senator from South Carolina, appointed by President Bush on Graham’s recommendation, that Jos? Padilla either be charged or released. The judge said, “Charge him or release him.” Now, again, this is probably something that most people at first glance say, “Yeah, he’s been held a long time. What you are going to do? Make up your mind what you’re going to do.” Charge him or let him go.

Come on, let’s get serious! We’re talking about the war on terror, and we’re talking here about enemy combatants. Here is the bottom line on this: The government is seeking information from Padilla that will help them track down other cells and other Al-Qaeda operatives which is precisely why they don’t bring charges. The government is not interested in putting Padilla in jail or convicting him of anything right now. What the government is interested in is stopping future terrorist attacks.

So if they charge Padilla as this judge is demanding or let him go, if they charge Padilla, the government will have to reveal all of their intelligence that they’ve collected about him in court, and then the enemy will become aware of what we know which will make it a little more difficult to stop them — and there’s a reason why he’s not being charged. There’s a reason why he’s being interrogated. It’s because we’re trying to stop future attacks. Yet the minute they have to bring charges, they have to list all the reasons why, and give the evidence, and here is the intel and so forth, and bam, everything we’re trying to accomplish here is blown to smithereens. So this is the problem now with courts getting involved here. 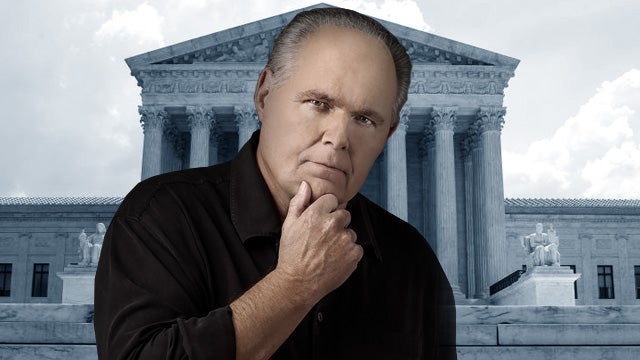 You know, Clarence Thomas was the only justice last summer to recognize this, when he said that even where there’s a US citizen involved, the danger doesn’t change. The courts are no more qualified to intervene in these decisions than anybody else is. It’s the war on terror even if it is an American citizen. Now, it seems to me that if someone uses the cover of their US citizenship to plot massive attacks against the US, he’s worse and more dangerous than a foreign enemy combatant who does the same. Now this judge has demanded that the war on terror be fought under the judge’s terms, just charge him or release him, and so another undermining decision from the American judiciary. It’s a judiciary that in many instances is totally out of control.

CALLER: I’d like to say that the court has lost credibility, but they’d have to have some to start with before they could lose some.

RUSH: Yeah, it’s ridiculous. I think it’s more usurpation of authority. It’s the imposition of a moral question as law. It is seeking sources outside the United States because they can’t find any domestically. You live in LA. I mean, you live in gang central.

CALLER: Yeah. It’s horrible. Just a month or two ago, a cop was executed on the street by a Mexican gang banger, underage judicial fiat citizen brought here by the courts.

RUSH: Yeah. Well, that’s the thing. Some of these gangs, – well, they all have murderers and rapists and so forth. They kill for sport. They kill for initiation sometime to get into the gang — and, you know, a lot of people say, “But, Rush, but, Rush! The death penalty, uh, doesn’t deter anyone.” I don’t care. I never have looked at the death penalty as a deterrent. It’s a form of punishment, and we as a society have voted for it. People in 19 states have voted for the death penalty for minors. But, no, Supreme Court comes along and says, “That’s morally not right,” and so they’ve just wiped the law off the books. Here’s Lee in Alamogordo, New Mexico. Welcome to the EIB Network.

CALLER: My question is, you remember Nancy Reagan’s “Just Say No to Drugs”?

CALLER: I’m asking you if the governors and the president couldn’t just say “no” to these justices and force the crisis. I know impeachment is not realistic, that’s not going to happen, but with some of these rulings I’d like to see the states governors say, “Hey, no, we’re not going to enforce that.” 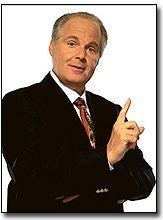 RUSH: You know, that’s not the way to go about it. You don’t fight this with lawlessness. You don’t do that. But the way to do this, there are other reforms that could happen. Now, they’re a long shot, but let’s term limit Supreme Court justices, let’s get rid of this lifetime appointment business. If the president can veto a bill out of Congress, and Congress can override it; Congress is the elected body of the American people. That is, we’re a representative republic and our elected representatives serve there. If an unpopular decision comes down, especially something like this which is really not even rooted in law, it’s just morality, let’s have the opportunity for the Congress to veto a Supreme Court decision and make it a supermajority to do so but lets have that as a possibility.

Well, the problem, “You can’t do that!” Why not? You have to understand the Supreme Court, as far as our Founding Fathers were concerned, was not set up to be the final arbiter of what is constitutional. The court assumed that role for itself in the case known as Marbury vs. Madison. They just decided during the Thomas Jefferson era. just decided they’re going to be the final arbiter of what is and what isn’t constitutional, and so since then the country has basically just accepted that, and the court has become more and more a vessel for deciding political issues.

The left particularly looks at the court as its main technique for getting its views woven into the fabric of our society because they can’t do it legislatively so they go out and they love these activist judges who will invent law, create law, and write law from the bench rather than simply interpret the Constitution — and that’s gone further than even what Marbury and Madison decided. Marbury vs. Madison simply said we’re going to decide what’s constitutional. Now, certain judges, “We’re going to invent law and we’re going to say it’s constitutional.” Well, if the original intent of the founders was not to make the Supreme Court the final arbiter, who should be? Why not the elected representatives of the people?

Give them veto rights over Supreme Court decisions. Now, I know, it’s a long shot, but people are looking for answers, solutions. What do you do here? And I tell you, the answer not lawlessness. The court makes a ruling, you just don’t say, okay, we’re not going to abide by it. That’s not the answer to this. I know lawlessness and dissent on the left, that’s some of the way they go about it, but it’s not anything I would advocate.

The Supreme Court’s decision to ban the execution of juvenile killers, it won’t affect the prosecutions of convicted sniper Lee Boyd Malvo in Maryland because Maryland does not have the death penalty for minors. However, Louisiana and Virginia do, and now Louisiana and Virginia are going to try to do what they can to extradite Malvo for trial there, given this ruling – and this ruling will affect future Malvo prosecutions as well. Now, the idea that somebody like Lee Boyd Malvo is immune from execution simply because he did what he did as a minor, well, it boggles the mind, folks. It literally just boggles the mind.