Will Democrats Be Replaced By Something New?

RUSH: We’ll go to Kenosha, Wisconsin&lt;/a>. Hello, Bill, nice to have you with us.
CALLER: Hi, Rush, welcome back.
RUSH: Thank you.
CALLER: And thanks for going over there. It reminds me of The Deer Hunter, for Pete’s sake.
RUSH: (Laughter.) I appreciate that. Thank you.
CALLER: There’s a lot of us that would like to get over there. I’m a Special Ops guy myself, and we’ve spoken before. I think, getting back from and bin Swimmin’ and bin Sharpton to bin Laden. It’s actually a good thing that we see this going on with Zarqawi, because, you know, bin Laden is not operating openly anymore, but Zarqawi is. So he’s got a network of people trying to get into the country, and what bin Laden is trying to do, if it’s legitimate, and it may not be, we have to consider that possibility. He’s trying to get Zarqawi to commit people that are heading into Iraq to going somewhere else and doing something else. 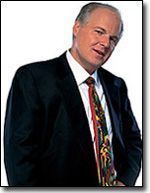 RUSH: But do you interpret this as a sign of weakness or strength?
CALLER: I interpret it as a weakness on the part of bin Laden, and I don’t believe Zarqawi has the assets to do it. I mean, we’re way into this thing now. We’ve got a lot more situational awareness than before. We know Zarqawi’s pipelines. We know they’re coming in from Italy and other places. We even know that there are European Muslims that are making their way to Iraq. But, I mean, we at least have a death penalty for these people although we don’t have for people under 18 in our own country anymore. So we can get rid of them when we need to.
RUSH: Well, does this worry you?

they’re only spiraling down even further. They are corkscrewing themselves into the cork, and pretty soon the corkscrew is going to disappear. That’s what’s happening to them. Until they get honest about who they are and what they really believe and start competing on that basis. They used to do this. They used to tell you they’re for high taxes. They used to tell you they were for big government. That’s how they got known that way. Now they know it’s very unpopular and so forth, so they’re afraid to do it, but this is why it gives me confidence about them remaining as irrelevant and inconsequential as they are. In this new era of a broad-based, wide alternative media which has resulted in a more informed, educated, and sophisticated political and news audience in this country, you can’t get away with lying to people. You can’t get away with obfuscation. You cannot build a movement based on this.
They’re not going to take my advice, don’t worry about it. Some of them do. I mean, some of them are very honest what they believe in, and I know they sound like incredible wackos and idiots when they do, but, you know, there are ways that they could do this and soften the impact of how it sounds. They could go back and cite what they think are big government programs that helped society, helped the country, and say that’s what they want to do again, and they should also be honest that. “Yeah, we’re doing this because we don’t like President Bush.” Just be honest about it. You’d be surprised how far honesty carries you. But this business of trying to be somebody you’re not and trying to portray yourself as somebody you’re not. They’re just forever dooming themselves. In fact, let’s go back to audio sound bite #1, Robert Novak yesterday. This is on CNN’s Inside Politics with Judy Woodruff. And, you know, Dean over the weekend, he was at Cornell University, and he was talking about how Republicans are “evil” and Republicans are this or that, but he also said something about Social Security, which is totally at variance, and this was the great fear that a lot of Democrats had. Dean’s not supposed to be out there articulating policy, as candidates do. He’s primarily a fund-raiser in this but he can’t shut up about policy. Here’s what Novak quoted him as saying.
NOVAK: They’ve got to really get Howard under control. He spoke at Cornell University last week, and the only paper that covered this was the Cornell student paper, and he said, “Yes, Social Security is a big problem. Over the years it’s going to lose about 80% of the benefits.” That, Judy, is not the Democratic line. The Democratic line is: “There is no problem.”
RUSH: Hey, hello? I mean, so he’s out there saying things totally opposite what the rest of his party is saying, from Nancy Pelosi to Dingy Harry to Ted Kennedy to whoever: “Social Security is not a crisis. There’s no problem. We don’t have to touch it. We don’t have to do anything,” and here’s Howard Dean up there admitting to students at Cornell it’s a big problem. Now, I’m just telling you they’re not going to go anywhere doing this, and I don’t think Dean has the weight and the “gravitas,” if you will, to pull the rest of the party with him on this. The exact opposite is going to happen. Dean starts doing this at bigger places than Cornell, with larger media audiences than just a student newspaper and he’s going to be smothered by the people because he’s going to be undermining their tack in Washington on these policy things. So it’s going to be fun to watch here, folks. But there’s no question — and, by the way, the author of this theory about the disintegration of the Democratic Party as we know it and this new coalition of right-wing protectionists and anti-immigrationists with the left-wing anti-war crowd, the author is a prominent Democrat. They’re feeling it. Make no mistake about it.
END TRANSCRIPT