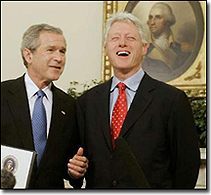 You heard it, Vice President Cheney said there’s nothing to the coziness between President Bush 43 and 41 and Bill Clinton other than just it’s an elite club and time changes and heals all wounds. That there is not a political calculation behind this, and anybody who is trying to make one is — he didn’t say this — but it is trying to be too smart by half. Of course, if there was and is a political calculation that is behind this, I doubt that it would be admitted to anyway. It’s the same old thing. If you had a marketing plan, you don’t tell people what it is. You just execute it. The problem with telling people what the marketing plan is, is that you give them an opportunity to brace themselves for it, and that obviously is not something they want to do.
One more thing here on Social Security. The president was in Memphis and he said yesterday, “I’m saying for the members of the Congress, let’s fix this system permanently, no Band-Aids. Let’s do our duty and I believe that when this debate gets moving hard and people get educated about the realities of Social Security, woe be to the politician who doesn’t come to the table and try to come up with a solution.” So make no mistake about it. The president was heckled, by the way, at one of his stops yesterday in Louisville. He was interrupted three times by hecklers, two of whom criticized Social Security. The interruptions were a relatively rare occurrence among crowds that are usually screened but the heckling didn’t stop the president from trying to turn up the pressure on members of both parties. You know, he again said, “When Congress realizes people all over the country say we got a problem, then I pity the politician who stands in the way of the solution.” And I just have to tell you, he’s dead on right about that, and when public opinion turns on this, and it’s going to be the president and Vice President Cheney that do this, when they turn public opinion on it, you’re going to see all of these followers get in line. The Democrats may be the last to go, but there’s some cracks in their armor out there. If you listen very carefully, read between the lines, and read certain places, the Carville memo, Martin Frost, who is no longer in Congress, lost out to Howard Dean for the democratic national committee chairmanship, he’s also saying we got to do something here, we can’t just sit here and do nothing. And there’s more and more Democrats saying this, but the leadership, Dingy Harry and Nancy Pelosi are holding fast in saying, “We’re not going to do anything. We’re not going to do jack diddly. You can keep on talking the rest of you Democrats about how we have to do something.” It’s going to tear the Democrats apart, and folks, I alluded to this in one of my questions to Vice President Cheney.
The left is talking about a 70-year-old plan, and they keep talking about its design. They say Social Security was not designed to be a retirement plan, it was intended to be a safety net. Well what is this not designed? That’s an amazing confession for them to make. A 70-year-old plan and its design is sacred? The left is talking about a 70-year-old plan and therefore we can’t touch it. That means we cannot tamper with the original intent of Social Security. That’s what the Democrats are saying. So I guess we’re to conclude that the original intent of Social Security is sacred but the original intent of our governing document, the Constitution, is not sacred to them. We can find things that are not in it, and say they’re in it. And we can say and look at things that are in it and say, “Well, they shouldn’t be there. The Founding Fathers would have never put that in there if they’d have known what society was going to be like today.” So when it comes to the law of the land, screw original intent. When it comes to one single entitlement within that law that gives the Democrats almost 90% of their political identity and self-esteem, the original intent of that plan cannot be changed.

I mean, the absurdity here is just blaringly loud. I could fill three hours with illustrations of the absurdity here. But as a professional broadcaster, I’ll center on but two. One was Social Security and one that’s unrelated to Social Security. Was Social Security designed to take from many citizens more money in payroll taxes than income taxes? Was it designed to do that? No. Nope. Although I’ll tell you something, I have a theory. I think all this talk about what a wonderful program, “Oh, it’s so compassionate and we have recognized early in our nation’s history the need to supplement the retirement income of our great seniors,” blah, blah, blah, I think this whole thing had — I think the design — if you want to talk about the original intent of Social Security, the original intent is on display with the Democrats’ unwillingness to change it. The original intent of Social Security was to put as many voting senior citizens beholden to the Democratic Party as possible. It was a political move by FDR who not only with this, but he tried to pack the Supreme Court with his own judges and didn’t get away with it. That’s what led to the amendment, 25th Amendment limiting terms of the presidency. You have here a plan that FDR knew full well that if it was not tampered with for long enough, it would become the single biggest ticket to re-election that Democrat politicians would have. Because everybody knows that the older demographics vote in greater numbers than any other demographic, and if you arrange a situation where those members in the older demographic are totally dependent on a single government program for their lifestyles, you own them. You’ve got them. You have them in the palm of your hand. They’re not going anywhere. And all you have to do is threaten the other party with taking that program away and you are sitting in fat city.
And I think the original intent of this program was Democrat Party dominance from now or then as far as the eye could see. And all of the rest of this is a bunch of hocus-pocus. All the compassion that’s supposedly in the program is a bunch of hocus-pocus because I’m telling you, if you listen back just five or six years and you listen to Democrats whining and moaning about Social Security, they make it sound like it’s not enough. People that only have Social Security are basically living in poverty. Remember all the stories about dog food

versus medicine? So what do we do? We came up with a prescription drug entitled for them during the Bush administration to try to lesson the pain so they won’t have to use their precious Social Security income. And what did the Clintons do in 1993? The Clinton tax increase raised the amount of Social Security income that’s subject to taxation, income taxation on the part of recipients. So the Democrats have done a number of things here. They’ve kept a program, basically a poverty level program, they’ve increased taxes on it. They’ve made it so that people who only rely on it basically live in poverty, and today they come and say, “We need to reform the program,” they say, “no problem.” So they basically want to maintain the status quo, the original intent of a program that is guaranteed a poverty — by American standards, anyway — a poverty level lifestyle for those who are recipients of the program.
Here we are in the 21st century, and one of our two major political parties is so backward-looking, they want to stay with the original design of the program. The original design of the program was the original design of our income tax system to withhold taxes so that citizens wouldn’t see how much they’re paying, no. That didn’t start till World War II. The original intent of the first income tax bill — very few people paid income tax and the percentage was what, one or two percent? Talk about original intent! We reform every government program every year. We can’t reform Social Security, the Democrats say. Why not? It’s got to be in as big of trouble as any other government program is after all these years, and we know it is because we fix it every five or six years and say it’s been fixed. But we don’t fix it, we just delay the onset of disaster by another 10 years or so with the smoke and mirrors and budgetary tricks and so forth. They have been talking about how desperately in trouble the program is for a number of years, but now all of a sudden, when they’re threatened with political irrelevance, when their power is waning, when their monopoly they used to have of the mainstream media has been shattered, when they are finally in the minority in the House of Representatives for now 11 years after owning it for 40, when they continue to lose seats in the Senate, they are desperate to hold onto the one thing they think launched them to that never-ending power, and that is Social Security. You can poke holes at their thinking on any aspect of this. You can take any government program that started 20 years ago and say, “Has it been touched or not? Has it been reformed?”
Look at welfare. We’ve had welfare reform. It wasn’t working. We’ve a number of different programs that have come and gone, programs that always change from the income tax system to the Social Security tax system, any number of changes. But Social Security, we must protect the original intent. Why? What was the original intent? Maintaining Democrats in power! And they think if they let go of this program and let it be reformed, their hold on the one program that guarantees them the best guarantee of power is out the window. And that’s why they’re afraid of it, and that’s why they’re opposed to it. The last thing they’re thinking of is Social Security recipients. The last thing they’re thinking of is old mom and pop, mama and paw paw out there basically choosing between Medicare dog food and steak because they couldn’t care less about that. They’re concerned about their own power base and their ability to regain it and they think it’s centered around Social Security remaining the way it is, and they’re so off base on that, it’s another illustration of how out of touch by at least 30 years they are. They’re going to have their hands tied on this. They’re going to be running around in circles. By the time this is all over, they’re not going to know which way is up. In fact, they haven’t seen up in I don’t know how many years. Their whole view is down and they’re heading in that direction and it’s only going to be accelerated by the time the Bush Administration finishes this massive 60-city tour to convince the American people of the need to reform this program as we’ve reformed any number of other government programs. The Democrats are just so focused on themselves, so concerned with their own happiness, their own power, that they cannot see what’s actually happening and they can’t see what would be the best thing for them to do to actually try to become relevant again — all to our benefit by the way.
END TRANSCRIPT