RUSH: This is amazing. This is this morning in Washington, the tenth anniversary celebration of the Million Man March. Here is a portion of remarks made by the Reverend Sharpton. 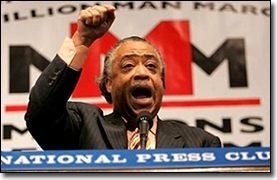 SHARPTON: Leading blacks are appointed by those in power. Black leaders are anointed by God and the masses of our people. But those that don’t want to put the concerns of health care and education and our lack of a constitutional right to vote, and our lack of being able to deal in our community with schools that would educate us, if you don’t want to come, don’t come. But don’t act like you have a new strategy. Don’t act like you figured something out — that we can’t figure out. If you’re scared, say you scared.

RUSH: I’m not scared, Reverend Sharpton. I’m just utterly confused. I have literally no idea what he’s talking about. When he says, “the black leaders anointed by God and the masses of our people,” so with black leaders it’s okay to have them anointed by God but we can’t have George Bush pray to God, we can’t do that. “Leading blacks appointed by those in power but the black leaders are anointed by God and the masses. And those who don’t want to put the concerns of health care and education and our lack of a constitutional right to vote…” is this a time capsule speech? “And our lack of being able to deal with our community with schools that will educate,” Reverend Sharpton, where the hell are you? You know, every time a philanthropist offers the equivalent of tuition to a private school to a number of people, guess who are first in line? Black parents.

They’re sick and tired of the conditions their schools are in, and I’m sorry reverend but it’s your party that’s responsible. Your party has been the party of education for I don’t know how long and every time a reform plan comes up like No Child Left Behind or testing or whatever, guess who sits out there and opposes it? Guess who opposes average middle class people, black and white, being able to go to private schools like the Gores and the Clintons send their kids to? Guess who opposes that?

Your party, sir. Your party opposes it because your party has a vested interest with the teachers union to keep inferior schools open and running. Their concern is not with the student; their concern is with the teachers union. And of course the boondoggle that is federal education, meaning more and more money for it. Up next, the Reverend Jackson, he was also at the tenth anniversary celebration, the Million Man March. These anniversaries the Democrats come up with, last week it was the one year anniversary of Abu Ghraib, today it’s the tenth anniversary of the Million Man March. Here is a portion of the remarks given by the Reverend Jackson.

REVEREND JACKSON: Ten years after the 1995 Million Man March, we asked the nation, “What time is it while we march today?” To stop oppressive judges, our rights, workers’ civil rights are under attack. Why do we march? It didn’t start today, 1619 to 1865, 246 years of legal slavery, a civil war, promises made, promises broken, law changed, culture did not. Free but not equal, and not protected by law. Why did we march?

RUSH: I’ll tell you what, you’ve got people in a time warp is what this means. It means he’s the head of a race industry that cannot admit one smidgen little bit of progress or else he’s out of business, and so he paints a picture of America that’s 200 years old. I guess he doesn’t know how many black mayors there are, how many black police chiefs there are in charge of the law that he says is not fair. I guess he doesn’t see how many black judges that there are. Uh, maybe they’re too conservative for him, I don’t know, but he doesn’t see the black CEOs. He doesn’t see the black entrepreneurs. He doesn’t see any of the progress. He sees none of it. He sees none of the progress being made. This is all liberalism, folks. I don’t care, Million Man March, Abu Ghraib anniversary, it’s all liberalism and it’s all founded in doom and gloom and misery and transferring that to as many of their followers as possible.

They want as many blacks to be agitated and unhappy and angry, thinking they are getting the shaft each and every day regardless of the truth or reality because that’s the only way they can claim and hold onto any kind of political power and hope to advance it. More from the Reverend Sharpton — by the way, Million Man March is about judges. You just heard the Reverend Jackson mention it, and here comes the Reverend Sharpton again talking about it.

SHARPTON: Some of us will not remain silent while you try to stack the courts with judges that want to take back what our grandfathers and our grandmothers went to jail for, bled and suffered, some even died for. You thought we had gone asleep. We might have lost two elections since ten years ago, but we’ve not lost our minds! We’ve not lost our dignity! We’ve not lost our self-esteem!

RUSH: Let’s go to sound bites today from this morning, in Washington, at the tenth anniversary celebration of the Million Man March. 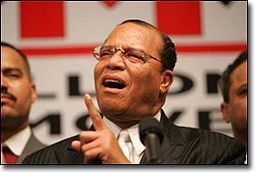 CALYPSO LOUIE: Our listening to Louis Armstrong and Billie Holiday, listening to our artists who gave of their souls, and when we heard their songs and patted our feet to their music, we could go one more day in a vicious America, a vicious America. And after all that we have suffered, we still have a heart of compassion. After all that we have suffered —

CALYPSO LOUIE: — we don’t see the vindictive spirit, wanting to do to others what was done to us.

CALYPSO LOUIE: If anybody deserves to strap a bomb on themselves and give pain for the pain that we have suffered, it is we. But none of us would kill innocent life for political purposes.

RUSH: All right, so that’s Calypso Louie leading it off today at the tenth anniversary of the Million Man March, suggesting if anybody in the world deserves to strap a bomb on themselves and blow themselves up and give pain for the pain they’ve suffered, it is his group. You know, we’re listening to this utter, total insane irrationality. The only thing, you don’t know how many people now might go — I just don’t want to even consider it. I just don’t want to — here’s more of Calypso Louie from this morning.

CALYPSO LOUIE: So for me to be here this morning with my wonderful and esteemed and brilliant brothers and sisters, this is a moment that I live for. A Reverend Jesse Louis Jackson, and a Reverend Al Sharpton and a Julianne Malveaux and Mayor Barry and all of us in the same room, we didn’t come here by ourselves. We were brought here by the suffering of our people. I listen to my brothers and my sisters. I rejoice in my soul because death is hard when you work all your life to see your people free and die seeing them in worse condition.

RUSH: I swear, folks, I do not know what country he’s looking at. This is beyond commentary. Julianne Malveaux, I guess she does belong there. You know what she’s famous for. She wished on TV for Clarence Thomas’ wife to feed him lots of bacon and eggs so he’d have a heart attack and die. And of course it would make sense to Calypso Louie. And who is she? She’s an accomplished woman, probably makes a whole lot of money all over television. Yeah, they haven’t made much progress. Still suffering out there, people still need to be set free, rascals, 1966, all the world over, so easy to see, people everywhere just want to be free. Well, the people who are free somehow are being told that they’re still in shackles and chains still on the plantation and it may be time to strap on some bombs, all this from Calypso Louie. We have two more bites, folks. He really gets rolling here.

CALYPSO LOUIE: This Democratic Party that has a donkey for a symbol, Jesus, he kind of loved donkeys, too, you know. And the master said to his disciples, “Look, go over here, untie them. And if anybody asks you, we know you’re going to be questioned when you start untying the ass, but if anybody asks you, tell them that the master has need of them.” When you’re tied up, through not being utilized properly, that means somebody owns you that has abused the right of ownership. So a new owner then has come, and the new owner told the disciples, “Untie the donkey,” and he rode into Jerusalem on that donkey and they were saying, “Hosanna!” 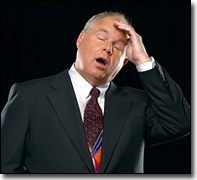 RUSH: A-hem, a-hem. (Interupption.) So hm-hm. They’re saying that the new sign of the Democrats is an ass, yeah. That’s good. He’s also, but he’s saying much more than that, Mr. Snerdley. Calypso Louie is actually out there saying that people are owned. This group he’s talking to, these people are owned, and they’re being abused. The owners are abusing the right of ownership. Now, let’s give him the benefit of the doubt here. Let’s say that the audience at Calypso Louie’s little affair today is in fact owned by somebody. (Preacher voice) “Who, my friends, I’ll say who, who today raises those chains of ownership? Would it not be the Democratic Party? Hosanna, hallelujah, say what it is! ” (Dawn, uncover your face here. This is a parody.) “If there’s anybody who owns, if there’s a white plantation still open today, who’s it run by? Senator Byrd, who used to wear what?

The hood and the robes. Senator Clinton would be part of the ownership group as well, expecting near universal behavior from all those in the shackles and the chains, who don’t get a chance to ride on the ass into Jerusalem because they don’t own an ass. The ass is owned by the plantation master.” And there’s one more, folks, let’s not stop while we’re on a roll. Here’s more from Calypso Louie today.

CALYPSO LOUIE: Because we are in a room like this, because we spoke like this, this morning on television and today on C-SPAN and CNN or whoever would carry it, there are those who would be joyous that at last the negras have come together to use the benefit of the knowledge they received in the colleges and universities and from the great teachers that have come among us to solve their own problems, that’s a blessing to America. But there are others who are threatened that we all are here together. And so one by one they will come to pick us off. “How could you be in a room with bigots?” We live with you. “How could you be in a room with racists?” We been in the room with you for 400 years.

RUSH: Whew. Okay, so there you have it. The tenth anniversary of the Million Man March, celebrated today, barely three days after the one-year anniversary of Abu Ghraib.