Ehrlich Vetoes Bill to Extort Wal-Mart, Flirt with Fascism in the Name of Health Care 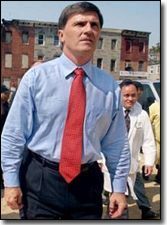 RUSH: (Story) “Governor Robert Ehrlich of Maryland vetoed a bill yesterday that would have forced Wal-Mart to pay a mandatory amount of employee health insurance or potentially cancel plans for a distribution center with 1,000 jobs.” Now, we spoke about this way back when the Maryland legislature passed this bill. They passed legislation that said any company with 10,000 or more employees has to pay at least 8% of their revenues into healthcare and if they pay any less than that, they have to give the balance to the state so the state can hand it out. At the time they passed the legislation, there was one company that had more than 10,000 employees in Maryland and that was Wal-Mart. So it’s clearly targeted at Wal-Mart, and this is a great way of Maryland’s to drum up business in the state, is it not? This is a great way to act as a magnet for other businesses. So Ehrlich promised to veto this, but everybody said, “Well, the Maryland legislature has the votes to override.”
Well, nevertheless, Ehrlich did veto the bill yesterday. He said, “‘The reason I’m going to veto this bill is it threatens the economic health of this terrific county.’ The Republican governor told about 200 people in Somerset County, which has the state’s second highest unemployment rate, 7%. ‘This is a tax bill disguised as a health bill and everybody understands that.’ The so-called Wal-Mart bill officially titled the Fair Share Healthcare Fund Act [laughter] would have forced the company to either spend at least 8% of its payroll on employee healthcare benefits, contribute an equivalent amount to the state’s Medicaid fund, or pay a $250,000 fine. The legislation is being watched by law makers in other states aiming to crack down on Wal-Mart stores. Similar bills have already been proposed in New Jersey and Pennsylvania. In Maryland, the bill and the veto likely will remain a key political issue through next year’s elections, with Republicans portraying the bill as anti-business and Democrats saying the veto was anti-worker. State lawmakers could override the veto when they return to Annapolis in January. Donna Edwards, the secretary and treasurer of Maryland and D.C. AFL-CIO, was among about two dozen union protesters at the event. She said, ‘Wal-Mart has a moral obligation to pay more of its employees’ healthcare premiums.'”
You know, there was a piece in the New York Times not long ago related to this: And of course everybody says, “Well, yes, why can’t Wal-Mart pay more?” I’d like to turn it around. New York Times, why don’t you pay your people more? Washington Post, why don’t you pay your people more? Newsweek, why don’t you pay your people? Why doesn’t everybody pay their people? Of course, it sounds absolutely wonderful. Wal-Mart you can pay more, why don’t you pay more? This is the liberal under-girding of everything. Of course everybody can pay more except them. They’ll fight to the hilt to maintain their own tax breaks at the New York Times company, as they continue to purchase and gobble up smaller properties. Anyway, I wanted to pass this on to you because this is a good guy, Ehrlich, and he’s doing the right thing here and we’ll see if in January — we’ll keep track of this, folks. We don’t forget things on this program. We will see if they do, indeed, override the veto.
BREAK TRANSCRIPT

RUSH: Here’s Chris, Charlottesville, Virginia. Nice to have you on the program, sir.
CALLER: Yes, hi, Rush Limbaugh. Just a quick point on the Wal-Mart healthcare issue in Maryland. I heard you mention the fact that the Democrats are complaining that Wal-Mart has a “moral obligation” to give healthcare to its employees.
RUSH: Yes.
CALLER: But yet they want to do it through the legislature and they always say that you “can’t legislate morality,” which I think is some kind of double standard there.
RUSH: Yes, I would agree.
CALLER: The other thing is that I’m not sure if the legislature has the votes to override the veto, but Ehrlich is actually standing up, putting his political capital on the line, and I think that the Republicans in Washington should take a look at that with this filibuster issue, seeing that, you know, it’s about doing the right thing. It’s not about political power.
RUSH: Well, let’s be easy on the Republicans in Washington on the filibuster. We’re a lot closer to this than many of you thought we ever would be. There’s just a gang of six. Call it a “gang of 12.” That’s what the Washington Post calls them today. Six Democrats, six Republicans. But the Republicans in there, they’re no surprise. Lindsey Graham, John McCain, you name it. They’re all there — and, by the way, Chuck Hagel came out yesterday and said he thinks they all deserve a floor vote. So Hagel is not in the gang. Good move for Senator Hagel and I applaud Senator Hagel for this. We love Senator Hagel here — and he wants to run for president. I think he’s understanding who it is that’s going to vote for him in the primaries if he is to secure the nomination. Nevertheless, we’re a lot closer to this than many of you ever thought we would be. The Republicans, I think, are hanging tough. Just the usual suspects, the usual moderates, the Olympia Snowes and the Susan Collinses and the McCains and so forth are in there trying to gum up the works for themselves and just please the media. Can we be honest? They want a bunch of “attaboys” from the media. Let’s just be honest about it. Lindsey Graham is in the works. John Warner. As to your thing about the Maryland legislature, it’s a nice throwback to these clowns on “you can’t legislate morality” but let me set the table here.
It’s not that Wal-Mart does not pay healthcare benefits. It’s that according to the Maryland legislature, they don’t pay So they’re demanding this legislation, demanding that Wal-Mart pay 8% healthcare benefits and if they don’t, then they must pay whatever. You know, if they pay 6%, then they must make up the difference from 6% and 8% and pay that to the State of Maryland. If they say, “Screw you,” then they get a $250,000 fine. They also have another course of option. They can move or they can reduce their stores to 5,000 employees and make them change the legislation that way. Any number of options

Wal-Mart has. But in terms of saying that it’s legislating morality, it’s a good point. I understand it, but I think there’s a better way to express this. Legislating They are legislating socialism. This is the government — in this case, the state government — telling a private business how it must run its affairs. Now, some might even call that a vestige of fascism. Some might say you’re getting very close to fascism here when the government starts telling everybody in business at an increasing rate how they have to run their business, allocate funds, and so forth. It’s almost extortion to boot, because if Wal-Mart doesn’t do what the legislature says, then Wal-Mart must pay the legislature. So they’re legislating socialism at the Maryland legislature.
BREAK TRANSCRIPT

RUSH: Here’s Cliff in Vacaville, California. Hi, Cliff. Welcome to the program.
CALLER: Hey, good to talk to you, Rush.
RUSH: Yes, sir. Thank you.
CALLER: I’m responding earlier to the topic of Wal-Mart legislation in Maryland.
RUSH: Yes.
CALLER: You went so far as to give the impression that anytime government attempts to legislate pride of business, that’s, you know, bordering on fascism and socialism, and I would argue that in a lot of cases, that legislation is more protectionism of us, the American people, and I’ve never heard you say that in the 15 years on your show. In particular, I’m referencing, you know…my education. I learned about, you know, business practices at the turn of the century through reading — you know, required reading in my liberal education of the book Upton Sinclair’s “The Jungle,” and what I got out of that book is business unchecked — which it had been at that time — after 20 or 30 years of laissez-faire, basically didn’t care about the consumer or the American person and was in it just for the money.
RUSH: Yeah. But the market is what legislates other businesses. The market does this in a free market system. Now, I will agree with you that there are always going to be examples in business, just like in politics or just like in your neighborhood, where there are some people that go to extremes and violate the natural rules of order and they have to be dealt with. But this is the Maryland legislature targeting business! And it’s extorting money from this business. If it doesn’t spend the money on its employees the way they say it should, they’ve got to pay a fine or pay the balance of the money to the state of Maryland. This is not a regulation.
CALLER: Rush, you know, you’ve made me happy as I’ve ever been listening to you. I don’t know the facts of the Maryland case, and I would not — and in general, I would specifically agree that telling a business what benefits to pay seems to be overstepping. And I’m not disagreeing on that. I’m just happy to hear you say that — and I’ve never heard it in 15 years — that, hey, sometimes government regulation of business has a motivation where it does, in fact, help the American consumer and the American person and it’s not all fascism and socialism — and I think I heard you say that a minute or two ago.
RUSH: You did. I’m not going to take it back. I said it’s “vestiges of fascism.” I didn’t say it’s fascist. Look it up. So many people throw fascism and communism and Nazism. Fascism has a specific definition that the left has now broadened to include a whole — basically Fascism is conservatism, if you believe the left. But go look it up and you will see that I’m right. This is dangerously close to it. It’s not it yet. But you say in 15 years that you’ve never heard me come out in favor of regulation. It was just two weeks ago that I said, “We’ve got all these corporations losing tons of billions of dollars and these corporations paying themselves, these CEOs paying themselves millions and multiple millions of dollars,” and I said, “If they don’t do something about this themselves they’re going to invite government control over it, and that’s not good.” This is just another first step, by the way. If the Maryland state legislature can tell you how much you have to pay in healthcare benefits to your employees, they might then decide how much you have to pay them, You know, you talk about a slippery slope? I mean, this is the kind of thing that is a slippery slope.
END TRANSCRIPT