RUSH: Can I read to you what Clarence Thomas wrote? I’ve had a little bit of time here to read the decision. This is in the marijuana pot case that I led the program off with today. 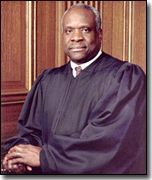 , writing the dissent here. “If Congress can regulate this under the Commerce Clause, then it can regulate virtually anything – and the federal government is no longer one of limited and enumerated powers.” That’s exactly what I said.

If Congress, via now the Supreme Court and this 1942 case that really gave us the New Deal, if interstate commerce can be declared to occur when commerce within one state takes place, then Congress can do anything it wants, the courts can do whatever they want. There are no limited, enumerated powers on the federal government. That’s what Thomas wrote in his dissent and I’m proud to mention this to you because it means my interpretation was right.

“The exemption for cultivation by patients and caregivers can only increase the supply of marijuana in the California market. The likelihood that all such production will promptly terminate when patients recover or will precisely match the patients’ medical needs during their convalescence seems remote; whereas the danger that excesses will satisfy some of the admittedly enormous demand for recreational use seems obvious. Moreover, that the national and international narcotics trade has thrived in the face of vigorous criminal enforcement efforts suggests that no small number of unscrupulous people will make use of the California exemptions to serve their commercial ends whenever it is feasible to do so.” –Justice John Paul Stevens, writing for the majority.

“Diane Monson and Angel Raich use marijuana that has never been bought or sold, that has never crossed state lines, and that has had no demonstrable effect on the national market for marijuana. If Congress can regulate this under the Commerce Clause, then it can regulate virtually anything — and the federal government is no longer one of limited and enumerated powers.” –Justice Clarence Thomas, dissenting.

“Relying on Congress’ abstract assertions, the court has endorsed making it a federal crime to grow small amounts of marijuana in one’s own home for one’s own medicinal use. This overreaching stifles an express choice by some states, concerned for the lives and liberties of their people, to regulate medical marijuana differently. If I were a California citizen, I would not have voted for the medical marijuana ballot initiative; if I were a California legislator I would not have supported the Compassionate Use Act. But whatever the wisdom of California’s experiment with medical marijuana, the federalism principles that have driven our Commerce Clause cases require that room for experiment be protected in this case.” –Justice Sandra Day O’Connor, dissenting.

“Not only is it impossible to distinguish “controlled substances manufactured and distributed intrastate” from “controlled substances manufactured and distributed interstate,” but it hardly makes sense to speak in such terms. Drugs like marijuana are fungible commodities. As the court explains, marijuana that is grown at home and possessed for personal use is never more than an instant from the interstate market — and this is so whether or not the possession is for medicinal use or lawful use under the laws of a particular state. Congress need not accept on faith that state law will be effective in maintaining a strict division between a lawful market for ‘medical’ marijuana and the more general marijuana market.” –Justice Antonin Scalia, concurring.
——————————————————————————–

“The majority prevents states like California from devising drug policies that they have concluded provide much-needed respite to the seriously ill. … Our federalist system, properly understood, allows California and a growing number of other states to decide for themselves how to safeguard the health and welfare of their citizens.” –Thomas in dissent.

“The case is made difficult by (the California women’s) strong arguments that they will suffer irreparable harm because, despite a congressional finding to the contrary, marijuana does have valid therapeutic purposes. The question before us, however, is not whether it is wise to enforce the statute in these circumstances; rather, it is whether Congress’ power to regulate interstate markets for medicinal substances encompasses the portions of those markets that are supplied with drugs produced and consumed locally. Well-settled law controls our answer. The CSA is a valid exercise of federal power, even as applied to the troubling facts of this case.” –Stevens in the main opinion.