El Rushbo: Much More Than a Journalist

RUSH: Greetings and welcome, ladies and gentlemen. It’s the award-winning, thrill-packed, ever-exciting, increasingly popular, growing-by-leaps-and-bounds Rush Limbaugh program, where nearly as many Americans consider me to be a journalist as they do Bob Woodward. Did you see this yesterday in the Washington Post today and the AP? Here’s the telephone number, by the way, 800-282-2882, the e-mail address Rush@eibnet.com. So I’m sitting here yesterday afternoon minding my own business and bothering nobody, and I get this e-mail from the PR people, and they say that our old buddy Will Lester at the Associated Press wants a comment on this latest Annenberg survey that shows 27% of the people in America consider me a journalist; 55% don’t, and something like 17% don’t know. And 30% think Bob Woodward is, and 55% don’t know, and 17% think he’s not or what have you. They wanted my comments on this, and then Howard Kurtz of the Washington Post sent me an e-mail shortly after and wanted my comments on this. They both gave me about a half hour to react to it if I wanted to react to it. I thought, “Well…” I was conflicted, I was really conflicted, I mean, I’m not a journalist. 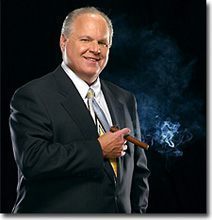 I’ve never pretended to be a journalist. For one thing I laugh. For one thing I enjoy life. You know, I’m not dour, I’m not filled with doom and gloom, I’m not a pessimist, I don’t dislike the country, and I don’t suspect my country’s guilty every time there’s some sort of international conflict. I’m not a journalist. But I am America’s anchorman. I am America’s anchorman and for nearly 17 years I’ve been doing play-by-play of the news here. So I wrote them that, I said, “I’m not surprised, I’m America’s anchorman, I’ve been doing play-by-play of the news for 17 years and I think this is just further evidence that the monopoly-like existence of the old media is finished.” And Kathleen Hall Jamieson, who is the Dean of the Annenberg School, runs this division, said that there’s a huge disconnect out there between what the American people consider a journalist to be and what journalists consider a journalist to be. I said that’s right, and I said I think the journalists, the mainstream media ought to really heed her warnings and try to understand how the viewers and readers of their work see them these days. But to be considered a journalist, you know, I never wanted to be a journalist. I’m an advocate. I’m a commentator. I mean, I do so much more than just journalism. I do tell people things they don’t know. I mean, that is the strict definition of a journalist. I even looked it up in the dictionary, just to be sure — you never know what the dictionary definition of a term is going to be these days — and it said: somebody who writes news for broadcast on radio or TV. So the broadcasters themselves are not journalists. The people who write it are, so the people who put the TelePromTer together for the evening news anchors are the journalists. Well, that’s according to the dictionary definition. But anyway, you can count on the fact that our buddies in journalism (interruption) — no, it did include — people who write for newspapers are automatically included, but it said people who write for radio and TV broadcasts. It didn’t say broadcasters are journalists, rather the people who write for them. But it was a foregone conclusion that reporters and so forth are journalists.
I just know the mainstream press is pulling its hair out over this. What really got them is that 40% said Bill O’Reilly is a journalist and that’s going to really T them off, especially when Woodward chimes in there with like 30% considering him a journalist and a whole bunch don’t know and a whole bunch disagree, don’t think that he is. Nevertheless that’s out there. Drudge has linked to the Washington Post version of this, the Howard Kurtz story, and the AP’s got it floating around on all their various links out there that you can find it in various newspaper sites and so forth.
END TRANSCRIPT