Get Out of Iraq Crowd Suffers Stinging Defeat 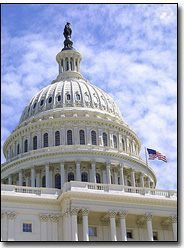 RUSH: Heads up, the Get Out of Iraq Caucus! The Democrats voted last night to get rid of Congressman William Jefferson (Democrat-Louisiana) from the Ways and Means Committee and just now, mere moments ago, the whole House did the same thing. So Congressman William Jefferson (Democrat-Louisiana) has been stripped of his post on the House Ways and Means Committee, with Nancy Pelosi again referencing the fact that any time you’ve got $90,000 in cash in your freezer, that there’s something definitely wrong there, at least on the ethical side. I again affirm my position with the Congressional Black Caucus that this action is premature based on the fact that there is no charge. There’s no indictment, certainly no conviction.
We also have, ladies and gentlemen, the House completed its vote today authorizing the — I guess you’d say — what would you call this thing? What was this resolution? The stay-the-course resolution in Iraq — and the Senate did this yesterday. (Laughing.) You know how it happened in the Senate? John Kerry has been running around talking about he’s going to get one of these resolutions up for vote in the Senate, but he didn’t actually put the resolution to the floor, take it up to the floor and put it up for a vote, because he was out there coalescing support for it. So Mitch McConnell simply went to John Kerry’s resolution, scratched Kerry’s name off and put his name on it and took it to Frist. They took it to the floor and they voted on it — and Democrats voted to get out of Iraq. In the House today, the vote was 256 to 153.
I guess you could say that the Democrats are voting to set a timetable to remove the troops. So it was 256-153 and get this. There were 42 Democrats that voted for the resolution, 42 Democrats that voted with Republicans. Three Republicans voted against the resolution, voted with Democrats. You know, this is the biggest divide in House Democrat Caucus in I don’t know in how long, but it may be like five or six years. Maybe in this presidency. I’ll have to double-check this, but this is the biggest defection, the biggest number of defections the Democrats have had on a single issue, losing 42 Democrats in a vote with Republicans — and we know why. It’s because everybody in the House is up for reelection. Those 42 are, more than likely, from conservative districts even though they are Democrats. So what was funny about this was to listen to all the caterwauling.

See, the Democrats originally asked for this. This really is not done often. This is not something that has a lot of precedent. The Democrats were asking for this a week or two ago when they were really pumped up and feeling their oats and Bush’s approval numbers are way down and it was looking bad. They wanted to go to the floor, and they wanted to get themselves on record just like they wanted to get themselves on record in 2002 for the Iraq resolution. This time, with a new election coming up, they wanted to get themselves on record as against it, and the Republicans said (paraphrased exchange), “Okay, but we’re going to make it on the entire war on terror.”
Then the events of last week into this week occurred, and the Democrats said, “Wait a minute! We don’t want this now.”
The Republicans said, “Well, you asked for it; we’re going to do it.”
“No! You’re just trying to trick us,” the Democrats said.
But let me give you the correct analysis and rundown on this. If you listen to the Democrats, they come off like pure egomaniacs. They sound like this vote is about
Yesterday or the day before, “You’re trying to trick us.” Why, everything that was going on regarding this vote, particularly in the House, was about them, The Drive-By Media thinks the vote is all about politics. I have newspaper stories here in the stack, and the political analysis of all this is all we’re getting. It’s like the war is just a particular policy, and that it’s no different than Social Security reform or health care reform or what have you. I always knew the left was ego-driven, folks, but I didn’t really know they were ego-. The vote in the Senate yesterday and the vote in the House today, were really not designed to embarrass Democrats because you don’t have to design that. That’s going to happen anyway when you schedule a vote on the military or on the war. Democrats are going to embarrass themselves regardless, so you don’t have to set that up. That doesn’t have to be your design. You know what the purpose was of these two votes? 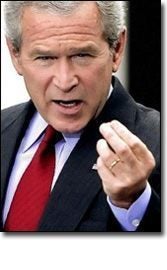 The purpose was to send a signal to the Middle East, to send a signal to our allies and to our enemies, to the terrorists, to the insurgents, to the criminals, to the Islamist fanatics that Congress backs the president, that we are not going to cut and run, that we can stop this stupid split-screen presentation of Jack Murtha and George Bush. They got Bush saying this and Murtha saying that. There’s been a vote now, and the purpose of this vote was to tell the world: “Don’t listen to the Democrats. Wwe’re not going to cut and run. We’re not setting timetables. We’re not getting out of there. They don’t make policy.” Newcomers to democracy think a TV split-screen rules. On the one hand, stay the course. On the other hand, cut and run, and the people around the world watching this, of course, can get the idea that the cut-and-run crowd carries the day, because who gets more TV time, Nancy Pelosi or Denny Hastert? Who gets more TV time, Dingy Harry or Bill Frist? Okay, so you would think that the Democrats, if you just landed from Mars or if you are practically — let’s say you’re in Iran, you may as well be on Mars — let’s say you’re watching the news and after every event that happens around the world. All you see is Dingy Harry and Pelosi.
Who you gonna think runs the show? They don’t seek out Hastert; they don’t seek out Frist. They’re constantly seeking out the with a capital M. So the purpose of this vote was to tell the world, “Screw the minority. They’re not making policy. They don’t set policy.” We have had a vote in both chambers of our Congress, and we are not cutting and running. These votes show that the split-screen is not the reality. This vote is intended to show the Middle East and the rest of the world, in the Senate: “The cut-and-run mob gets six votes. Six out of 100! In the House, they got 153 votes, out of 435.” How in the world is anyone of any political persuasion, anyone, get through to these liberals and Democrats that this war is about them? It’s not about their need to get back into power. It’s just not — and yet they don’t get it. That’s the purpose of the vote. The purpose was not to embarrass the Democrats — again, as I say: because, ladies and gentlemen, you don’t have to design that. That will happen on its own.
BREAK TRANSCRIPT

As I mentioned, ladies and gentlemen, 42 Democrats joined Republicans to vote for this stay-the-course resolution in Iraq. That’s the biggest divide in the Democratic Party, I think, during Bush’s term in a House vote, and what does it say about Democrat unity? (Laughing.) It says there isn’t any! You know, what does it say about what the American people’s view on the war is? Forty-two Democrats up for reelection know their districts, know their constituents. These Democrats wanted to be on the side of the US military and this war effort because they want to be reelected. The House is a great way to gauge where the American people are. You could also say only 42 Democrats out of however many they’ve got have the guts to stand up for America, to stand up for the troops.
There are any number of ways you can look at it, but beyond that, they are divided — and so next time you hear these people talking about “unity,” you can forget that. It’ll be fun to troll the left-wing blogs to get the reaction once the roll call vote’s made public of these 42 Democrats and see what’s in store for them. (interruption) Well, three Republicans voted NO, but you know where those Republicans are going to be from. (interruption) I don’t know which ones they are, but [ Duncan, Leach, Paul ]. Oh, we got a story here about Chris Shays. I’m not going to get to it for a while but he’s whining — he’s got a big, tough reelection battle up there, moderate Republican in Connecticut, and his Democrat opponent is a woman, and then she — ah, it’s a pretty tight race right now. He’s whining and blaming the president. (Crying.) “The president doing hardly anything. The president isn’t helping me.” When is the last time helped the president? I’ll tell you, sometimes the arrogance of these guys is just even a bit much for me to take. Ladies and gentlemen, in all this talk about cutting and running, I want to assure you of one thing. I am not going to cede the reins of EIB. I have committed to you that I’m not leaving until every American agrees with me. That means I’m not going to leave until every liberal sees the light. Every liberal except for two, and that’s another story. There are two of them that are impossible.

One more thing about this vote today in the House. Basically it was a resolution refusing to set timetables to get out of Iraq. Forty-two Democrats joined with Republicans in voting for

the resolution. The resolution also linked the war on terror with the war in Iraq. Now, everybody knew what the vote was going to be or pretty close to what the vote was going to be yet our old buddy Ronald Brownstein in the LA Times had this incredulous, I’m incredulous over this story. Here’s the headline. Iraq debate pits uncertainty against anxiety. The new Republican drive to focus on the Iraq war represents a high stakes gamble that doubts about the direction Democrats might set on national security exceed anxieties about the course charted by — what gamble, Ron? Where do you get out of the Beltway, Ron.
That’s no gamble. Doubts about the direction Democrats might set on national security — people walk around — you wanted — you think people are braced for hurricanes, people are braced for Democrats controlling the national security apparatus. It’s no gamble, Ron. Why do you think they did this? Forty-two Democrats joined them, Ron. I know he wrote the story before the vote but they knew how this was going to come out. In the process, writes Mr. Brownstein, Republicans risk deepening their identification with a war that surveys show still spark — Ron, stop reading the polls and get out there, get a visa and go to Missouri or go to Iowa, go to Oklahoma and find out what people really think, outside of your surveys. The House of Representatives is a barometer of where the American people are. Forty-two Democrats joining the Republicans. Those 42 Democrats are up for reelection. I mean, this is hilarious, that he actually thinks Republicans are taking a gamble with this resolution. This shows the Democrats have no unity, period, on this issue at all.
END TRANSCRIPT