RUSH: Wall Street Journal today has an editorial about Judith Miller and Matt Cooper, and the prospect that they might be going to jail. Looks like Matt Cooper won’t be because TIME is going to turn over the relevant documents that the court wants revealing their sources, and the rest of the media is just in a shambles over this; the rest of the media just doesn’t get it. They’re upset about it. The Wall Street Journal actually has a pretty good take on this. The subhead is: “The press corps unleashed a prosecutor on itself.” You know, this really is true. The press really has only itself to blame for this when you stop and think about it. After all, what happened? Robert Novak has a confidential source. The confidential source, somewhere high ranking, told him the name of a CIA agent, and he published it. All hell broke loose. “You can’t do that! Why, that’s a crime! Why, you can’t protect. You can’t reveal!” The media normally would circle the wagons around Novak, except Novak is a conservative. So rather than circle the wagons around Novak the media circled the wagons around Dan Rather and Newsweek. The media demanded a special prosecutor. The media demanded an investigation. Why? Because Novak’s a conservative commentator. His source is likely an administration official, and the media wanted to know. The hell with confidentiality when a conservative is involved. So the same media that had an orgy of defense for Bob Woodward and Carl Bernstein and Deep Throat and all the other confidential hours there have been in lib media history. 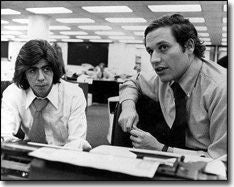 The same media that showed their willingness to go to the mat to protect Woodward and Bernstein and Newsweek and so forth, showing a double standard and agitating for disclosure. Oh, yes, the media, yes, they had to know who was talking about to Novak. Why aren’t those people talking to us? Novak is conservative. We want to find out who’s talking to him. Have you not been sort of humored by the number of press people demanding that Novak reveal his source? “Why, Novak could stop this tomorrow, if he would just reveal his source.” Nobody would ever say that about Matt Cooper or Judith Miller or any other liberal media person. So what we have here is a prosecutor who is taking steps far out of proportion to what’s required here, given that it’s doubtful a crime was committed. Ahem! I’ll say this again. We have a prosecutor taking steps far out of proportion to what’s required, given that it’s doubtful a crime was committed, when information was provided to Novak in the first place. And these two have come to a head now and it makes both of them look pretty pathetic to me. I don’t think the prosecutor looks particularly good here. I think the media, the Wall Street Journal, brought this on themselves by demanding to know who Novak’s source was and demanding that Novak be forced to release it, and so the administration heard those calls, and this administration is responsive to the media, folks, oh, you want to know who Novak’s source was? Well, it wasn’t us, but we’ll gladly appoint a special prosecutor, we’ll have an investigation, and look who it ended up snaring, two lib reporters and not Novak. So in a way, in a purely human sense, you sit back and laugh at it. But when you get through with that, it’s just pathetic.
The Los Angeles Times today: “Many in media criticize TIME’s move. Some say the decision of TIME to reveal sources confirms fears that corporate ownership is a threat to press freedom. Others contend the magazine had no choice. Journalists and media observers voiced anger and dismay Thursday over the decision by the publisher of TIME Magazine to give information about one of its reporters’ confidential sources to a grand jury. Some said the announcement by Norman Pearlstine, TIME Inc.’s editor in chief confirm their fears that increasing corporate ownership of media organizations had become a threat to press freedom. But others said that TIME had no choice but to comply with a lower court ruling and turn over the information after the US Supreme Court declined to review the case. ‘For 30 years,’ said David Halberstam, a Pulitzer Prize winning reporter and author, ‘we’ve assumed that strong journalistic institutions would stick together and protect their employees. Now a new wind is blowing and that united front is gone.'” Oh, isn’t that rich. You’re still circling the wagons, Mr. Halberstam, it just depends. It’s got to be Dan Rather and Newsweek. You won’t circle the wagons around Novak as we’ve just illustrated. Yeah, I think the media is in its last throes. I think all of this indicates that some of these critics may have a point about this corporate ownership, but they’re missing what the real point is. See, journalists traditionally don’t have to face any bottom line pressure, meaning financial bottom line. Most elite journalists think that they should be paid whether the company they work for makes money or not. They think they should get health benefits, time to walk the dog, dental benefits, and a pension, whether their company makes money or not because their mission is important. Why, they are the defenders of the very country in which we live and breathe! Why, journalists are the defenders of the very Constitution — even though none of them seem to understand it anymore. I’ll never forget Lawrence Tish, a businessman from top to bottom, took over CBS. He looked at the news division saw all the red ink and said, “Okay we got to get rid of 200 people.”

No, they don’t want to have any responsibility for the bottom line, profit, loss. It doesn’t make any difference to them whatsoever. So here comes Norman Pearlstine, “Well, the law is the law. The Supreme Court says we gotta do this, and, you know, whether we like it or not, we enjoy our freedoms because of that very Constitution. We’ve got to obey it.” What he didn’t say was that if they didn’t obey it in addition to jail time there would be huge fines, and the fines could have negative impact on TIME Inc., shareholders, on TIME’s bottom line, and so from that standpoint is may well be the corporate ownership, but there’s always somebody of a corporate nature that has always owned the media. So this is a straw dog. I think what this illustrates is that most journalists couldn’t care less whether the people they work for make any money or not. They don’t think it matters, certainly not to whether they get paid or not. You know, and the shareholders and board of directors may be a threat to journalism is what the claim here, “Oh, yeah, this is a threat to doing real journalism.” Sometimes the public is a threat to doing real journalism, too, when they refuse to believe some of the garbage that is printed or broadcast. So you could say the public is a threat to journalism. If you’re a journalist today and you work at one of the big three broadcast networks or one of the two or four big newspapers — well, any newspaper now — if you’re a big-time journalist that works in a couple of the cable networks and you are losing readers and circulation and viewers in record numbers, wouldn’t you have to conclude that the public is a threat to journalism, too?
“Well, those damned upstarts, they’re not watching us! Who do the American people think they are? They’re not reading us!” So it’s easy to pick holes with every argument that they would make. Here is Orville Shell. Orville Schell is the dean of the UC Berkeley graduate school of journalism. He said, “I can’t believe there will be too many anonymous whistle-blowers who will want to communicate with Matt Cooper knowing that he can be burned and turned in by Norman Pearlstine. What happened at TIME Inc. is clearly troubling for anybody who values the watchdog function of the media.” We had a caller yesterday who made a great point. Why do these people protect sources that end up screwing them? The one case we could think of is because maybe the source is a woman that the reporter is chasing, has got the hots for. You never know. I mean, these kinds of things happen. Let’s see, who else do I have a quote here from. Ba-da ba-da ba-da ba-da. Well, that’s pretty much it, and then the LA Times has one more story. We’ll have to do that in just a second. So What’s the Story on Novak? It’s actually a column by Jonathan Turley, a pretty lib legal analyst who gets passed off as a moderate conservative sometimes but he’s a professor at George Washington University Law School, and he’s all upset that Novak seems to be unscathed here.
END TRANSCRIPT