Appoint an Originalist, Not An Activist

RUSH: All right, now, I know the judge deal is a big thing but it’s not going to happen for a while. I know a lot of people are worked up about this. I’m one of them. But I must be honest with you. I have a little bit of a different attitude about this than I thought I was going to have. I don’t find myself all worked up about it yet because nothing that has happened is unpredictable. You have — and I’m going to mention it. You have Chuck Schumer demanding a judge summit with the White House. Democrats demanding to sit in on the selection process, which the Constitution does not allow them; the Constitution does not permit. In fact, if you read up, as I have done, ladies and gentlemen, go back and read — I think it was Hamilton, Alexander Hamilton, the Founding Fathers — the reason the Senate did not have anything other than an “advise and consent role,” the original thinking of the Founders was that, “Okay, let them reject a judge. The result is they’re just going to get another one they don’t like,” and the idea is to end up having the Senate not rubber stamp but approve these people and send them on. The purpose is not for the White House to send a judge up that the Senate The purpose here is for the Senate to realize that if they reject this they’re going to get the same thing back; if they reject that they’re going to get the same thing back. That was part of the original thinking of the Founders in this whole advise-and-consent business. Now you listen to the Democrats today and that’s gone out the window as has much of the original intent of the Constitution, and the point now — I’ll tell you what worries me as always worries me about this.
It’s not the Ted Kennedys, just like the war in Iraq. I said last week: It’s not the Ted Kennedys and the Bidens, and these people are utterly predictable, the People for the American Way, the Alliance for Justice, the NAGs, the NOW gang. We all know what they’re going to do. The thing about this that causes me the greatest concern is when I hear people like Orrin Hatch say what he said on Good Morning America today, or when I hear Arlen Specter continue to rip to shreds Robert Bork. When I hear Republicans say what they’re saying about this, that’s when I get queasy — and all this money that’s being spent by these interest groups on both sides, it just amazes me. You know me. I’m a big believer in

having an informed public, but the public is not going to make this choice, and I don’t think one dime spent is going to influence who Bush picks. I really don’t think so. In fact, the conservatives are out there saying, “You better not pick Gonzales! You better not move him from the attorney general’s office up the street. You better not.” Conservatives don’t like this guy. He’s not an originalist; he may be pro-choice, and Bush finally heard enough of it, said, “Shut up about Gonzales. He’s a friend of mine. I’m going to do what I’m going to do. If I pick Gonzales, I’m going to pick Gonzales. He’s a fine man. Shut up about it.” He’s sending that message out to the base. See, the one thing the base — you people in the base, we all in the base better understand — I know Bush said what he said during the campaign, and I know many of us rallied during both of these campaigns for this exact reason, the next justice or two or three on the Supreme Court.
Bush isn’t running for anything again. If Bush wants to blow off the base, he can blow off the base. I don’t see Bush trying to establish a big conservative movement in the country, like Ronald Reagan did. The thing you worry about in second terms is legacies. You know: Does the president want a legacy? I’ve got a couple stories. One of them I think USA Today, Kathy Kiely, I’ll get to it in detail in a moment, “This pick will contribute to Bush’s legacy.” Now, I think if the president has and desires a legacy to turn this court around, we’ll be fine. If his legacy is to have the immediate, instant writers of history — which are the American left today — write great things about him then it’s going to be a pick we don’t like. But at this point I’m going to sit back. I’m going to wait and see what the president does. I’ve trusted him on these kinds of things. The appellate judges he sent up have been good; the circuit judges he’s sent up have been good. There’s no reason to panic yet here. There’s no reason. There’s no reason for all this, “Oh, my God! Oh, my God!” There’s no reason for the knife over the wrist here waiting to slit yourself, folks. We haven’t gotten there yet. I think this is a time for cool, reason and reaction, when it is appropriate. But there’s really not a whole lot to react to yet except the usual suspects on the left and the usual suspects on the right — and we will do so.
BREAK TRANSCRIPT

RUSH: Here’s Mike in Aurora, Illinois. Hello, sir. Welcome to the EIB Network.
CALLER: Rush, hey, great to talk to you.
RUSH: Thank you, sir.
CALLER: My question is concerning the stepping down of Sandra Day O’Connor.
RUSH: Yes.
CALLER: And I’d like to know — basically I’d like to get your take on whether you think Bush has the political capital or the political clout to be able to get a conservative in there, someone of his ideological preference, without having to yield to all these other considerations, you know, whether it’s a woman or a Hispanic or a minority. You follow what I’m saying?
RUSH: Yeah, he’s got the political capital to do it.
CALLER: But —
RUSH: He can do what he wants. That’s exactly what he should do. But, I’ll tell you what, I think we need to change terms. Orrin Hatch was on Good Morning America talking about Bush, “Bush will nominate a conservative, I’m confident of that but he won’t nominate a right-wing conservative.” I threw my glasses down. What!
CALLER: Can he get through with it?
RUSH: What?
CALLER: I mean, can he get through with it? Do you think it will — does he have the backing from the Senate and whatever all other means to have this person approved? 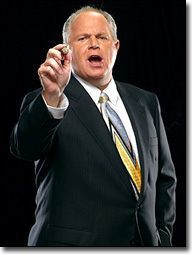 RUSH: Yes, take the fight to them. Absolutely. Whether he’s got it or not, go out and make it happen. For crying out loud, I’m tired of I’m tired of these Democrats acting like they won the election. Somebody needs to stand up and say, “When you win the election, you pick the nominees. Until then, Just shut up! Just go away! Bury yourselves in your rat holes and don’t come out till you win an election. When you win election, you can put all these socialist wackos like Ruth Bader Ginsburg and Stephen Breyer all over the court but until then You are really irritating me.” I’m getting sick and tired of Chuck Schumer saying there needs to be a summit. I’m getting tired of Biden saying we’re going to filibuster. Go ahead. I’m ready for you people to kill yourselves politically. I’m ready for you to commit suicide. The Democratic Party and the liberal wing are on a steady nosedive and I hope Bush nominates somebody that irritates them so much that Ted Kennedy comes out with another Robert Bork-like statement because that will finish them off. These people are in their death throes, folks, I’m telling you. The left are in their death throes. You can see it. They know it. The desperation is all over the place so screw all this talk of capital — and screw all this talk of conservative versus liberal. Let’s get an on there. It’s originalist versus activist. When you hear the liberals say, “We need a pragmatist and we need a centrist,” what you’re hearing them say is, “We need an activist,” and when you hear them say, “We can’t have these conservatives and these right-wingers on there.” What you’re hearing is, “We can’t have an originalists! Why, that would screw us!” So, yeah, he’s got all kinds of capital. He can do whatever he wants to. He’s the president of the United States. He nominates these people, and then let the Senate have at it, and if the liberals filibuster this, if the liberals torpedo this I’m telling you, folks, they’re going to show up on the polls in 2006 and they’re going to get fewer votes and they’re going to get fewer votes in 2008. You know, the Bush administration is looking at three open seats here and this is just the first. Rehnquist is next and there’s talk that Ruth Bader Ginsburg is not very healthy at all. She may, in fact, be less well than Rehnquist is. And, you know, talking Gonzales would be the third pick if it goes that far, but as I say, what worries me is Orrin Hatch on Good Morning America says, “He’ll nominate a conservative but I don’t think a right-winger.” Orrin, if they nominated you they’d call you a right-wing conservative. What are you talking about? I don’t understand that at all, at all.
END TRANSCRIPT