RUSH: Somebody said in the last hour that this Rove thing has taken the Supreme Court off the front page. It really hasn’t. Mike, grab audio sound bites 16, 17, and 18. We have some audio from yesterday and this morning about this subject. Let’s go to the White House this morning, President Bush and India’s prime minister held a joint press conference. Reuters reporter Adam Entous says, “We understand you’re now close to a decision on the Supreme Court nominee, sir.” 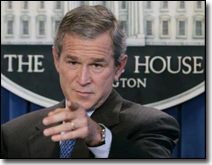 BUSH: Really? (Laughter.) Well, thank you for telling me where I am in the process. I appreciate that. We’ve consulted with the Senate, we will continue to consult with the Senate. I, of course, am the person that picks the nominee and they get to decide whether or not the nominee gets confirmed. That’s the way it has worked in the past, that’s the way it’s going to work in this administration. This is a really important decision and I’m going to take my time, and I will be thorough and deliberate. But make no mistake, we’ve heard a lot of suggestions from members of the United States Senate. A lot. As it turns out, many of the senators have strong opinions one way or the other, and of course we’re listening to them, and if that’s the backstop, we’re working back to try to accommodate the Senate and their desire. Part of the consultation was to ask the senators, you know, what’s it take to get somebody in place by the October session? Thank you for your question, and thank you for telling me how close I am to — or at least indicating what others think.
RUSH: And that has been reported today that the president is going to have a name by the end of this week. I think that’s what the reporter was referring to. Now, I wouldn’t get too concerned here, folks, about the president saying he’s consulting with the Senate. The key line there is, he’s going to pick the nominee, and they will get to vote to confirm or not. I think all of this is simply to show how cooperative he’s willing to be even with these little Chihuahuas nipping at his heels. He’s going to do what he can to show the American people he’s working together. He does not speak in a partisan way, he does not speak in a confrontational way. Only the Democrats do that. It’s just going to be another nail in their coffin because the one thing he knows, that no matter who he nominates, unless it’s one of the names that Dingy Harry gave him, unless it’s one of those people, they’re going to just go to town. They won’t be able to help themselves. They literally won’t be able to help themselves. Now, yesterday on Face the Nation with Bob Schieffer, the guest is Chuck Schumer, who’s everywhere. He’s with Joe Wilson, he probably took Valerie Wilson to dinner one night last week when Joe was on TV — who knows, he’s all over the place. Put a camera there and you can be guaranteed to find Chuck Schumer, and who outside of New York cares? He’s exactly the wrong guy for the Democrats to be using as a point man on anything, but they will keep doing it. So Bob Schieffer says, “The nomination to the Supreme Court to replace Justice O’Connor. Do you think this needs to be done sooner rather than later? Do you believe the president ought to share with you, those of you who will confirm the next nomination, the list of people he’s considering before he names a nominee?”

JUNIOR SENATOR: Those are both good questions, and the answer to both is yes. I think the president has to get us a name by August 1st if we’re going to meet the goal of having someone in place by October 1st and that’s because you need about a month to actually just do all the research, looking at the nominee’s entire history, their writings, their philosophy, et cetera.
RUSH: As if they haven’t already done that. They’ve got a dossier on probably a thousand people. And they’re ready to go to town to destroy every one of them that they think Bush might nominate. So here’s Schumer, he’s giving President Bush’s deadlines, gotta be by August 1st. But what a sycophant question from a sorry excuse for a journalist, Bob Schieffer. He knows the Constitution as well as anybody else, and if he’s going to ask this question the right way, the question should be, “What are you Democrats demanding that you be consulted with on a pick for the Supreme Court? The Constitution says the president gets the nominations, and that’s what elections are all about. You guys didn’t win the election. Why in the world do you think you have a role at all in selecting the nominee?” But, no, that’s not what we got from Schieffer, because he’s one of this gang. He says, “You believe the president ought to share with those of you who will confirm this next nomination the list of people he’s considering before he names a nominee?” Oh, yes, yes, yeah, like that’s done all the time. You just have to remember here, folks, as far as these people are concerned, Bush is a criminal because he’s a Republican. He’s an even worse criminal because he’s the president. Conservatives, conservatism, conservative ideology, all criminal, according to Democrats. It’s all out of the mainstream. It’s just the continuation of the attempted criminalization of Republican policy and conservative policy. Then in this next bite, Schumer denies that he and the Democrats are going to go to war over the nominee. Jan Crawford Greenburg, participating journalist on the Nation, she’s of the Chicago Tribune. She said, “Senator Schumer, you’ve suggested there’s going to be a war, no matter what, you’ve been quoted saying that as have other Democrats. Does that send a signal to the White House that it may not need to reach a consensus nominee, and perhaps nominate somebody as conservative as possible, since there’s going to be a battle no matter what?” 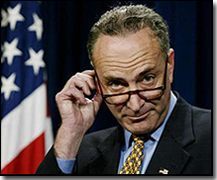