RUSH: Tom in Chicago. We have our first liberal on the phone today ? it says you are – welcome to the program, sir.
CALLER: Hello. I’m just calling to let you know that earlier in the show you said something about how the media seems to be twisting that Bush changed his position on the leaker, that he would fire him. I saw them clearly ask, “Do you stand by your pledge to fire anyone in the administration found to be involved in this leak.” [sic] He clearly heard it and he clearly said, “Yes.”
RUSH: Who?
CALLER: I believe it was an ABC reporter. I’m not sure.
RUSH: I have both Bush statements here. Even the Washington Post, who is it writing about this today? Maybe it is Terry Hunt of the AP, but whoever I read, says it is a very, very, very, very fine distinction, a difference between the two statements. I myself don’t see much. Tom, hang on just a second. Let’s listen to these. Let’s go back to September 30, 2003. Let’s start with cut two. Mike, this is what the president said about leaks in his administration.

BUSH: If there is a leak out of my administration I want to know who it is, and if that person has violated law, that person will be taken care of.
RUSH: All right. Now, let’s define something here: “If the person has violated the law, the person will be taken care of.” What is a violation of the law? If you violate the law and you are convicted, what does it make you? It makes you a criminal. That?s how I interpret this. This bite shows the utter disrespect of the White House press corps for the president because they just start laughing after he gets his answer started. But the question came from, in fact, Terrence Hunt, Associated Press, “Mr. President, you said that you don’t want to talk about an ongoing investigation so I would like to ask you regardless of whether a crime was committed.” Well, regardless of whether a crime was committed? He never said anything about it unless a crime was committed. So the question is a bit of a set up. It is the press trying to change the goal posts. It is the media trying to move the goal posts a little closer so that they can kick their field goal with more ease. That is what this “regardless of whether a crime was committed, do you still intend to fire anyone found to be involved in the CIA leak case” is.

BUSH: We have a serious ongoing investigation here (laughter) and it is being played out in the press — and I think it is best that people wait until the investigation is complete before you jump to conclusions, and I will do so as well. I don’t know all of the facts. I want to know all of the facts. The best place for the facts to be done is by someone spending time investigating it. I would like this to end as quickly as possible so we know the facts and if someone committed a crime, they will no longer work in my administration.

BUSH: If there is a leak out of my administration, I want to know who it is — and if that person has violated law, that person will be taken care of.

RUSH: So, Tom, what is the difference there? Where did he move the goal posts?

CALLER: Well, I’m talking about, I think it was on June 10th, the question I’m talking about. I don’t know if you guys have that one. But what I see is, okay, if he did something criminal, he should be in jail. If he just leaked the name and they can’t get the criminal, because I know this law is tough or whatever, he should be at least removed because exposing, you know, whatever they call them, a NOC, is unbelievable.

RUSH: She wasn’t a NOC. This is Twilight Zone again. She wasn’t a NOC. Her boss said she wasn’t a NOC. She was never in deep cover. Wait until you hear the story I’ve got today. This woman registered to vote. Well, she registered to vote under her covert name, under her agency name to vote for Gore! You could almost say she ‘outed’ herself. She went to register to vote using her cover name so she could vote for Al Gore. She wasn’t under cover. There has been no crime committed here if you look at the statute. You guys are using selective application of what you want to be true. You ask me, you call and say the president said something different yesterday than he said before. I play you the two bites. They sound the same to me. They sound identical to me — and then you say, ‘Well, I think if somebody leaks someone’s name, whether criminal or not, ought to be fired. If criminal, ought to be in jail.’ We don’t even know, depending on what the statute says and what the conviction would be, whether there is jail time for this or not. Now you guys want Rove to go to jail. You just want to criminalize somebody who beats you. The real crime for the left is anybody who beats you. Next thing you know you’re going to want me in jail, except you already do want me in jail. So, as of yet, that is not how the American judicial system works. Conservatism is not a crime. Beating liberals is not a crime. It is a badge of honor. But this whole notion of moving the goal posts, as you can hear from the question, starts with the reporter himself. 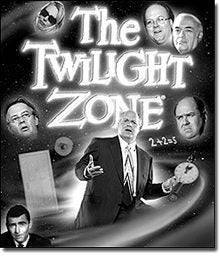 ‘Mr. President, you said you don’t want to talk about an ongoing investigation, so I would like to ask you regardless of whether a crime was committed, do you still intend to fire anyone found to be involved in the CIA leak case?’ The president never said he would fire somebody who simply leaked. It happens all the time. If you fired everybody in Washington who leaks, Colin Powell wouldn’t have been alive as Secretary of State for more than two days, folks. Can we be honest? Neither would his pal Richard Armitage. We wouldn’t have had a Secretary of State after two days if we fired everybody that leaked. We wouldn’t have half the Pentagon. We wouldn’t have half the state department. We wouldn’t have half the EPA if you put everybody in jail, or fired everybody, who leaked. Now you libs are barking up a tree here that you’re like a cat. You are going to get so high up it will take the fire department to get you out, except we control the fire department. We are not going to come get you. We are going to leave you up there and you’ll have to jump or spend the rest of your lives up this tree. I mean, the idea of saying the goal posts change because of this trick question, which is a lame trick question, ‘So, I would like to ask you, regardless of whether a crime was committed, you still intend to fire anybody?’ He never said he would fire somebody if a crime was not committed. He said if there is a leak out of my administration, I want to know who it is. If the person’s violated law, that law person will be taken care of. And yesterday he says, ‘If someone committed a crime, they’ll no longer work in my administration.’ How can it be any more consistent from September 30th of 2003 to yesterday? 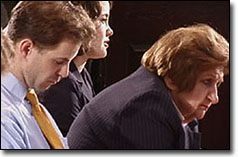 THOMAS: Two years and he can’t call Rove in to find out what the hell is going on? Why is it so difficult to find out the facts? It cost thousands, millions of dollars, two years, tied up how many lawyers? All he’s got to do is call him in.
McCLELLAN: You just heard from the president. He said he doesn’t know all of the facts. I don’t know all of the facts.
RUSH: Two things, Helen, if the president called Rove in, you wouldn’t be there. So Rove says what he says. The president comes out, “Hey, Rove just told me he didn’t do it.” Are you going to accept it, Helen? You know damn well you are not going to accept it. The second thing is, Helen, where was this question during the nine months that Bill Clinton was lying to this country about Monica Lewinsky? Why didn’t you just say, “Why doesn’t he just come out and tell us?” (doing impression) “But he did. He did.” Yes, Helen and he lied, and that is why you have these investigations with supposedly objective prosecutors who have no political interest in the outcome, just going and getting the facts because you know it as well as anybody, Helen, if Bush came out and said, “I just talked to Karl and Karl said he didn’t do it,” you would be all over him in double time.
END TRANSCRIPT