RUSH: Well, the Supreme Court nominee, Judge John Roberts, “submitted his Senate committee questionnaire response yesterday.” It’s about a hundred pages long. It was released by the judiciary committee late yesterday. It provides his responses to a broad array of questions, including his work histoire, political ties, and his views on judicial activism,” and this guy is brilliant. He said, “A sound judicial philosophy should reflect recognition of the fact that the judge operates within a system of rules developed over the years by other judges equally striving to live up to the judicial oath.” He said that judges “must be constantly aware that their role, while important, is limited. Judges do not have a commission to solve society’s problems as they see them, but simply to decide cases before them according to the rule of law.” Hope Yen is the AP reporter who put this story together, and the big news out of this report that he submitted, his responses to the questionnaire, the big news to the libs is, “Hey! Roberts says he’ll respect precedent!

He says it in there! He says he’ll respect precedent,” which means to the libs, “He won’t overturn Roe vs. Wade! He says right there! He says he won’t overturn Roe vs. Wade, do you see it?” That’s not what he’s saying, but that’s what they think he’s saying. That’s all that matters to them, and as Hope Yen writes in about the midpoint of her story: “Roberts’ views on the subject are considered critical to gauging his position on overturning the landmark Roe vs. Wade abortion decision, a stance supported by conservative members on the court.”

So that’s all that matters to them. Right in front of their faces is one of the most penetrating statements he could make about his judicial philosophy and they don’t even get it, apparently. “Judges do not have a commission to solve society’s problems as they see them but simply to decide cases before them according to the rule of law.” I’m going to tell you right now, Teddy Kennedy and Chuck Schumer and Leahy are going to zero in on that, because that’s exactly what they think judges are to do. Judges are specifically to solve society’s problems as they see them as liberals. Judges are to be liberal and they are to use courts to solve society’s problems according to the way liberals want them solved, and Roberts has just said, “That’s not what we do as judges.” So this is going to be interesting. His rolling them here, folks. He’s simply rolling them. While he at one point says that he’s all in favor of precedent and so forth and so on — by the way, he doesn’t say that precedent always stands, but the libs have just zeroed in on that.

So this is going to be fun to watch. I think, based on… I’ll just say it now — subject to change obviously; it’s early to say this — but I think what’s going to happen is that Judge Roberts really is going to run intellectual rings around these guys. I don’t even think it’s going to be a contest. I think that he’s been through this once before, confirmation hearings, been before this committee for his current position on the DC court of appeals. I just think he’s going to run rings around them, so much so that they’re not even going to know it, and they’re going to look like fools.

They’re going to keep penetrating; he’s going to have answers perfectly. We’ll just wait ’til the hearings start on September 6. I’ve got a great piece here, a columnist for the Pittsburgh Post-Gazette named Reg Henry has written a piece entitled, “This ‘Niceness’ of Roberts is Unnerving.” I pick up the column in progress. “Another problem in opposing Judge Roberts is that, from all reports, he is a genuinely nice guy, affable, cheerful, sunny and smart. Did I say he was nice? Whenever he goes for a walk in the park, puppy dogs strain their leashes wanting to rush up and nuzzle him. Of course, he walks in a shaft of sunlight, even on rainy days. Bluebirds seek to land on his head. Why, he’s so darn nice that bums in the park stop to give him money, so touched are they by his modesty and cheerful demeanor… I would humbly submit that we should take a closer look at his preternatural niceness. 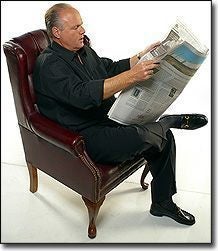 “They like to send me e-mails brimming with disgust and bile but delivered with a happy, sanctimonious air. This talent for vileness has led me to form the impression – perhaps erroneous – that to be a conservative is to be a bag of resentments held together by a feeble string.” Mr. Henry, are you blind? Do you not see the kind of hateful, spiteful, childish rhetoric coming out of members of your party, aimed at George W. Bush now for five years? Or at Tom DeLay, or at James Dobson, or at any of them? “If you look at many prominent right-wingers – Bill O’Reilly, Rush Limbaugh and Pennsylvania’s Sen. Rick Santorum – you will find folk who have raised snarling to a high art and seem to take pride in resembling the nether quarters of horses.” Did he just call me a horse’s ass? He did? I thought I was being rather nice in this column. I’m quoting him accurately. “Yet here we have this happy, nice fellow nominated for the Supreme Court. Go figure! Another thing that is mysterious is why Judge Roberts doesn’t have more of a record.

Say what you like about most conservatives, but they never shut up. Yes, I know, he hasn’t been on the bench very long, but that doesn’t explain it. Obviously, when he was a boy reading some book of moral instruction (when the rest of us were reading ‘Superman’ comics), he came across the proverb: ‘Still waters run deep.’ This ancient wisdom suggests to us the virtue of keeping our big traps shut. If you are a quiet idiot, people will think you are wise. If you are a quiet judge, the president will think you should be on the Supreme Court. Judge Roberts has kept nice and silent – and those concerned about the direction of the court should not tolerate behavior that raises such serious questions. If he gets on the court, he may bid all sorts of protections adieu in a very nice and polite way – not just for toads but for workers and women. As any gal will tell you, it’s the nice ones who break your heart.”

We’ve got problems here. This man has problems. I’ve never heard of him. This is the first time I’ve heard of him, the first time I’ve ever read anything that he’s written, so I can’t– (interruption) I don’t know how to snarl, Mr. Snerdley. That’s the whole thing, he said I snarl and I made snarling a high art. I’m on the Dittocam here a lot. Have you people ever seen me snarl? If I had to snarl, I wouldn’t know what to do. Now, I’m not making this up. I wouldn’t know what to do. How would I snarl? Put up a mean face or something like that? (Growling.) Or be like Howard Dean, Aaaaaagggggghhhhh!

I want to go back to Judge Roberts here for just a second, because this column I just read by Reg Henry referred to “toads,” and I had these two stories the last couple of days and didn’t get to them. One is from the AP. “Toad Case May Reveal Roberts’ Philosophy — appeals court vote may show inclination towards states’ rights,” and then there’s another story here. This is from the Raleigh News Observer, a headline: “Hapless Toads.” It’s an editorial: “Supreme Court nominee Judge Roberts’ legal views could spell trouble for protection of the nation’s rare animals and plants.” So we know what Reg Henry does. He reads his prescribed list of liberal publications and then goes and inserts little references to them. 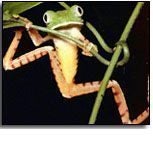 This AP story, “A toad may offer insights into John Roberts’ legal philosophy. The Supreme Court nominee voted against the toad in a 2003 case testing the powers of the federal government. The vote suggests that he may be inclined to support state or local interests on issues from civil rights to pollution control if confirmed to the high court.” So? So what? He ruled against a frog, folks, and the libs are going to try to hold that against him. Can I tell you people something about frogs and related animals? I woke up this morning, time to feed the cat. I’m walking in to where I feed the cat and you know what I noticed on the floor dead? A lizard — and I love little lizards. They’re my buddies; they eat insects, but my cat in the middle of the night found this lizard, it was history. What am I supposed to do, punish the cat? So now we’re going to punish a judge because he votes against a frog? The libs are desperate, and will grasp at anything to show this man is anti-government in his truth.