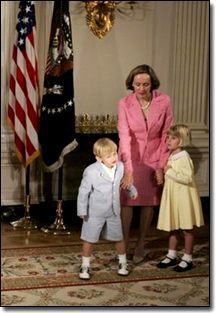 RUSH: One thing we haven’t learned yet, folks, is whether or not the New York Times will conduct an investigation into whether or not Jeanine Pirro’s children are adopted, and if they are adopted, how they were adopted. This is, of course, just part of the “standard background check” of Supreme Court nominees, we are told by the New York Times, just part of the background check that nominees must undergo. Speaking of it, the American Spectator today says that it was “opposition research” generated by NARAL, this abortion rights gang.”Their opposition research distributed to Democratic operatives working against Judge John Roberts that spurred these operatives to encourage reporters in Washington to look into the Roberts adoption process.” So we have here opposition research that was generated by a leftist special interest rag group talking to reporters, who then urged other reporters to look into the adoption of John Roberts’ two kids. It seems like we’ve established a link here — even though we’ve always known it’s existed.

You know, the rap is that all the conservative media responds to RNC-faxed talking points or messages from Rove or whatever, and we go out and we act in unison, when in fact that does not happen. The way it does happen is that somebody with a fax machine in the Democratic Party sends out talking points and the whole mainstream media echoes them and sounds identical!

It doesn’t matter what mainstream media newscast or newspaper you read; you read or hear the same thing. Now we learn that the opposition researchers at NARAL were able to get reporters at the New York Times looking into this abortion business — and that’s what it’s about, folks, make no mistake — via this adoption angle. “A Democratic lobbyist who is part of the Roberts fight speaking on condition of anonymity to the American Spectator, said they, NARAL, and other anti-Roberts groups, ‘went into this with a laundry list of things, and the idea that, given what was at stake, nothing was out of bounds.’

“That’s why you saw that ridiculous Roberts-is-gay thing spinning through the blogosphere, and why you had serious reporters looking at the adoption issue. Another Democratic operative said that NARAL officials ‘hit on the adoption issue because some of these NARAL and really aggressive pro-choice groups see political motivations behind everything. They see people who adopt children, beyond the desire for children, having an ideological predisposition against choice issues. It isn’t just about kids. It’s about politics.’

“The Democratic lobbyist says that the ‘very fact of the adoption issue reached so far as the New York Times shows how desperate Roberts’ opponents have become. ‘There’s a lot of Roberts writing but there isn’t anything much to hang our head on. He’s clean, and it’s frustrating our ability to paint him anything other than what the White House put forward: a smart, sharp and fair legal mind.'” Can I take you back, folks, to the early ’90s — late ’80s.

In fact, it might have been, the early days of this program — and I made the point to you that one of the things that I didn’t understand although I do now but one of the things I was having trouble comprehending about pro-choice groups back then was that they got mad when an abortion didn’t happen. hey literally got mad. I said, “This ought to illustrate to you just what this issue is to them. As many abortions as possible must happen.” I’m talking about the activists. I’m talking about the leaders.

These are the original feminazis, folks, if you want me to go back in time and define the term for you: every abortion possible must happen; every abortion that can happen that doesn’t happen is a set back for the cause — and it became crystal clear to me one day when I had a story in my formerly nicotine-stained fingers, about a Planned Parenthood abortion center that was just down the street from an adoption center. Some people from the adoption center parked themselves outside a Planned Parenthood office and tried to talk the women going in there into coming down and having the baby and giving it up for adoption, and the abortion people just went nuts!

They had a cow. The Planned Parenthood people, the NARAL people, they just went nuts, and I’m saying, “What is wrong with this? What’s wrong with having the baby and putting it up for adoption if you don’t want it?” Well, here we go. This is exactly what this whole business with Judge Roberts is all about. The fact that anything that could have happened to prevent an abortion did happen, and if you’ve seen some of the NARAL ads and some of the issues they’re having — what did they do recently?

They had a big powwow somewhere, and they are making fun of abstinence or something. I forget the title of it. A lot of people on the left, a lot of mainstream Democrats got a little frightened by it because it was too up front, it was too. It was too “here’s who we really are,” and so when you read here that “some of these NARAL and really aggressive pro-choice groups see political motivations behind everything, they see people who adopt children as having an ideological predisposition against choice,” and whenever you see “choice” in this, just read “abortion.”

“It isn’t just about kids; it’s about politics,” and so what they were hoping to do here was find out the record of his adoption or focus the attention on that with the intent being to illustrate the guy is “virulently anti-choice.” This is a one-note samba group. It’s a single-issue group but make no mistake. The best way to sum them up is: any abortion that doesn’t happen is a setback to their cause.

It is so patently obvious in this. This is pure paranoia. It was also going around — and I mentioned this on Friday when we had Fred Thompson on, who’s the liaison. Yeah, it was the “screw abstinence rally,” the screw abstinence rally. Now, most mainstream pro-choice groups — NARAL is not one — but most of these mainstream groups at least give lip service to the notion that there are other viable options here and we just can’t take away abortion, but this NARAL bunch?

I’m telling you, the more abortions that happen the better, they think. The more mainstream it becomes, the safer it is, the better it is for their cause and issue, and it’s just amazing how the Democratic Party has just stuck like glue to these people and does their bidding. It’s tough for some people to understand just how this is so political and what does it tie into, what other issue? Is it about freedom? What is it about? And there’s really no way to explain this rationally because NARAL is not rational, and these zealous pro-abort groups are not rational. They’re just angry.

They are miserable and they are unhappy, and they are desperately trying to find a way to be relevant, I suppose, but regardless: it is not mainstream. NARAL is not mainstream; they don’t represent even near a majority or even a plurality of American thinking, but they do have these activists on their side, and activist journalists such as the New York Times because this court is what it’s all about to them. The court is their legislature. The court is where laws are made. The court is where laws are torn apart, ripped to shreds, and where they are created. So we’ll wait patiently, and we’ll wait just to see if the New York Times does an investigation here into whether or not Jeanine Pirro’s children were adopted so that they can make her out to be a hypocrite when she claims to also be pro-choice.

RUSH: David in Fort Lee, New Jersey. Let’s grab a couple phone calls. I’m going to do something after that I seldom do. Welcome, sir, to the program.

CALLER: Rush, you’re — [seminar caller oath] — actually dittos. I’ve been a listener since August of ’88, since the lost moving truck days. I’m as conservative as they get [end oath] but you’re dead wrong on this. It may have to do with politics as to why the Times is going after him, but it really has nothing to do with politics. It’s… What you see here is an upstanding, affluent couple get perfect white babies when everybody else has to wait.

The reason the story is going to get buried and it’s never going to go anywhere is because liberals do it, too. This is the dirty secret in our country that nobody talks about, and it has nothing to do with his privacy, the privacy of the children or the children’s parents. In fact, what was going on was that he did something shady or he did something wrong. I mean, Rush, look at it this way. Does anybody who makes $250,000 a year give up their perfect white baby for adoption? No, they don’t. [sic]

It’s poor girls. It’s girls who aren’t — they don’t have a lot of money, and if by chance they’re taken advantage of by people such as Judge Roberts in the situation, I mean Judge Roberts could bury somebody like this if they ever came back. That’s why the records are immediately sealed. I mean… That’s why this is a story, that’s why it’s going to get squashed. Nobody is ever going to go after this.

RUSH: It’s not a story. It’s just a rumor. Look at all it took here. It is a rumor. I did not even say — I have never once said — it was fact. I’ve said, “One of the things floating around out there is that the Times wanted to look into this because a bunch of people have been complaining that he was able to get a couple of pure white little babies from Latin America,” and here you come, David. It’s stunning to me that this kind of thinking exists out there. You have just indicted Judge Roberts, and you don’t have the slightest bit of knowledge about his case.

You have just called this program and you have said almost with certitude, ontological certitude, that the reason his adoption files are sealed is because he went and put the screws to some poor kid, some poor mother down there, and if she ever comes forward and announces how she had the screws put to her by Judge Roberts, that he’ll bury her. So, folks, it proves it worked. This is the kind of stuff floating around out there, and this is the kind of stuff that if you bring it to a New York Times reporter they’ll go, “Oh, really?” and they’ll conduct and begin an investigation into it, with absolutely no evidence whatsoever, just supposition, just presumption, and now we know “it’s a dirty little secret; everybody does it, Democrats, Republicans, everybody. Nobody wants little babies of color. All they want is little white babies, and of course $250,000 couples don’t give up their little white babies for adoption.” It’s only poor little people of color. There’s so much prejudice and bigotry in this comment; I don’t know where to start separating it, but I appreciate your calling, David, and establishing this. This is a classic illustration of how this program works. Put it out there, and I know when you heard me say it last Friday, “Oh, Rush, come on, you know this…”