RUSH: We go to Whitney in Roanoke, Virginia. I’m glad you held on, Whitney. Thanks for your patience.
CALLER: Oh, thanks for having me.
RUSH: You bet.
CALLER: I had a rational and intelligent argument, but now I’m a little nervous. I’m not sure how I’m going — ha! ha! — to present it, but it seems like to me that you just dismiss the environmental concerns just right offhand, and what I’m trying to figure out is: Are you dismissing the harbingers of doom and gloom themselves, or the environmental concern?
RUSH: Uhhh. Am I just missing the harbingers of doom and gloom themselves?
CALLER: Yeah. Do you just not like to listen to them talk or do you just hate environmental policy? Is it possible to be an environmentally savvy conservative?
RUSH: Sure!
CALLER: Okay.
RUSH: Yeah. Yeah. But I don’t believe that there are any harbingers of doom and gloom in the environment out there.
CALLER: So you don’t believe in global warming? (scoffs)
RUSH: No.
CALLER: Or that the large ozone hole?
RUSH: No. Wait, wait, wait, wait. I —
CALLER: Or that humans created the ozone, destruction of the ozone.
RUSH: No. No, no, no. I don’t. Because the hole closes every year and we don’t do anything to close it.
CALLER: Eh, ha ha ha.
RUSH: So how are we causing it? It’s the same thing. 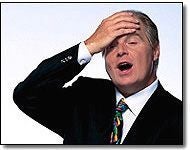 CALLER: Well, that whole vortex and, uh, you know, spinning earth sort of theory, and that’s maybe pseudoscientific?
RUSH: (sigh)
CALLER: I just want you to clarify your position on the environment. I mean, do you hate the environment? Ha ha.
RUSH: You know, I’m glad you called. I really am, and I would love to talk to you about this.
CALLER: Mmm-hmm.
RUSH: So we’re going to. No, I don’t “hate” the environment. I don’t hate anything.
CALLER: That’s right. You’re an optimist. Ha ha ha.
RUSH: I am of liberals.
CALLER: Right.

RUSH: I am totally skeptical of liberals. I am skeptical of any group of people who wants to say that we human beings in the advanced areas of existence, in the great democracies of the world are single-handedly responsible for destroying the environment, and if we don’t stop now, it’s all going to go away ? poof! I don’t buy that for a moment. I think the modern environmental movement is simply the latest refuge for communists and socialists who are opposed to capitalism.
CALLER: I think that’s where I’m confused, is the terminology. To me, “conservation” is not a liberal concept, and things like being conservative with your decisions about the environment —
RUSH: Well, that’s not —
CALLER: — is responsible.
RUSH: The thing you have to understand is the environmentalists are not concerned about the environment.
CALLER: Right.
RUSH: The environmentalists are using the environment as a platform to attack a way of life they disagree with.
CALLER: Right.
RUSH: And they’re working, and it’s succeeds with people like you, because after all, who wants dirty water?
CALLER: Right.
RUSH: Who wants dirty air?
CALLER: Right.
RUSH: And the environmentalists set up if you don’t disagree with them, oh you must be for pollution. I’m not for pollution. I just want the facts straight. There is more pollution in the underdeveloped world than in the United States. We clean up or messes better than anyone else does.
CALLER: That’s true.
RUSH: Well, then how at the same time with we be blamed for the destroying the planet and destroying the environment? We’re doing just the opposite! We’re going out of our way to protect it. We’re going out of our way to do what we can to hold great and responsible stewardship over it, but normal economic or environmental cycles? For example, go look at — if you can find it, go look at — a map of the way the earth looked hundreds of thousands of years ago and you’ll see the continents today don’t even exist as they do today.
CALLER: Oh, sure.
RUSH: Huh?
CALLER: Sure, but there’s seven billion — or six billion — more people. It seems like the cause and effect of that alone, without even the industry side of it, is going to have an environmental impact.
RUSH: Well, you know, Paul Ehrlich —
CALLER: Seven billion anything has an impact (giggles) I would think.
RUSH: (heavy sigh)
CALLER: I mean, isn’t it — I just wondering, is it responsible, or wise to err on the side of caution as far as the environment is concerned?
RUSH: Look it, we’re going to have a disconnect here, because you’re feeling about this —
CALLER: Yeah.
RUSH: — and I’m thinking about it.
CALLER: Right. Well, you’re right.
RUSH: And I don’t know how to get to your feelings. I don’t want to destroy your feelings here. I don’t own your feelings. They aren’t mine. I’m not responsible for your feelings, so I can’t talk you out of them.
CALLER: Right.
RUSH: But if you wanted to think about this rationally rather than feel about it — that’s the appeal of the environmental movement. They want you to feel like, “Oh, my God, we’re striking this great place!” I don’t believe we have the ability to destroy it.
CALLER: Right.
RUSH: Now, I’ve got to take a break. Are you interested in continuing this?
CALLER: Sure.
RUSH: Okay, well hang on through the break, and I’ll give it another stab. But you’ve got to let me answer the questions you ask me, okay?
BREAK TRANSCRIPT
RUSH: We go back to Whitney in Roanoke, Virginia. I trust you’re still there?

CALLER: Yes, sir.
RUSH: Okay, let me just say a couple of things here, because you asked me why am I dismissing all the environmental damage and why do I believe what I believe, and I want to try to explain it to you so that, as you keep listening, you’ll be able to put the comments that I make on all this into context and into perspective.
CALLER: Mmm-hmm. 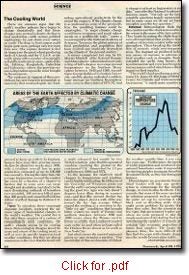 RUSH: Okay, well then why do you listen to what the environmentalists say?
CALLER: Well, again, Roanoke, Virginia, we live, it’s just streams and rivers and lakes everywhere.
RUSH: Yeah?
CALLER: I live near a paper plant.
RUSH: Yeah?
CALLER: It’s on the Jackson River, and if you want to fish, you’ve got to fish above the plant. If you fish below the plant, there are no fish.
RUSH: But there are fish if you go above it, right?
CALLER: Right.
RUSH: Okay so, the fish are smart enough to go where they can survive.
CALLER: That’s true. Wouldn’t you think there’s something about the plant that’s killing the fish?
RUSH: Uh, no.
CALLER: No, really?
RUSH: No. Are they finding a bunch of dead fish floating in the river?
CALLER: No, they just don’t live there. They’ve moved away. Well, there’s carp. You’re not going to eat that.
RUSH: (sigh)
CALLER: I guess you could.
RUSH: If there’s rampant fish dead — I keep hearing this — I want to see the bodies. I do!
CALLER: (laughs)

RUSH: I do. Look it. I’m just telling you: I don’t believe liberals, Whitney, and you shouldn’t, either, whether they’re talking about the economy, whether they’re talking about abortion, or they’re talking about Judge Roberts or they’re talking about the environment, because it’s all aimed as advancing a liberal agenda, which is largely an anti-capitalist agenda, a big-government agenda, and they want people to be as concerned about it as they can be because you’ll give up some of your freedoms in order to protect the environment. When you give up your freedoms, government gets the freedoms that you had.
CALLER: But these companies that invent things to clean up the environment. I mean, that’s a capitalist endeavor. I’m sure they make a fortune, making, you know…
RUSH: So? So?
CALLER: Yeah.
RUSH: So what’s wrong with that? They’re cleaning it up.
CALLER: That’s great. I don’t see how it’s anti-capitalism if a new company comes along with a new idea and makes a load of money off of it.
RUSH: Well because listen to what they say is the reason. They’re blaming the United States for all this pollution!
CALLER: Right.
RUSH: Look at the Kyoto protocol. China is the bigger polluter than the US could ever hope to be. They’re exempt from the Kyoto protocol.
CALLER: Which is ridiculous.
RUSH: Well, of course. The Kyoto protocol is nothing more than the world’s attempts to get its hands into our back pocket —
CALLER: Right. And I agree with that totally.
RUSH: — and to force us to be less competitive and less advanced economically so as to level the playing field. We are the world’s superpower. They’re coming after us every which way they can, wanting our money with their hands in our back pacts or what have you. Look, I don’t want to get sidetracked here. Let me give you my fundamental reason for this. Politics aside.

CALLER: Well, then how does the public who wishes to be informed, like myself, on environmental facts, which scientists do I listen to and which do I dismiss?
RUSH: Common sense. Common sense! Of course you can (sigh). Look, this will go on forever.
CALLER: I know, sorry.
RUSH: No, but you could certainly engage in some destructive things, but do you destroy the ability of man to survive? No. But I mean there’s damage done to the planet… To use this kind of thinking that is seductive, we should never have built the first house in this country because something got destroyed to do it, something necessary to prolong life.
CALLER: Right.
RUSH: They didn’t want us cutting down trees now. Of course beautiful things happen when you do cut them down. You get baseball bats, you get houses, all kinds of things — and trees are a renewable resource. Common sense much the common sense, and don’t forget that the people who try to make you feel guilty are a bunch of liberals and if you keep that in mind you’ll have a healthy skepticism about what they say.
CALLER: That’s what I wanted. That’s why I called, for you to elucidate this subject for me. I feel better informed now.
RUSH: I’m happy to have helped. I’m a little long in this segment, folks. I deeply apologize, but I as host considered it to be worthwhile.
END TRANSCRIPT