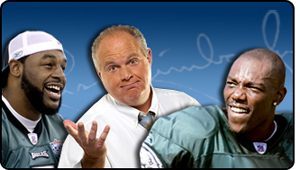 Meanwhile, the latest development is that Donovan McNabb has told T.O. to stop talking about him. The leader of the Philadelphia Eagles, the quarterback, Donovan McNabb, says, ‘I’m not troubled by what T.O. is doing, but I don’t want to hear him mention my name. If anybody is going to talk about me, it’s going to be me.’ This rift cannot be allowed to continue, ladies and gentlemen. It just can’t, and I would like to offer this program as a means of getting these two Americans and star players back together. They may not want to talk to each other face-to-face, but perhaps they would join me on this program and speak to each other telephonically via this program and settle this. It’s silly. They’re adults. They’re being paid millions of dollars to play, basically, a game. I know it’s a high-risk game injury-wise, but the length of time they have to make big money and play this game is limited because it’s athletics. They’re squandering opportunities. They came very close to the Super Bowl last year, and I know Owens has a problem with McNabb about that, he ‘got tired’ at the end, but I think it was a very unfair comment — and these two people need to get back together, and I would like to facilitate that if possible. If Donovan McNabb and Owens would like to appear on the program — not in studio, but telephonically, Owens from his basketball court in New Jersey and McNabb from the Eagles training camp or wherever he wants to call from — I would be more than happy to broker this and put these two guys back together, for the sake of the Eagles, for the sake of the NFC East, and for the sake of the National Football League. I mean, it doesn’t need this kind of stuff, with us being on the verge of the National Football League season. I just wanted to put it out there; let everybody know that I’ve made the offer, and it is a beautiful thing, and I’m standing by. I’m ready.

You know, it’s a tough thing to get on this program. We don’t have guests. I seldom invite people on this program. You know, when the guests appear on this program it’s because they’ve called and groveled and said they’ve got a book or a movie or they’ve got some issue they want to talk about, but seldom do we have them. I mean, I think this year alone we’ve asked one person to come on the program — well, two, Bernard Goldberg and Rick Santorum, and then that’s it. So this is a rare opportunity that’s being offered here. I see Mr. Snerdley is laughing in there. I’m deadly serious about this. This is childish. It’s ridiculous to see all this going on. The people of Philadelphia, you ought to see. I’ve been reading the papers. People have turned against T.O. They don’t like T.O. This is not good for the Eagles. Yeah, they’re really down on T.O. ‘T.O., go home,’ or whatever they’re saying — and he already is at home! So I just wanted to make the offer and let everybody know I’m serious about it, and this program is available any time Donovan McNabb and Terrell Owens would like to avail themselves the opportunity for an impartial arbitrator to sit here and put these two guys back together — at least sufficiently so that they could perform at peak level during the season. (interruption) Yeah, T.O. did say that Andy Reid told him to ‘shut up,’ and that his name is Owens, and nobody tells him to shut up. I’m not trying to broker anything here between T.O. and Andy Reid. Andy Reid is the coach of the team. He’s in effect the boss of the team. You know, that’s for T.O. and Andy Reid to work out. I would not intrude on that relationship. I mean these two guys, the same thing: they’re players. They’re both players. I know Donovan is a quarterback, the leader of the team, but this is not good for Eagles fans. We care about Eagles fans. We Philadelphia on this program. I’ve been to Philadelphia for some of the most memorable moments in my life, so I owe the city — and I’m serious. If somebody wants to spread the word, I’ll sit here eagerly awaiting some sign that the two warring factions here are willing to avail themselves of this really unique and not-very-often offered opportunity.

RUSH: Tacoma, Washington, we’ll start with Larry. Nice to have you on the program, sir. Hello.
CALLER: Hey, Rush, nice talking to you.
RUSH: Thank you.
CALLER: Hey, I think your love for football’s gotten in the way of your common sense of fair play and ethics. You know, in my opinion, T.O. is just nothing but a punk. He’s one step below an average NBA player for common sense and good class. He’s — you know, Donovan McNabb, on the other hand, is a classy guy. He took your comments on ESPN in the context that you portrayed them in, not the way the liberal media tried to portray it. They basically gave you the Jimmy “The Greek” job on that deal. So, you know, he doesn’t understand the word “contract”? What is a contract? That’s a binding agreement between two people, and he wants to renegotiate his contract. I’d like to see him pay back half his money if he didn’t have a good season. I think Minnesota [sic] did the right thing by getting rid of him. He’s a clown. He should be out of the sport. He’s a great athlete, but he’s a clown. He’s a punk — 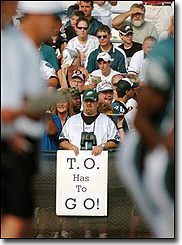 RUSH: Hang on here! Two things. I want to address the NFL contract situation, and I also want to address your reference to T.O. as a “punk.” T.O. is a child of God. He’s a human being. He obviously — I think people on the left would say he’s engaging in “a desperate cry for help.” I am here to offer and to assist. I can. I could bring these two guys together. I’ve been there, folks, and I could do this, and I’m serious in my desire to do it. As to NFL contracts, the players have a point. Folks, don’t think this is sports discussion. This is an employment issue here and this is going to be an economics lesson for you. So, please, for those of you who hate sports, try to still listen to this and don’t tune this out. The National Football League is one of the most well-run and well-structured business models that has franchises in the history of this country, and they have managed to have peace up ’til now with the players union since 1983 — and it was the last work stoppage they had, 1982 or ’83, strikes, maybe it was ’81, but early 80s, and the way they’ve done it, they were wrong about one thing. They thought free agency and players traveling from team to team would tear down the cohesion of teams and loyalty to fans, and it has done just the opposite. But in the process, free agency has also created a disparity of pay within a team. It is impossible to understand this, to accept this. I have heard this from four different NFL owners: it is impossible to lose money in the National Football League, primarily because of the amount each team gets from television, radio and other marketing venues. It’s impossible to lose money in the National Football League.

There is a salary cap. Now, in Terrell Owens’ case, I’m not going to get the specifics exactly right but, yeah, he signed a contract last year, and I understand totally everybody saying, “Live up to it, T.O. Live up to it,” but if you look at the average NFL contract, next time you hear that an NFL player signed for seven years and $49 million, don’t believe a word of it, because that $49 million isn’t guaranteed. What you may have of the $49 million, in T.O.’s case, maybe six million of it’s guaranteed or maybe nine million, but he can be cut any time. He will get the bonuses he’s due for signing. The way they give you guaranteed money in the NFL is to give you a signing bonus or a roster bonus for showing up at a certain time, and they prorate that bonus over the length of your contract to apply it to the salary cap. So where Owens may get, oh, a $49 million contract, his yearly salary may be just over a million dollars, but he’s got the bonus money up front — and this does not happen in baseball. Baseball money is guaranteed. You get injured, you get the money, and the NFL players are trying to say, “Wait a minute. All these big contracts, 49 million here, 60 million there, it’s BS. It isn’t true. We’re not getting that money. We’re getting cut in the second year of a seven-year deal. We don’t get any, other than the bonus money that we’ve been given,” and they want to try to change that around and they’re trying to arrange so they get more guaranteed money in the deals that they get, and the reason they don’t is because of the way the NFL has successfully structured itself and this is going to be one of the sticking points when the players association tries to put together a new deal which they’re trying to do at present with the NFL.
Now, I understand the players’ side of this in terms of, okay, the teams agreeing to pay them $49 million but they’re not. There is no way, for example, that Terrell Owens will fulfill that contract with the Eagles if he’s the best player in the history of the game and the history of the human race, because at some point he’s going to get so old, those contracts are so back loaded that to keep him on the roster for the sixth or seventh year of his contract could cost the team a 10 or $11 million bonus when he’s 35 or 36 years old. No 35- or 36- or 38-year-old is going to get a ten-million-dollar roster bonus in the National Football League. You’re approaching Social Security at that age in the NFL — and this is really T.O.’s agent. Drew Rosenhaus is one of the agents that’s trying to take the lead and get the whole structuring of NFL contracts changed. I think T.O. is going about it all the wrong way. He did sign the deal just one year ago. This is not the time to come back and do this, but just in the sense that the players have a point here. The league does announce these terms, announce all these huge mega deals, but those players never see half of that money. They don’t see half of it, because it’s all toward the end. The salaries get up so high in the end, you know, look at a third-round draft choice traditionally will sign for a $600,000 bonus and get the minimum salary for the first three years of his deal. Second round is a little bit better. The first round, of course, is the cream of the crop, but few others. You go to work for someplace, and if you have a contract, they agree to pay you X for X-number of years, you’re going to get it — unless you quit. But if you stay there and work, you’re going to get it. In the NFL they’re structured in such a way you can’t stay there long enough to earn it.
END TRANSCRIPT