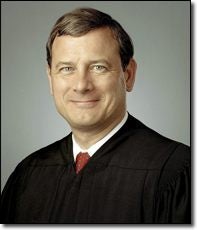 RUSH: I mentioned in the last hour that the left is just today on Judge John Roberts. Virtually every fringe lib group that you’ve heard of (and some that you haven’t heard of) are issuing press releases and faxes and the American media is bending over forwards and backwards to give them the credibility that of them have earned and deserve. Making them all sound bigger and more powerful and relevant than they are. Before we get to details of that, there’s this today from the Los Angeles Times: “On High Court Vote, Centrist Democrats Caught in Middle.” Anybody tell me, Mr. Snerdley, what’s wrong with that headline? “On High Court Vote, Centrist Democrats Caught in Middle.” That’s exactly right. What “centrist” Democrat? Somebody name for me a centrist Democrat — and if you are a centrist, don’t you want to be in the middle? How in the world is it a bad thing if centrist Democrats are caught in the middle? Already we have found the major flaws in this story. The headline makes no sense. “Centrist Democrats Caught in the Middle.” Where else would you expect to find a centrist — if you can find one in the Democratic Party? It’s one of the biggest myths around. They’re all liberals! They all march in lockstep! They don’t deviate. There are no Hagels. There are no Susan Collinses. There are no Olympia Snowes. There are no McCains. There aren’t any Democrats that bolt from the leadership and go out as “mavericks.” You ever heard a Democrat called a maverick? They don’t bolt the leadership, head for the TV cameras and say things at odds and at variance with their leadership. What is this centrist Democrat BS? The story written by Maura Reynolds:
“The outcome appears all but certain, but the nomination of John G. Roberts Jr. to the Supreme Court is still likely to be a nail-biter for the Senate’s centrist Democrats. On the one hand, they would like to reward President Bush for consulting with them in advance and picking a nominee who appears legally better qualified and ideologically more temperate than many had expected.” You know the dripping superior attitude in this You know, I get so sick and tired of a bunch of people who are on the fringe talking about somebody not being in the American mainstream. They wouldn’t know the American mainstream if they found themselves in the middle of the Mississippi River — and this sentence: “[T]hey would like to reward President Bush for consulting with them in advance and picking a nominee who appears legally better qualified and ideologically more temperate than many had expected.” Yeah, we thought we were going to get some Nazi-like wacko that wanted to send women back to the caves. Who are you people? What gives you the right to assume you represent the majority of thinking? You don’t even win elections anymore! You’re losing elections by ever larger margins. Your party is fracturing with this kook bunch anti-war crowd down there that should be embarrassing all of you and should be scaring the daylights out of you, in terms of your political fortunes and the reputation of your party at large. You know, isn’t it interesting, when Bill Clinton nominates a hard left ACLU lawyer like Ruth Ginsburg, we never hear about having to “examine this person’s views,” and having to “make sure that they’re in the mainstream of America.” We don’t do anything! We don’t have groups that come up. We don’t do anything like this when Clinton or the Democrats nominated judge.
When a Republican nominates a judge, “Why, we’ve got to start examining whether that judge is human! Does that judge even breathe air? Does that judge breathe oxygen?” The double standard here is striking, and it’s this arrogance and this superior attitude. I’m telling you, it grates on me. It just grates on me. The headline here bugs me, and the opening two sentences bug me. The third sentence or third paragraph of this piece is, “On the other hand, more than Roberts’ fate hangs in this balance. For many Senate Democrats the debate over Roberts is increasingly a battle over the nature and the direction of the court and the president’s efforts to narrow or overturn some of its controversial…” Yeah. How come we only hear about “drastic changes to the court” when a Republican nominates a judge, but we never, hear about drastic changes in direction of the court when an ACLU lawyer like Ruth Bader Ginsburg, a screaming leftist, is nominated? We never hear about that. Now, this is the next joke in this piece. “One of those [centrists] caught in the middle is California’s Dianne Feinstein, the only woman on the Senate Judiciary Committee. In a speech Wednesday to the Los Angeles County Bar Association, she said that her vote would take into account concerns about the direction of the court.” Well, now, see this is a big myth, too. They pump out Senator Feinstein as a “centrist” to create a reputation and an image for her but she’s just as liberal as any of these other people are. She’s as liberal. I mean, the idea that Dianne Feinstein from San Francisco is somehow a centrist? That’s like saying Barbara Boxer is a centrist! Take a look at the votes; forget what they say. Yeah, they do have some people that go out there and speak moderately but take a look at the votes.

“Many Senate Democrats, especially those known as liberals, are expected to vote against Roberts to go on record against his political conservatism.” Especially those known as liberals…? Many say that Democrats…? Why do you need the modifier, “especially those known as liberals”? “Many Senate Democrats… Many Senate liberals… I mean, Democrat, liberal, it’s the same thing! “In her speech Feinstein emphasized the historic nature of the decision to confirm a Supreme Court justice who enjoys lifetime tenure.” You all know it’s all about abortion. All right, now, get this. This is the Washington Times today: “Liberals Expand Scope of Attack on Roberts — Liberals have broadened their attack on federal Judge John G. Roberts Jr. beyond just his position on abortion to include accusations of a more general hostility toward women and privacy…. More alarming to [Ralph Neas, People for the American Way] is that Judge Roberts’ views ‘are sharply at odds with those of the justice he has been nominated to succeed, Sandra Day O’Connor.’ Broadly speaking, liberals say Judge Roberts wants to limit ‘reproductive freedom’ for women, undo women’s ‘right to privacy’ and discard remedies aimed at ‘gender equity,’ Neas said at the National Press Club,” and this, of course, carries forth another fallacy, which is the court has to be “balanced,” that even if you are a Republican president and a liberal judge retires, you’ve got to put a liberal judge on the court to keep the balance.
How come when a liberal president, a Democrat president, appoints judges to the court, nobody ever says, “You’ve got to maintain the balance”? Democrat presidents are always allowed, and in fact required, to the balance. Democrat presidents are to make the court more leftist; they’re supposed to turn it left. Republican presidents supposed to maintain that leftist balance so that the liberals who cannot win elections to save their lives still get to control the court. The more I think about this, the more I think about it — and I’ve been thinking about it a lot — it just infuriates me, the arrogance and the condescension and the of a bunch of losers. Talk about imposing a way of life on people! Are you sick and tired like I am of having liberalism imposed on you everywhere you go, be it whatever name you give your college team, to what you can wherever you go, to