RUSH: better illustrates the moral and intellectual bankruptcy of the left than their reaction to this disaster in the Gulf Coast region. The thing they can do is finger point, blame President Bush, rather than directing their concerns and energies constructively toward solving the problem. Instead of being part of the solution, they compound the problem by politicizing everything about this. “Bush didn’t adequately prepare for this by getting assets into place, and he isn’t doing enough to rescue the people already there.” This

is all a “gotcha” exercise rather than a genuine fact-finding exercise. The left cannot help themselves. All they know how to do is to hate, hate, hate George W. Bush. They have solutions. When you look at the people in New Orleans conducting the rescues, do you see any environmentalists? Do you see any elite leftists? Do you see any of the people who are out there raising all these concerns? Nope. You don’t see them there. You see the men and women who make this country work, and I see American flags on some of these rooftops in New Orleans. I see people of all races. I see people of all sexes getting together, doing the best they can in circumstances that we can only try to relate to via watching it all on television. It is more devastating than we can possibly imagine, and efforts are being made. The New York Times today has an editorial. You may as well, as far as the New York Times is concerned, think that history began with the George Bush presidency. The headline of this editorial is: “Waiting for a Leader,” and this editorial is (one, two, three, four) five paragraphs as printed out from their website, and it blames Bush for virtually everything. The war on terror and Iraq, 9/11 — you name it — this disaster in the Gulf region.
They start by saying he “gave one of the worst speeches of his life yesterday, especially given the level of national distress and the need for words of consolation and wisdom. In what seems to be a ritual in this administration, the president appeared a day later than he was needed. He then read an address of a quality more appropriate for an Arbor Day celebration: a long laundry list of pounds of ice, generators and blankets delivered to the stricken Gulf Coast. He advised the public that anybody who wanted to help should send cash, grinned, and promised that everything would work out in the end.” This is not good enough for the New York Times. They want a quivering lower lip, and they want a bunch of emotion expressed. They want empathy, sympathy, which is not going to accomplish anything. What we got from President Bush yesterday was the button-down business executive approach to a problem: That’s not good enough for the people on the left. The lower lip didn’t quiver. He didn’t break out in tears. He didn’t empathize. He didn’t see seem to have any compassion about any of this. “Well, of course,” of course, of course, the Times says, “endure, and the city of New Orleans must come back. But looking at the pictures on television yesterday of a place abandoned to the forces of flood, fire and looting, it was hard not to wonder exactly how that is going to come to pass.”
It might be interesting to pose a little question to those of you armchair quarterbacks. Let me ask whoever is writing these editorials at the New York Times. This happens, you put in your editorial what you would do. You’ve got three days to set up a rescue operation system that saves everybody. You’ve got three days to eliminate all the crime and looting that, by the way, has been permitted to go on down there for I don’t know how many decades because law and order has become a code phrase for racism. So you can’t talk about law and order. You think this is a new thing with these people running around down there with guns? You think gang activity in cities is a new thing? People are acting shocked and stunned that it would happen in this circumstance. What do you expect? I mean all elements of our society are on display. Have you heard about what the inside of the Superdome looks like? We’re dealing with a microcosm here. It is what it is. People are who they are. Just because there’s a disaster doesn’t mean that everybody is going to become angelic. There are going to be people that try to take advantage. You’ve seen the numbers, 80% of New Orleans under water, and it’s been that way for three days, and you’re probably wondering, “Well, how come 85% isn’t under water by now? We keep hearing levees haven’t been plugged up. How come it’s not 85 or 90%?” Because there are two sides to the levees. There’s a canal. There’s the west side and the east side of the canal, but only one side breached. The other side of one of the canals is the city of Metairie, and it’s dry, and they’re being told to leave. They’re being told to get out of there. 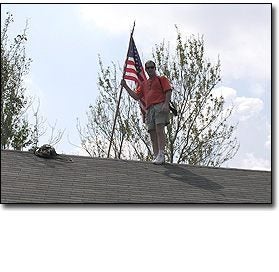 They know full well that if they leave, the looters and the gangs are going to be able to get across the levee and steal whatever is in their houses. What do you expect them to do? So you’re running the show, New York Times. What are you going to do about this? Nobody is taking any action against the looters because the fear of political correctness. I will guarantee you it’s the fear of political correctness. In one instance people are saying, “Weeeell, you know, these gangs have AK-47s. They broke into these gun stores and they’ve got AK-47s.” Well, some of them probably did, but a lot of them don’t have to break into gun stores to get guns. That’s part of the requirement to get into a gang. That was followed by the cops. The cops went into the gun stores, but you know what they did? They took the ammo so that the looters won’t be able to go back and get the ammo and reload. They’re , and now the cops are being complained about, and accused of looting as well. There may be isolated incidents of it. But don’t say the cops are looting when they’re going in there and taking the ammo from a gun store that’s already been broken into and guns already stolen from and guns worthless without the ammo so they’re going in and doing what they can to get the ammo out of the reach of the looters. They are doing what they can do — and to somehow make all of this the fault of Washington, all of this the fault of the Bush administration. It’s like nothing ever happened in this country before Bush became president, like there was no crime. There wasn’t any crime in New Orleans before Bush became president.
There was no terrorism, either, do you know that? before Bush became president, and there wasn’t an energy problem before Bush became president, and there weren’t rising gas prices before Bush became president. It’s amazing! If you read the New York Times, the country only began on January 21st, 2001. Prior to that, we were some nice little hunky-dory utopia. But now all of a sudden we’ve got a country that’s going downhill fast, and at all happened starting in January of 2001 — and, of course Howard Dean got in on the act today. The Democrat National Committee has issued the following press release. “This morning, President Bush told Diane Sawyer on ABC’s Good Morning America that to ease skyrocketing gas prices, Americans ought to conserve more, ‘and I would hope Americans conserve if given the chance,’ quote, unquote, Bush. Howard Dean writes, Democratic National Committee chairman Howard Dean, issued the following statement reminding President Bush that ‘in case he hadn’t noticed, ordinary Americans have been doing their part. They have been making sacrifices. They have been suffering.'” Yeah, Democrats look out across the land, that’s all they ever see, is suffering. “Meanwhile, President Bush has failed to rein in skyrocketing gas prices. Now in the wake of Hurricane Katrina, as Americans pulled together to do their part and gas prices again explode, Chairman Dean suggested that perhaps it’s time for President Bush to finally use whatever influence he may have to call on his friends and campaign contributors in the oil and gas industry to bear their fair share of the burden.” Last I saw, a whole bunch of rigs and refineries were rendered impotent by this storm. How much more harm and damage do you want to happen to them?

And, by the way, You see where it gets us. Folks, it’s not sane. There’s no other way to describe this. Fossil fuels, it may as well be a poison, it may as well be a cancer, an incurable cancer. It’s a disease that consuming us all, fossil fuels and oil. it’s the fuel of the engine of freedom and democracy. It’s the fuel that keeps us growing and going — and without it, we don’t grow and without enough of it, we don’t even go — and the Democrats seem happy about this! Once again whining, moaning, complaining, offering no solution. Well, they have offered solutions, but they would only compound the problem. Bill Nelson says (summarizing): “I’m not going to let them drill anywhere. I’m not going to let them drill in Florida; ain’t no way, man! Not on my watch. I’ll filibuster, whatever I have to do. We need to freeze gas prices.”
Yeah, that will really make the situation even worse. And then Hillary Clinton: We need congressional hearings on gouging — and, of course, Howard Dean picks up on that. He wants the president to call on his friends in Big Oil to join in the sacrifice and stop gouging American families at the bass pump. Supply and demand. How many times do we have to say it? Supply is down! Take 30 million gallons of gasoline off the market in a day for every day for as long as this last, what do you think is going to happen to the price? At any rate, it is this unceasing, ongoing, almost like enemy opposition to the oil industry, that I hope all of you notice, particularly now when you are finding shortages and high prices — and if you listen to people like Howard Dean and his cronies in his party and the environmental left, you’ll have even less of it and you’ll have even higher prices — and now hybrid or no newfangled new technology is going to bail you out because we’re nowhere near it.
END TRANSCRIPT