RUSH: Mrs. Clinton released a statement. She flew to Houston yesterday. She flew down to Houston; she turned right back, goes back to Washington then introduces this: “Clinton unveils legislation to restore FEMA to independent cabinet level status and launch Katrina commission to investigate hurricane recovery efforts. On the heels of her visit with victims of Hurricane Katrina in Houston yesterday, Senator Hillary Rodham is introducing legislation to restore FEMA to cabinet-level independent federal agency status to ensure that it has the authority it needs to effectively manage recovery efforts.” So what are they saying, they’re saying two things here. Mrs. Clinton is saying FEMA is no good because it’s part of homeland security. Homeland security is no good because FEMA is part of homeland security. We’ve got to get FEMA back out of homeland security. Well, who the hell’s idea was homeland security? Joe Lieberman’s. Joe Lieberman and the Democrats advanced the notion that we need a homeland security department. Bush originally opposed it. He didn’t want to grow the bureaucracy, but he “reached out,” Dan Balz. He “reached out.” He attempted to be “bipartisan.” So we created this massive new bureaucracy — which I opposed, and I want to go on record again as reminding you. Homeland security, we put FEMA in it. Now, turns out that Mrs. Clinton voted for all of this. Mrs. Clinton voted for all of this. So maybe we need to ask Mrs. Clinton, “Are you now admitting a mistake?” See, what these people in Congress want to get away with, folks — and I’ll tell you something that really bothers me about this. You got a disaster here, right, and so we’re pointing fingers at the mayor and we’re pointing fingers at a governor down there and a lot of people are pointing fingers at President Bush. But guess who gets to participate here as innocent bystanders? The United States Congress, the House and the Senate. 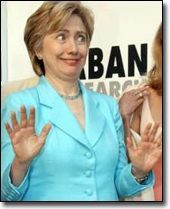 Why, they had nothing to do with this! No, they only allocate the money. They only write the laws in this country. That’s all they do, and yet they then get to sit around as innocent bystanders as though they had no role whatsoever, and they get to conduct hearings where they get to examine everybody else’s actions and then seek out the people they want to destroy, all the while with immunity, with practical immunity, as though they had nothing to do with any of this. They’re the ones that set this up! If FEMA, being part of homeland security, is a boondoggle and failure, let’s go to the people whose idea it was, and let’s maybe conduct hearings and ask them some questions. It’s just mind-boggling to me. But this is really a bold move, isn’t it? We’re going to move FEMA and we’re going to change the director. Wow! Wow, that’s really going to make a huge difference. We’re not going to get rid of FEMA. We’re just going to pull it out of where it is — a really bold move, Mrs. Clinton. I’ve got a good idea. Why don’t we do this: the Louisiana state legislature ought to remove the governor and maybe take over the city! That might actually be a good start. This is a local problem down there. Of course it’s not mentioned at all, you can’t do that, and the reason you can’t do that is because you’re going to blame it on FEMA. FEMA sucks. FEMA sucks and FEMA rules at the same time. So we’re going to focus here totally on FEMA. This is what the liberal Democrats do: they go to what appears the weakest point in the chain, exploit it and blame it on whoever all the while exempting their own role in setting it up this very way. Why shouldn’t heads in Congress roll, too?
If heads are going to roll here, we’ve had some pretty dumb moves by Congress’ own admission, but FEMA in homeland security, creating homeland security is a dumb move. Who did it? Who writes the legislation? They set up this system. No one seems to understand their role in this. Somehow it all gets blamed on executives: the governors or mayors or presidents, or heads of these departments. But somehow these members of Congress get total exemption from this. You know, 9/11 happens. They create the homeland security department. Katrina hits and they want to deconstruct it. Stop and think of what’s happening. Put it in a timeline. We have 9/11. “We need a Department of Homeland Security,” say the liberal Democrats. Bush goes along with it. “Yep, we need a homeland security department and we’re going to put FEMA in it.” The Democrats were all in favor of this, leading the charge. Now Katrina happened. “We need to take FEMA out of homeland security. It’s just not working!” Well, whose idea was it? I’m sorry to sound so energized here, folks, but why is it these people get a pass? The Coast Guard’s done a great job down there. They’re part of the department. We focus on one guy, Mike Brown, that nobody thinks is doing a good job and so he’s the weakest link in the chain, bammo! We head in there and in the process we ignore all the things that are working because we want to make the point that nothing is working because Bush is in charge of it all, and that’s not playing in Peoria or anywhere else. Thanks for the bold move, Mrs. Clinton, pretending you had no role in setting up these bureaucracies, and you had no role in setting up and making these spending priorities, act like the homeland security department just popped out from thin air, when they’re the ones that set it up. They act like moving around the pieces of bureaucracy is some kind of a bold move. I don’t want to hear from them right now. Their posturing is sickening to me.
BREAK TRANSCRIPT
RUSH: Get this. We have audio coming up from Mrs. Clinton. She says, (paraphrasing) “I called for an independent commission, Miles, I don’t think the government should be investigating itself.” Uh… made up of who? Former government people? Independent commission, my backside. At any rate, ladies and gentlemen, Rush on Broadway. I’m sorry, some days it’s tougher than others to stomach this.
END TRANSCRIPT