Kanye West Is Just Fine with the NFL

RUSH: Here’s Scott in Raleigh, North Carolina. You’re next, sir. Hello.
CALLER: Hello, Rush. I find it interesting that ABC, the same network that you had such trouble with by making some comments about a particular quarterback is the same network that is allowing Kanye West to come and be a part of their NFL kickoff thing Thursday night, and he totally, I mean, I think has pretty much slandered the president of the United States and, hey, he’s still welcome to come! Whereas you make a comment that wasn’t nearly as off base or totally wacko, and you get all that heat. I see why you cut out of the TV business, Rush. 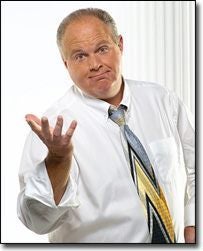 RUSH: (Laughing.) You know, I must confess to having the same thought. Kanye West, I saw what he said on NBC Friday night. “Bush doesn’t care about black people dying,” or whatever it was. NBC cut that out of the West Coast feed. They cut it out of the West Coast feed. I’m kind of glad that they did. If that had aired live in certain parts of the West Coast who knows what it might have sparked out there. So they cut it out, but Kanye West has this image of cleaning up rap. Doesn’t he, Mr. Snerdley? I’ve heard that Kanye West is one of these Mr. Clean guys. He’s going in and he’s getting all over the rappers for being anti-gay and anti-female and basically what they’re doing — and yet he goes on this NBC telethon fund-raiser, and the thing that nobody knows about: How much money did the guy cost them? He’s up there saying all these vile things about George W. Bush; how many people said, “To hell with this show,” and turned it off and don’t contribute any money?
Then after that, MTV and Black Entertainment Television announce that they’ve hired Kanye West for more telethons this weekend, and they’re going to give him even time to speak. Then we learn that he was invited to be on the NFL’s big kickoff show Thursday night at eight o’clock. You know, the NFL season starts tomorrow night, the New England Patriots hosting the Oakland Raiders and Kanye West and the Rolling Stones are doing this big music blowout thing for an hour before the game starts, and the NFL made a point: (banging desk) “Kanye West is our guy! Kanye West is Kanye West will be part of the pregame show on Thursday night.” I must confess (laughing) I did flashback to that ESPN incident, and I said, “Hmm, Kanye West, NFL okay. Rush Limbaugh, NFL, .” It’s just what it is. But your observations about the television business are pretty poignant, Scott, and I appreciate your call.
END TRANSCRIPT