RUSH: You got to hear this, because you don’t hear this. You’re going to hear something you don’t hear. This happened while this program was on yesterday, on CNN. Nancy Pelosi, all set for what she thought was a softball interview with Kyra Phillips on CNN. But it was anything but softball. Kyra Phillips’ first question: “I want to ask you, as you stand here and continue to criticize the administration and criticize the director of FEMA, I do want to tell you the White House coming forward today, Scott McClellan coming forward today, basically disputing your accounts of your meeting with the president. I’m looking at it here. It’s saying that you said you urged the president to replaced the embattled FEMA director because of the poor emergency response to Hurricane Katrina, but McClellan says that that’s not what you discussed with the president. You were discussing other things with the president, and that things are being twisted here a bit.”
PELOSI: Oh, that’s absolutely not true. Uh, Mr. McClellan wasn’t there, so he couldn’t possibly know. What happened was I said to the president, “Mr. President we can begin to help these, uh, victims of Katrina (sniff) become whole again. The first thing you can do is to uh, replace Michael Brown as the head of FEMA.” To which the president said, “Why would I do that?” And I said, “Because of what happened last week and the failure of FEMA to be the real link between the federal government and the people in need in our country, the social compact.” To which the president said, “What didn’t go right last week?” what happened in the meeting. I stand by that. If the president thinks everything went right last week, and he wants to keep Michael Brown there, then I think that’s going to be a cost to the American people in lives and livelihood. 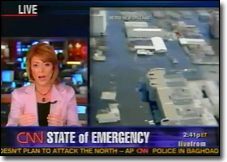 RUSH: All right. Well, we’ll just keep an eye on this death toll, Ms. Pelosi, and we’ll find out. But this went on. Ms. Phillips then said, “Well, if we want to be historical here and we want to back in time, then we can go back to the Times-Picayune and the investigation when reporters revealed time after time monies were asked for from all types of various politicians, politicians you work side by side with, laws that you yourself vote on, monies that should have gone to Louisiana to take care of the problems with regard to the flood control systems,” and then she kept going. She said this to Pelosi.
PHILLIPS: And I think it’s unfair that FEMA is just singled out. There are so many people responsible —
PELOSI: Right.
PHILLIPS: — for what has happened in the state of Louisiana.

PELOSI: That is true and I’m sorry that you think it’s unfair but I don’t. I think it’s unfair that people lost their family members, their lives, their livelihood, their homes, their opportunity, uh, and FEMA, uh, uh, is — did a poor job. It had no chance, it was.
PHILLIPS: But what about all those warnings —
PELOSI: May I please respond?
PHILLIPS: What about all the warnings from the Army Corps of Engineers years ago —
PELOSI: No!
PHILLIPS: — saying there’s a problem with these levees, there’s a problem with these cities?
PELOSI: Myra, Myra, Myra…
PHILLIPS: It’s Kyra. 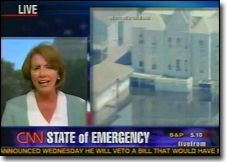 PELOSI: Thirty — 30 bodies retrieved from the nursing home last night, 14 from Memorial Hospital.
PHILLIPS: Should have happened.
RUSH: Now, I think what’s going on here, on the part of CNN — I haven’t talked about this before, but last week, who was it? I don’t remember who it was. It might have been Anderson Cooper. Somebody really jumped in somebody’s chili. Oh that was Miles O’Brien and Haley Barber, but a lot of CNN journalists have been going outside the bounds of just questioning and they say, “Wait a minute, to whatever government official they’re talking to, it doesn’t matter, state or federal, “You blew this. Who the hell are you to be passing the buck?” has been the tone of it and they’ve been getting great reviews, is the point. The blogs that analyze journalism have been saying, “Aha, is what journalism automatic to be. Journalism is coming back. Finally journalism is shedding its of government officials and journalism is coming back and showing what its real value and worth is to the country.” 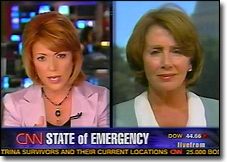 They’re replaying it. There they go. CNN right now is replaying the interview I just played the audio for you. They’re replaying it. It’s getting a lot of comment. Normally the media in the old days, they did think of their mission as to make sure the powerful were examined; the powerful weren’t going to get away with anything. The powerful were going to be held accountable and there was going to be suspicion of in power. Well, as we know, for recent decades, Democrats in power are never questioned and they are never suspected and they’re never queried. They are They are They are raised up. I think CNN is probably getting a whole bunch of positive feedback because their reporters and anchors are going for the throat with any official they talk to, and because of the reviews, they’re turning some of their people loose there. So that was an example.
In this case, Nancy Pelosi was totally not expecting it, but the questions that Kyra Phillips asked her were just right on the money. Who are you to criticize one agency? You’re up there with all these people. You saw all the money that wasn’t being spent and wasted and sent down to these places. How do you get to sit around and be an innocent bystander? How do you get to do that? And Pelosi is so nonplussed. “Well if you’re on the White House payroll, why don’t you just say so,” or something like that. So anyway, I wanted to save this bite today until after whatever happened with Mike Brown and the FEMA agency happened, and as we now know, Brown’s been dispatched back to Washington to head up the picture because there are other natural disasters lurking out there and we must prepare for them. Great thing about this business with Pelosi was, when Kyra Phillips wanted real answers, she didn’t have any. Nancy Pelosi doesn’t have any answers. The liberals All they can do is whine, complain, and moan and point fingers. So, haven’t heard this before on CNN. I wanted you to hear it.
END TRANSCRIPT