A Colossal Failure of Liberalism

RUSH: This is Jeannie in Houston. Hi, Jeannie. Welcome to the EIB Network.
CALLER: Hi, Rush. It’s a pleasure to talk to you.
RUSH: Thank you.
CALLER: You were talking about the political fallout for the governor and the mayor, but I’m talking about an immediate reaction like a recall. They’re going to have a tremendous amount of money pouring into the state, and they’ve shown at the very least a gross mismanagement and at the worst, huge graft.
RUSH: You know, that’s an interesting question because let me go back to something I mentioned at the top of the program to tell you where that battle is being fought. I mentioned earlier today a story in the New York Times by Robin Toner which says that this episode says the conservatives have a lot to answer for in the sense that conservatives have been hammering away at large government and they’ve been whittling away at large government, and they’ve taken the government down and they’ve limited it, and they’ve made it more efficient, they’ve made it smaller, and then this disaster comes along and look, why the conservative version of government doesn’t succeed. Well, of course that’s pure folly. The government is not smaller in any measurable away. It has been the desire of some conservatives, but it has not been the desire of this president. He may be conservative, but he has not tried to make the government smaller. This government has built more bureaucracy and layered it on top of other bureaucracies. Created homeland security, moved FEMA into it, and just made it all the more difficult here for the big bureaucracy to handle itself and to function efficiently as a small one would more likely do. So you’ve got that and that’s a media reality once again that’s totally untrue. There is no smaller government.
On the other hand, Jeannie, you have the literal fact that more money has gone to New Orleans for levees and the Corps of Engineers in five years of the Bush administration than any time during the Clinton administration. As you pointed out, the local officials have not spent it wisely, who knows where it’s gone. It hasn’t gone to poverty relief because the

poverty rate down there is bad. The reality is that you have a massive socialist type entitlement state in New Orleans and through a lot of Louisiana, and you look at when a disaster hits, the people are out there saying, “This is just really displaying the depths of American poverty.” No, it’s not. It’s displaying the depths of poverty in a liberal Democrat-run community, not the depths of poverty in America. You’re not seeing this, as I say, from Mississippi. You don’t see stuff like this when hurricanes go through Florida. You just do not see it. So what Governor Blanco and Mayor Nagin are saying is that it’s not their fault, that the government didn’t succeed, government didn’t work, and government needs to be bigger. The left is saying this proves that government is not yet big enough.

The lesson here is something that I and other conservatives have been saying for decades, and that is that self-reliance and self-responsibility are the best things to be able to fall back on. You hear that a disaster is coming, make sure that you have the ability to get out of the way. Make sure you have the ability to move. We’re talking about saving lives here. Everybody is going to suffer economic and financial losses in a disaster this size, so we’re talking about saving lives. Why is it that the people who were able to get themselves out have become enemies? Why is it that, “Well, easy for them to do, but what about the poor?” What about the poor? We still haven’t had the proper argument in this country about why they’re poor, and the reason that we haven’t is because the left believes they’re poor because of the construction of this country. They think that the system of capitalism dictates that there will be haves and have-nots and therefore there is no attempt even made to help the have-nots, that capitalism is comfortable with haves and have-nots. But socialism, even though it’s never worked, even though it is something that requires revolution, dictators, and walls to keep people in, even though it’s never worked, the self-loathers constantly rely on the promise of socialism and the promise of equality, the good intentions of equality. “We’ll make sure that there are no haves and have-nots, there are just haves.” Well, when you take away entrepreneurial capitalism and free markets, and that’s why socialism does, you don’t have achievers. You’ve got people that become more and more and then totally dependent. So the argument here really is, “Is the government not big enough, or is it too big?”
The media, which is creating a reality for everybody, is out there saying, “This proves small government doesn’t work and we need to have government get even bigger.” And mark my words, when the inevitable hearings begin, that will be the theme of the left. That government wasn’t big enough and it wasn’t ready enough and it needs a new department of disaster relief, we need a new cabinet level, homeland hurricane security, or whatever, something along these lines. And then we’ll have a whole new bureaucracy that’s supposed to sit around and do nothing but get ready for these. On the other hand, you’ll have people saying that, “No, the government is too big and if you’re going to make it even bigger it’s only going to get worse.” The bottom line, if you want the real truth, the bottom line is that the local and state governments failed miserably, there’s no question about it, I don’t care who wants to try to rewrite history here. The dirty little secret is that the feds got there pretty quick and they got there pretty quick with a lot of stuff that could help people. They got there faster than they got there in five other hurricanes. In some cases, the lag was five or six days. They were there in three days. This was big. We now know that the Salvation Army was ready with pallets of food and water to go to the convention center and the Superdome, but the state Department of Homeland Security said “No, if you take that stuff in there it’s only going to attract more people and we want to get them out.” As time goes on — this is why you’re going to see Democrats less and less eager for hearings. As time goes on, we’re going to learn that the federal government did pretty much what it is supposed to do in these circumstances, and that the one element of the federal government that the left literally despises, the US military, deserves the gold medal, and General Russell Honore, because once he got off the plane and started doing his John Wayne routine, things started happening, one guy in charge. He didn’t care about which bureaucrat he had to answer to, he didn’t care about the leaflet of forms that he had to go through, and check off that box, check off that box, call this bureaucrat, call that bureaucrat, fill out Form 345(b,) Section 2, subparagraph 4, he threw all that to the shreds, and simply started barking orders. 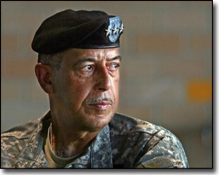 He said, “Damn it! Go out there and take care of that.” People started marching. So you can’t even really call the military a bureaucracy. It is a streamlined organization with a definite chain of command and when an order is given, it’s carried out. Most of the time, otherwise the person is shot. (Only kidding, members of the left.) But the fear of not carrying out an order is huge in the military. So as to your question, will there be political fallout? The governor and the mayor who may face a recall, I don’t know that it will get there, once it is finally learned how much money was spent down there, and once it is learned who actually prevented all that money from being spent — hello wacko environmentalists. Hello militant environmentalists wackos. If the truth, if the reality ever hits mass distribution, then there will be hell to pay. If the media reality of focusing all this on an inept big government, because of who’s running this big government, and that of course is George W. Bush, if it stays there, then Nagin and these local people will survive. But Jeannie, what’s happening now, you’ve got a record amount of federal aid coupled with private donations heading down to that region, and right now, while you could go down there and you could look and you wouldn’t see it, because it’s all happening behind closed doors, but right now the jockeying is on for who’s going to be in position to receive those dollars and distribute them. It is another scandal waiting to happen. You think the looting so far has been bad, ha. Wait ’til the looting of the $100 billion starts. You just wait. That’s what’s being set up now, who is going to be in positions of power to accept that money and distribute it, and I think that a large factor in this is the positioning that the mayor and the governor are taking here to try to be in position to have access to those dollars. When you’re in politics, it’s all about money. It’s all about raising it and spending it because that is where you derive your power, particularly in liberal and socialist-run communities. When you’ve got the money to pass out, and hand out, you’ve got the money to buy power. And put two and two together here.
END TRANSCRIPT