RUSH: Is it obvious to you that this is all falling apart on these people as it is to me? It’s clear that this is not about mass transit. Mary Landrieu, you put a bag of cow manure in front of her these days and she will step in it. So let’s listen to Tim Russert who grilled the mayor yesterday, Ray Nagin and Tim had a copy of the New Orleans evacuation order, which clearly stipulates that the mayor is in charge of everything. Now, get this. Russert’s question, “We’ve all seen this photograph of the submerged school buses. Why didn’t you declare, order a mandatory evacuation on Friday when the president declared an emergency, and have utilized those buses to get people out of the city?”
NAGIN: We did the things that we thought were best based on the information that we had. Sure there was lots of buses out there. But guess what? You can’t find drivers that would stay behind with a category five hurricane, you know, pending down on New Orleans. We barely got enough drivers to move people on Sunday or — on Sunday, Saturday and Sunday, to move them to the Superdome. We barely had enough drivers for that. So sure, we had the assets, but the drivers just weren’t available.

RUSH: You just can’t get people to show up. You just can’t get people to show up to work. What if you said, mayor, what if the said to the drivers whose job it is to drive the buses, “Look, this will get you out of here, too. If you’re driving the bus, you will succeed in evacuating. And we’ll even let you bring your family. If you don’t have a car, we’ll let you bring your family, put your family on the bus as you’re evacuating those who need help to get out, and we will kill two birds with one stone. We’ll save you and your family and the school bus and the people who are being transported out.”
Now, my friends, I’m not even an elected city official and I could think of this. Couldn’t get the drivers. So no matter where you turn in this state, whether it’s Senator Landrieu or Mayor Nagin, you just can’t find good people, they just won’t hang around and show up to work. Next question from Russert is kind of long. He said, “Mr. Mayor, if you read the city of New Orleans comprehensive — and I’ve read it, and I’ll show it to you and our viewers — it says very clearly, ‘Conduct of an actual evacuation will be the responsibility of the mayor of New Orleans, the city of New Orleans to utilize all available resources to quickly and safely evacuate threatened areas. Special arrangements will be made to evacuate persons unable to transport themselves or who require specific life saving assistance. Additional personnel will be recruited to assist in evacuating procedures as needed. Approximately a hundred thousand citizens of New Orleans do not have the means of personal transportation.’ So, mayor, it was your responsibility, where was planning, where was the preparation, where was the execution, why couldn’t you find people to drive those buses?”

NAGIN: The planning was always in getting people to higher ground, getting them to safety. That’s what we meant by evacuation, get them out of their homes which most people are under sea level, get them to higher ground and then depend upon our state and our federal officials to move them out of harm’s way after the storm has hit.
RUSH: Oh. Have you heard this one before yesterday? No, I hadn’t heard this before yesterday. So now all the city had to do was get them above sea level and then the state and the feds are supposed to come in and get them to hell the rest out. Notice the governor does not escape here any sense of responsibility on the part of the mayor.
BREAK TRANSCRIPT
Let me play a piece of audio for you, folks. Cookie tells me, this is from Wednesday, August 31st, and this is between network interviews, Kathleen Blanco, the governor of Louisiana, was going from one network to another to another, to do interviews, but between interviews, she was overheard speaking to her press secretary, Denise Bottcher, and she admits that she should have asked for military assistance much earlier, but that she didn’t want that because she didn’t want the military to put good people in jeopardy. Here’s what she had to say again, talking to her press secretary between interviews on various cable networks. 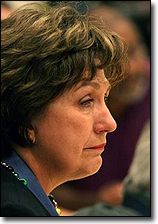 BLANCO: I said we’re not tolerating asking for more military presence. But I mean — but I’m saying put good people at jeopardy, potentially. I really need to call for the military. I should have started that in the first call.
RUSH: Okay, so she’s feeling remorse that she didn’t call the military out sooner, she should have done that in the first call, but she just didn’t feel right calling the military out because that would put good people in jeopardy, potentially. Now, what underlying world view must you have to think that the military will put good people in jeopardy? I have the answer. A liberal world view will help you with that. You have a liberal world view, then you know that the military puts good people in jeopardy. So she was resisting because of an apparent ingrained ideological bias against the military.
Michael in Lafayette, Louisiana, I’m glad you called, welcome to the EIB Network.
CALLER: Thank you, Rush. Pleasure to talk to you.
RUSH: Thank you, sir.
CALLER: I was driving through Houston last week coming back from a run and I was listening to local radio stations and they were interviewing evacuees at the Astrodome, and time after time I’d hear one of them say, “Well, I have no plans of returning to New Orleans. What’s to go back to?” And as I kept hearing this, this optimism started rising in me, and then I realized that this is the best thing I’ve ever heard, because if the Democratic base thins out and moves out, we might have a chance to turn this state into what it deserves to be.
RUSH: You know something, we talked about this on Friday, Michael. This is happening in the northeast in the Rust Belt states to the Democrats, people are leaving those regions for other parts of the country, for more economic opportunity, better climates and so forth. And already there are a couple of stories, I’ve got them here in the stacks, your instinct is right on the money. The Democrats are starting to worry that a huge number of citizens from New Orleans may not go back, and that’s going to upset the balance down there which gives New Orleans in statewide elections all this power and prominence, because that’s where Landrieu’s base is, that’s where margin of victory is in the statewide Senate race.
END TRANSCRIPT