RUSH: All right, Mary Landrieu. I have teased you long enough. And, by the way, I’m getting a lot of I wouldn’t say grief, but people say, “Rush, are you okay?” Because last week I said, you know, I like Mary Landrieu. She’s a swing vote in the Senate, she’s not one of these pedal-to-the-metal libs that doesn’t move off of it now and then, and I said some days she actually looks cute to me, nice looking woman, still has some of her baby fat in fact. And people have been questioning my judgment ever since. Even Cookie here on the cue sheet roster, “Mary cute baby fat Landrieu,” you know, with a little smirk here towards me. Anyway, here’s what happened. I just want you to imagine if a Republican governor, if there were a Republican governor, or Senator, white, talking about black employees in a city and saying what Mary Landrieu says here in this bite, I want to know if he’d have gotten away with it. Here’s the question from Chris Wallace. “Senator Landrieu, I want to ask you, and I’m going to ask you both–” some other senator was on there, too “–about the local response. Was it incompetent and insulting for Mayor Ray Nagin to order a mandatory evacuation, but then to leave buses–” and we got a picture of these buses “–hundreds of buses idle so that they could be flooded instead of using them to get people out?”
LANDRIEU: I was there, as you know, through the whole ordeal with state and local officials and was right there with Louisiana Democrats and Republicans, city council members, police chiefs, mayors, the governors, and could watch what Haley Barbour was doing and Governor Riley in Alabama. I am not going to level criticism at the local level. These people —
REPORTER: But I’d like you to answer if you could this one specific question —

The question I have for both Mary Landrieu and Governor Blanco, who are their controllers, who’s running them? Is it Howard Dean? Is it Harry Reid? Which member of the Democratic Party apparatus is coordinating all this so there is not a deviation from the plan to keep all the focus on Bush and FEMA and other places? As I say, we’re going to nuke this whole notion today. I’m sure you’ve heard about this great piece in the Pittsburgh Post-Gazette by a guy named Jack Kelly: The federal response to Katrina was not as portrayed. And, folks, I have to tell you this, too, there was an absolutely fabulous story in the Palm Beach Post yesterday, it was by Dara Kam and Alan Gomez: Lack of plan hurt Katrina-hit states’ response, is the headline. You know what this story does? This story talks to Florida state and local officials on how they have dealt with hurricanes. Mentions not a word about the feds. Talks about the plans that they have here in Florida, how often they meet to take tests and temperatures of the plans and then to do dry runs. It even mentions that some of these Florida executives and planners called Louisiana and Mississippi when they learned Katrina was going to miss the Florida panhandle and offered their services and both states turned them down, but it’s a fascinating story. It appeared yesterday in the Palm Beach Post, and it really explains how all of this preparedness is a local and state responsibility, that it is not a federal responsibility. Mr. Snerdley wants to know what am I doing reading the Palm Beach Post. All right, I mess fess up, I wasn’t. It was recommended to me. Snerdley is in there wiping his brow. “Whew.” No, I wasn’t. It was recommended to me by someone who read it, so I remembered late yesterday afternoon between football games to go check the website and there it was. Trish in Alberta, Canada, I’m glad you called. Welcome to the EIB Network. Hi.
CALLER: Good morning, Rush.
RUSH: Hi.
CALLER: Hi. I was listening to this whole thing on Fox News yesterday as well, and what struck me, it was incredible to hear Mary Landrieu blame the Bush administration for not spending their surplus to help refurbish these levees. Clinton could not do it, he had to cut back on the funds because he was dealing with the deficit left over by the Reagan administration, and then she added the first Bush administration. And I’m sitting there thinking, my God, a year ago all we were hearing from these Democrats was that it was the worst economy since Herbert Hoover. Now, where did Bush’s surplus come from, where did it magically appear from?
RUSH: I know, there isn’t one.
CALLER: Exactly, and there wasn’t one with Clinton.
RUSH: I’ve got some more Mary Landrieu sound bites coming up, but the reason why I asked the question about who is controlling her and who is running Kathleen Blanco, it is clear that left on their own, folks, they’re going to step in it. You put a bag of cow manure out there and most of these people are going to step in it, and somebody’s going to be guiding them away from the cow manure. And yesterday somebody was unable to keep Mary Landrieu out of the cow manure.
CALLER: Yes, sir.

RUSH: I mean, she literally just stepped right in it here. “Well, most mayors can’t get their people to work on an sunny day.” Yeah, like everybody, this is understood. Is that the way we look at bureaucrats and their employees? “Come on, everybody knows that the people aren’t going to go to work.” What is that, the soft bigotry of low expectations? What, are local civil service jobs simply patronage jobs just to give them a paycheck and whether they show up to work or not is no big deal? It’s amazing. You know, I used to call it shiftless and lazy, but now, see, we can’t call it shiftless and lazy because that would be simplistic. We have to understand why they are shiftless and lazy and who wouldn’t be when they see all these people making so much money at Enron and Halliburton, what is the point of going to work if you can’t get anywhere near a decent wage when there Enrons and WorldComs and Halliburtons and Cheneys and Bushes out there. “They have no hope, Rush, why should they go to work? It’s not going to lead them anywhere.” The anthem of the self-loathers. You always have to understand root causes. You can never blame victims. You can never blame the poor. Nobody is ever responsible for what happens to them. Even those who didn’t get out of New Orleans, it’s not their fault. Even those that could and didn’t, it’s not their fault, it’s not their fault. You have to understand the root causes, and it all boils down to what the hate-America crowd sees: a basic unfairness and inequality in the way the country is designed, in the way the country is put together.
BREAK TRANSCRIPT 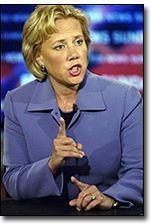 RUSH: Here’s the sound bite from the woman that called from Alberta, Canada, Trish. We have the sound bite she was referring to from Mary Landrieu yesterday on Fox News Sunday. The host Chris Wallace with Mary Landrieu says basically, “Is it just the president who gambled and lost, or, frankly, did a lot of Louisiana politicians, including you?”
LANDRIEU: The president gambled and lost, and I’ll tell you why, if you’ll let me answer this question. Number one, it is true that the president gave slightly more than Bill Clinton. But what is also true is Bill Clinton was running the largest deficit created by the Reagan administration before him, and the Bush administration before him. President Bush was running a surplus. Yet when he had a surplus, he didn’t invest it in levees and flood protection for people from Miami to Orlando to New Orleans to Biloxi or to Mobile.
RUSH: This is sad. This is what Trish was talking about. It’s just patently sad that somebody with this limited amount of understanding and knowledge is actually in the US Senate. The nineties were the greatest decade for economic activity in recent years, I thought. When was the peace dividend and all the surplus? Well, that came after the Soviet Union and the wall fell, and the Clinton administration got rid of all those big deficits. This surplus that she’s talking about, there never was a surplus. It was ten-year economic forecasts. But anybody with half a brain can tell you, folks, that two things are going to happen when a government report says there’s a huge surplus in the out years. A, government is going to suggest raising taxes, not cutting them, and, B, they’re going to spend it. And this is precisely what happened. There never was a surplus. This is a Democrat mantra talking point about how the Bush administration squandered this giant surplus left by the Clinton administration. But deficits only stop Democrats from spending when they are Republican deficits. But the point is she didn’t answer the question. Hey, Wallace tried, you’ve got to give him credit. But it was clear, more money was spent on the levees, more money was given to the Corps of Engineers during the five years of the Bush administration to date than were sent during equivalent period of time during the Clinton presidency. And, you know, she’s out there fudging the numbers on the levee project. She cooked the books (Money Flowed to Questionable Projects).
Remember, they had a report that said the cost-benefit analysis to fixing the levees would not make it sensible to do, and she went back and she told the Corps to basically to cook the books, to do some recalculations to show that it would, in order to get the money. The question is where did the money go? It went to the Corps but it didn’t go to these levee projects which everybody has been warning about for five or ten years. And the idea that it can now fashionably be blamed on Bush — folks, it’s as specious — and that’s why I say this is a modern media scandal from the death toll to the hysteria to the willing attempt to join forces with the left to blame this on Bush. It’s just the new Cindy Sheehan. It’s all it’s ever been. And it was camouflaged and disguised with all the pictures of sadness and horror that we saw. So when you couple the projections of thousands and thousands and thousands of dead with the pictures and Republicans unwilling to stand up to it, it gave this whole scandal a legitimacy that it apparently doesn’t — well, “scandal” — gave it a legitimacy it doesn’t deserve.
END TRANSCRIPT