The One Democratic Moment (To Destroy Roberts) 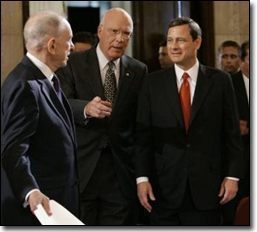 RUSH: Folks, I have detected a theme. And I haven’t had a whole lot of time to watch this, but I have had the top-of-the-hour break here, checked in with the confirmation hearings of Judge John Roberts, opening statements by all the senators are still underway. The Democrats, every one of them that I have seen have sought to portray these hearings as the in the life of a judge, the .
In fact, Leahy has said, “It’s the one moment in time that we, the people have to find out what kind of a scumbag you are.” He didn’t say scumbag (story). I’m reading his mind. But nevertheless, they’re trying to envelope and embrace the American people by letting the American people know, “We’re doing this for you, we’re going to destroy this guy or try to, for you.” It’s the in the life of a judge. How many times has this guy been before this committee? Roberts has appeared before this committee at least in one other, two other confirmation hearings, or is it one? It’s two, isn’t it? He’s been up there I know for at least one confirmation hearing. It was one. And he got unanimous approval coming out of the committee the last time. So, anyway, not much happening other than the opening posturing, as I said, all the networks that I’m watching. We don’t have C-SPAN3 here. They’re going gavel to gavel. We’re watching back and forth on the three cable news networks, and they’re all covering this as though its election night, and I’m just waiting for the first network to make the call, to put their projection up there on screen, predicting that Roberts wins or loses confirmation, because it’s being covered in just that way.
BREAK TRANSCRIPT
Judge John Roberts still doing a fabulous job. It’s been an hour and a half so far, still doing a fabulous job, hasn’t said a word but looks more concerned and interested than any nominee I can recall in my life, folks, as he listens to these blowhards tell him, you know, what he’s got to do and what they think. I’m a little down on Congress. I really am. Pass-buck artists extraordinaire, take responsibility for , act as grand inquisitors, get the power and the right to go destroy other people’s lives. I’m just down on Congress.
END TRANSCRIPT