RUSH: Now, Senator Biden, it was his turn to question Judge Roberts this morning just before the recess. We have four sound bites. Biden started this way, “Justice Ginsburg answered the question. She never wrote about it. She answered it specifically. She went on to say that, and let me quote, she said (and this is quoting Justice Ginsburg) he goes on to say, “‘History, counsel, caution, and restraint,'” and I agree with him. He says then — this is referring to the majority opinion — but it does not counsel abandonment, abandonment of the notion that people have the right to certain fundamental decisions about their lives without interference from the state,” and what he next says, “Is history doesn’t counsel abandonment nor does it require what the city is urging here, cutting off the family right at the first boundary, which is a nuclear family.” He rejects that. “I am taking a position I have all the time.” Then she goes on to say, “Un-uhh. She thinks your old boss was dead wrong. She said so, and she said the majority was dead right. The Ginsburg rule, what do you think? She never wrote about it.”
ROBERTS: Senator, I think the nominees have to draw the line where they’re comfortable. It’s a matter of —
BIDEN: You’re not applying the Ginsburg —
SPECTER: Let him finish.
BIDEN: I don’t have much time. But go ahead.
ROBERTS: It’s a matter of great importance, not only to potential justices but to judges. We are sensitive to the need to maintain the independence and integrity of the court. I think it’s vitally important that nominees, to use Justice Ginsburg’s words, “no hints, no forecasts, no previews.”
RUSH: Biden shot back with this.

BIDEN: That is not true, judge. Justice Ginsburg violated that rule according to you. Justice Ginsburg said — Ginsburg said precisely what position she agreed on. Did she in fact somehow compromise herself when she answered that question?
ROBERTS: She said, “No hints, no forecasts, no previews.”
BIDEN: No, no. Judge, she specifically, in response to a question, whether or not she agreed with the majority or minority opinion, in Moore vs. The City of Cleveland said explicitly, “I agree with the majority, and here’s what the majority said, and I agree with it.” My question to you is, do you agree with it or not?
VOICE: Well, I do know, senator, that in numerous other cases, because I read the transcript —
BIDEN: So did I, judge.
ROBERTS: — she took the position that she should not comment. Justice O’Connor took the same position. She was asked about a particular case.
BIDEN: Oh, judge, no, I don’t have a lot of time.
ROBERTS: It is not correct for me to comment. There’s a reason for that —
SPECTER: Wait a minute, Senator Biden. He’s not finished his answer.
BIDEN: He’s filibustering, Senator.
SPECTER: Okay, go ahead.

(Chamber Audience Laughs)
SPECTOR: No, he’s not.
ROBERTS: That’s a bad word, Senator.
RUSH: That’s a bad word. Okay. So that’s how that transpired. Then Judge Roberts finally got a chance to answer and said this.
ROBERTS: Senator, my answer is that the independence and integrity of the Supreme Court requires that nominees before this committee for a position on that court not forecast, give predictions, give hints, about how they might rule in cases that might —
BIDEN: I got that, judge.
ROBERTS: — go before the court.
BIDEN: Did Justice Ginsburg give a hint on the specific question? 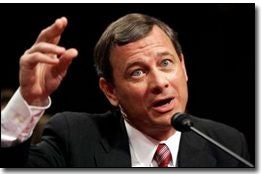 ROBERTS: I’m not going to comment on whether or not a particular nominee adhered to the approach that they announced.
BIDEN: Well, let’s make it clear, she did not. Let’s stipulate, she did not adhere to the approach.
RUSH: Well, so this is an attempt to trip Roberts up. The Ginsburg rule, we knew that he was going to invoke it. “Hey, you didn’t make her answer these specific questions.” The caveat here is this: Ginsburg did answer questions about things that she had previously written, when there was a record. Now, Biden doesn’t mention this, at least not in the bites that we have here, but she did offer to confirm things that she had written on previous cases and so forth, which some would say violated her own rule, but in that case she was commenting on herself. Now, we have here a montage. It’s a very short one, 17 seconds, back from 1993, at the Senate judiciary committee hearing for Ruth Bader Ginsburg and her confirmation, and this is a montage of Senator Biden with Judge Ginsburg. You’ll hear a little music here at the beginning.
BIDEN: You not only have a right to choose what you will answer and not answer, but in my view you should not answer.
GINSBURG: I do not want to give here any hints. I would not like to answer that question. I cannot say anything more than I have already said.
RUSH: And so you hear a totally different tone with Judge Ginsburg back in 1993 from Senator Biden, who said, “You not only have a right to choose what you will answer and not answer, but in my view you shouldn’t answer.” Now, granted these hearings are partisan and back when, you know, the Democrat nominee, you have deference on the Democratic side just as you have deference on the Republican side here to Judge Roberts. See, I think that deference is a little… I mean, it’s comfortable to some people, and it’s welcome, but I think the Republicans are perfectly entitled to ask questions about judicial philosophy, not specific cases, but judicial philosophy. That’s what our concern with the construction of the court is, and to the extent Democrats want to be partisan and so forth that’s expected, but the Republicans can do a little bit more than defense. They can also get specific about judicial philosophy. It’s a key element to all of this. But anyway, it’s just interesting to listen to the differences in Senator Biden when the nominee is of his party versus the opposite.
BREAK TRANSCRIPT

Just a little comment here about Biden. I don’t think Biden laid a hand on Judge Roberts there. The argument was about a case that, at the time, a memo that Roberts had written about a case, and at the time the case was unsettled. Today it is, and so the line of questioning was a little bit misleading, as though the case is still up for grabs and Roberts not wanting to answer it when it’s already settled law. But Roberts, he’s not going to talk about the future. He’s not going to get into any of these hypotheticals and tell these guys how he’s going to rule. So all in all, I think that the biggest disappointment for the left today is that the hearings were boring, that they haven’t scored any points. You’ve had Ted Kennedy out there acting like this guy is a mean-spirited racist and bigot, and the last thing he comes off as is mean spirited. So once again the credibility of the left’s accusations is exposed as totally fraudulent, particularly for a nation of pictures. You can go out there all day long and say Judge Roberts hates blacks and he doesn’t know failure and he’s a racist and a bigot and all this, but you watch him and you do see that. You don’t see any personality evidence of it. You don’t hear anything out of his mouth that gives credence to it. So what you have is the same old playbook. It’s like Jeff Sessions said yesterday in his opening statement. The great senator from Alabama, Senator Sessions told Judge Roberts, “You know, you’re just a victim of a form attack here. The Democrats have a form, and they’ve just filled your name in on the blanks where there’s a name to be placed. You are a racist. You are a sexist. You’re this. You’re that. You’re against civil rights. You’re against women’s rights, and you’re going to have to put up with it, judge, because this is the way they play the game. It’s a form criticism and a form critique and it’s just your name that happens to be filled out on the form today,” and that’s pretty much true. It’s the same old, tired, worn-out allegations from a long-ago prepared Democrat handbook that’s not been modernized nor updated.
END TRANSCRIPT