RUSH: Let me go to line three. Cyrus has been waiting for a long time from Foothill Ranch, California. Hi, Cyrus. I’m glad you called, and welcome to the program.
CALLER: Hi, Rush. I just wanted to get your take on these charges or indictments handed down to the nursing home owners there in Louisiana.
RUSH: Well, I have a number. You mean the 39 people that were discovered, the bodies that were discovered in this nursing home that nobody knew about?
CALLER: Yeah, the 34. 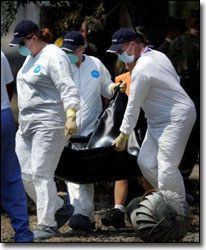 RUSH: Thirty-four bodies. Yeah. My first thought on that was they’re going to have to revise the body count down because these deaths are not attributable to Bush, and the body count, of course, the death toll is directly attributable to Bush. Bush killed those people, but obviously Bush didn’t kill these people because they were neglected, no attempt was made to get them out. Involuntary homicide I think is the charge, correct?
CALLER: I’m really not sure.
RUSH: I think that’s what it was, it was involuntary homicide, and apparently the temperature got to be 106 in there. Now, I may be confusing this with the hospital.
CALLER: Yeah.
RUSH: Yeah, the hospital is where 45 people were found. This is a different case, these 34. In a disaster like this and the people couldn’t get any rescue efforts to the residents of the nursing home to get out of there, I don’t know, this is a toughie. You may be able to lay this one at the feet of Bush. Isn’t that what you’re thinking?
CALLER: No, not at all. In fact, I just found it kind of peculiar or the irony of it when the attorney general is quoted as saying that it was just pathetic because they were asked if they wanted to move these patients, and they did not, and it just seems like they’re being indicted for either not having an evacuation plan or not following one, and to be quite honest with you when I first heard the story I thought they were talking about the mayor and the governor of Louisiana, and I had pictures of the submerged school buses and everything, and the evacuation plan defined there that wasn’t being followed.
RUSH: Well, you know, we know that they didn’t do anything wrong now. There’s been enough investigation now that the mayor and the governor gave it their best shot. They used all the resources and they were lied to by the federal government. They depended on a federal assistance plan that never got there, never showed up. We all know why. Because New Orleans, nobody cares about a bunch of poor people, they vote Democrat anyway, so what the hell. We had a woman that spoke very eloquently about this very fact yesterday. It was Donna Schumer from South Windsor, Connecticut. She changed my mind on this, and I think these nursing home owners, had they at least made the effort to get these people out of there, they probably would have escaped any charge. But since they just fled, the “out” for them is to say, “Well, the promised rescue efforts and the assistance that we needed never showed up,” and of course now everybody knows why that is, it was Bush’s fault. Joe in Santa Rosa, California, welcome to the program, sir. Nice to have you with us.

CALLER: Hubba hubba, Rush. I’m good for 25 bucks to the William Jefferson Defense Fund just for comedic value. Now I guess we know what the school buses were full of, the few they had running, but that’s not why I called. I know you’d do this stuff for free because you love your job and you’re a blessed man, on loan from Go-d-d. But I was leaving home this morning to go play hoops with some buddies, and I keep my TV on because there’s no one at home, and I recognized the mayor’s voice just as I do my mother’s, and as I’m leaving out the front door I hear his voice and I stopped for a second, and I’m quoting him as best I can. Here’s what I heard the mayor of New Orleans say. “I’m the mayor of New Orleans, and it’s my responsibility to guard this city, and we’re contemplating filing for bankruptcy because our coffers are empty.” Now, I don’t have a college degree, but I got a feeling a billion dollars a day for the last ten days goes a pretty long way, but he’s contemplating filing for bankruptcy. If this wasn’t so tragic, it would be comedic. I’m just calling to verify what I heard was correct.
RUSH: No, no, actually he said this during the day yesterday, and I have been aware of this since before the program started. You heard it correct. He says New Orleans is bankrupt.
CALLER: Before we leave — and I’ll hear your opinion off the air — but Snerdley deserves a raise, and I want to put out a hoorah to my brothers and sisters in Iraq and Afghanistan. I’m proud of you guys, and keep up the good work. I’ll listen to your opinion off the air.
RUSH: Joe, thanks for the call, Santa Rosa. I appreciate that very much. Santa Rosa is where Mark Felt’s family lives, so we know about Santa Rosa. Deep Throat. We know about Santa Rosa. At any rate, it’s interesting. The French Quarter is going to be open at the end of the week. Hotels going to be open for business by the end of the week. I want to take you back, folks. I want to take you back to the Monday before the levees broke or whenever it was, and I was on this program talking about all the doom and gloom and so forth, and I said, “You wait, the rebuilding effort here is going to shock people.” Everybody is acting like New Orleans is dead and done forever, and I just went through a list of things reminding

everybody about the can-do spirit of America. And this is all in the context of the people who make the country work, and they’re going to be down there and they’re going to be doing what they can to rebuild and salvage what they can, and they’re just like everybody else, they’re going to want to return to normalcy as quickly as they can, and so you’ve got some hotels opening, you’ve got the French Quarter opening up by the end of the week. The airport for commercial traffic, first analysis, was going to be closed for two months, and it was going to be basically a triage and morgue setup to deal with the tens of thousands of bodies which, by the way, Governor Blanco is still upset that nobody can find, but now the airport is open today for commercial traffic. The original date was much later, then they revised it to September 19th. Well, this is September the 14th, and it’s open today for commercial traffic. So I think saying the city is bankrupt, to answer your question, is nothing more than the mayor attempting to continue this picture he’s painted of utter, total devastation.
You raise an interesting point about the relief money that’s been appropriated by Congress and it will end up being at least a hundred billion or more, and there’s still a question over who gets that. I think partially — this is just a surmise here — but I think the mayor claiming bankruptcy is almost a request, “Give me the money, give the City of New Orleans the money.” If you study these things, if you’ve been interested in politics for any length of time at all, you know it’s all about money. Follow the money and you will answer almost every question you have about political issues. So there is this endless train of money that’s going to come into this state and the city, and there is jockeying right now in that state for who is going to be in charge of receiving it and distributing it, because that’s where the power of politics lies, and New Orleans particularly has been an entitlement state, a welfare state. This is how they have survived, and having this government get hold of the funds and then parcel them out as they wish. We know that all kinds of money was allocated for the Corps of Engineers for flood projects and levee control, and it never got spent on any of that. We don’t know where it went, we’ll never find out where it went. We only know that it didn’t go for the purposes it was intended. So, “Hey, we’re bankrupt here in New Orleans,” is perhaps a plea to send some of that aid money in the form of cash to the city, because, “Hey, we’ve been devastated here by this hurricane. We’ve got it get up and running real fast here.” So it’s hard not to be cynical about this and at the same time be sympathetic and understand that there are obviously a lot of financial problems. We don’t know what the status of banks is. We don’t know what the status of the bank records are. We don’t know what the status of the city’s accounts happen to be, whether they were backed up anywhere off site. All of these unknowable questions still haven’t been answered. So saying we’re bankrupt may simply mean, “I can’t get my hands on any money.”
END TRANSCRIPT