RUSH: Let me see. (sigh) I don’t want to play all four of these. The money sound bite is from Lieutenant General Russell “Ragin’ Cajun” Honore. He has a press conference. (sigh) I guess I gotta play all of these. I don’t want to play all of these. I got four of these things and the money one is the last one. I’ll go to the money one. I’ll set this up. He’s got a press conference. The mayor is getting questions, and Honore gets fed up and takes over the press conference, because he gets fed up with the questions that the reporters are asking. In fact, let’s play the last two, grab cut eight and grab cut nine. An unidentified reporter said, “General Honore, we were told that Vernon Stadium will be another staging area. Are you using that area or not?” 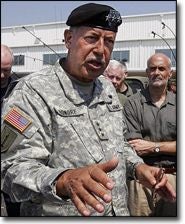 HONORE: Understand that there’s a problem in getting communications out. That’s where we need your help. But let’s not confuse the questions with the answers. Buses at the convention center will move our citizens for whom we have sworn that we will support and defend, hooah? and we’ll move them on. Let’s not get stuck on the last storm. You’re asking last-storm questions for people who are concerned about the storm. Don’t get stuck on stupid, reporters. We’re moving forward — and don’t confuse the people, please. You’re a part of the public message. So help us get the message straight.
RUSH: So he’s getting frustrated because he knows that he’s just facing a bunch of people that are confrontational and argumentative and are really not interested in the facts of what he’s saying and he’s down there trying to help people find their way back out of this town, as Hurricane Rita threatens the area with more flooding. An unidentified reporter says, “Just understand a little bit more about why that’s happening this time, though, and did not happen last time. The question here: Why are you doing it this time and you didn’t do it last time?”
HONORE: You are stuck on stupid. I’m not going to answer that question. We’ve got to deal with Rita. This is public information that people are depending on the government to put out. This is the way we gotta do it. So please, I apologize to you, but let’s talk about the future. Rita is happening. Right now we need to get good, clean information out to the people that they can use, hooah? and we can have a conversation on the side about the past a few months from now.

RUSH: Yeah, “In which I will give you the riot act is what he’s saying.”
“You are stuck on stupid.” That the line of the day. That the perfect response to any badgering reporter’s question: Yeah, he said it. He said it twice. He said, “Don’t get stuck on stupid,” and then somebody asked him a stupid question and he said, “You are stuck on stupid.” Now, understand what the press conference was about. Here’s Honore announcing the plan to get whoever is still left in New Orleans out of town, and they’ve got the buses lined up this time, and you’ll note that the mayor, he’s not the one that’s ultimately giving these orders. Honore takes over this press conference, and the reporters keep asking him, “How come you’re doing it right this time? How come it didn’t happen last time?”
“You are stuck on stupid.” The person to ask that question to is Mayor Nagin. The person to ask that question to is Governor Blanco. By the way, in the press, do any of you ever see the words “Democrat mayor Ray Nagin” or “Democrat governor, Kathleen Blanco”?

No, tell me. I haven’t seen it, but others may have. Have you seen it, Mr. Snerdley? Democrat governor once in a while, but I remember “Secretary of State Katherine Harris” all over, Supreme Court nominee, Republican this, Republican that. But hardly any mention of the political party affiliation of the mayor, Ray “School Bus” Nagin and the Governor Kathleen “I should have called the military in sooner” Blanco. So it dovetails with the story that the Democrats are upset. What are we supposed to do, slow down the response here to Hurricane Rita to make it fair with what happened in New Orleans? They want an investigation. “We’re moving faster. Why is that?” They want an investigation on why we’re moving faster! They don’t allow for maybe the people in Texas have seen what happened in New Orleans and the local officials there are getting in gear a lot sooner than the local officials did in New Orleans, and they don’t account for the fact that they’ve seen Florida get into action with Hurricane Rita as it went through the Keys and it’s hard not to learn from people who do it right. What are we supposed to do, learn from New Orleans and do it Are we supposed to slow it down? Are we’re supposed to slow down the response so it will be fair? No, of course not. What we’re supposed to do is penalize and cast aspersions on Bush, because this proves he cares more about Texans than he cares about poor people from Louisiana, and they just keep barking up this tree and it’s part of the cycle, folks.
I keep telling you. It is part of the news cycle and it’s arguably a five-year cycle, and that cycle is, “What can we do to hurt Bush? How will this hurt Bush, how might it help Bush? How can we make sure it doesn’t help Bush? How can this help the Democrats? What can the Democrats do to benefit from this?” Whatever the story is, those are the questions that surround it — and there remains a huge current of events that they are missing, such as something is going in Texas. The evacuation plan is underway, and the buses are already in gear, getting people out of Galveston County and near the Houston area. They’re already taking steps to do what they can to depopulate the oil rigs and so forth that are standing in the way of the approaching hurricane, and rather than see that, “Okay, maybe we figured it out we’re doing something right here,” let’s keep focusing on what went wrong and try to cast aspersions on Bush for, “doing it right this time; why didn’t he do it right last time?” Folks, just trust me on this, it’s not persuading anybody. They’re talking to each other.
END TRANSCRIPT