RUSH: This from the New York Sun today: “Responding to statements made last week by Rep. Charles Rangel, the Republican National Committee urged Democratic leaders yesterday to denounce the New York congressman’s comparison of President Bush to the late Theophilus ‘Bull’ Connor, the Birmingham, Ala., police commissioner who came to symbolize Southern racism in the 1960s. The Republican request for repudiation, however, met with expressions of support for Mr. Rangel’s statement, particularly from black Democratic leaders in New York. The Reverend Al Sharpton came out in support of Mr. Rangel’s analysis, and another member of the city’s congressional delegation, Major Owens, a Democrat of Brooklyn, denounced Mr. Bush as ‘even more diabolical’ than Connor. At a town hall meeting of the Congressional Black Caucus held in Washington last Thursday, Mr. Rangel, a Democrat of Harlem, faulted Mr. Bush for his response to Hurricane Katrina. Lambasting the president for being insensitive to blacks affected by the storm, Mr. Rangel said, to an appreciative audience: ‘George Bush is our Bull Connor.'” Well, just to remind you, Bull Connor in 1963, “turned attack dogs and fire hoses on blacks, including Martin Luther King Jr., demonstrating for equal rights. Yesterday, Mr. Rangel, reached by phone, elaborated on his comments, saying he made the comparison because Mr. Bush, like Connor, had become a rallying point for America’s blacks.”
Well, you know, let’s go back to the Times-Picayune of yesterday and the LA Times today. We found out that all this reporting of what was going on down there was absolutely bogus. None of it happened. No anarchy, no rapes, no murders, none of this stuff. It didn’t happen at the Superdome or the convention center, and Mike Brown testifying at FEMA

today has essentially said, “Hey, I believed the media reports of what was going on. We had buses ready to evacuate the Superdome, but I’m not law enforcement. FEMA doesn’t carry guns. We’re not armed. We’re volunteers. We’re bus drivers. We’re not going to go into that circumstance.” If anybody is responsible for this delayed response, folks, let’s point the finger where it deserves to be pointed and that is at cable television news networks, all of them, every one of them, spreading rumors, amplifying rumors, compounding them. No filter. No double sourcing, no triple sourcing. Just like Dan Rather, they wanted the story to be true.
They thought it had to be true. Bush is president, and Bush is hateful, and Bush is insensitive and Bush is Republican. Therefore Bush is a racist. Therefore it had to be true. There was not even any doubt. There wasn’t any speculation. You know where the real racism comes in? Can I tell you where the real racism comes in? The real racism is when you have a bunch of white reporters down in New Orleans who are hearing all this that black people are doing and they believe it. That’s the racism, folks: when a bunch of so-called better-than-everybody-else white people, white liberals who think they’re a cut above, that they’re the elites, when they hear about all this mayhem and anarchy going on in primarily a black neighborhood, they believe it. They’re the ones who think this is possible. They’re the ones who think blacks are doing this, but they will not blame the blacks. They will blame Republicans for making this circumstance possible. That’s why this happened, because the people on the ground reporting this, “Wow, you hear about this? Rapes in the Superdome! Hear about all this? Well, you know how those people are. This is Bush’s fault.”

That’s where the real racism is, folks, with a bunch of white liberal plantation owner elitists believing stories, rumors like this are true. Let me ask you a question. You’re down there. You’re reporting this, or maybe you’re not reporting it. You’re watching it on television, and you hear all this. You don’t see it. You haven’t seen one rape. You haven’t seen video of a victim of a rape. You haven’t seen video of a victim of a murder. You haven’t seen a murder take place. You don’t even have cameras inside the Superdome telling us what all we’re seeing. We heard horror stories of all that was going on in there, but we didn’t see any pictures of that. We just heard the stories and we saw these people streaming out of there after awhile. Somebody tells you all this is going on. How many white liberals do you think said, “I don’t believe those people are capable of that?” How much doubt do you think there was on the part of white liberals? No, there was excitement, folks! I am telling you there was glee. There was happiness this was happening, because this allows them to continue to point the finger of racism at Bush and Republicans. “Yeah, they don’t care. Republicans have set this circumstance up. Republicans have kept these people poor. It’s understandable they would be acting this way in the Superdome. Bush has made them this way. The Republicans, conservatives, have made them this way all these years.” 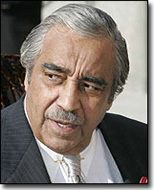 That’s the underlying thought that allows this story to happen. That is the mind-set that allows it to happen. “Oh, yeah, these people are capable of this, but it’s not their fault. They’re frustrated after 60 years of being ignored, 60 years of being forgotten, 60 years of being discriminated against, and it’s all the Republicans’ fault. Who can blame them for acting this way?” That’s the mind-set. That is the template that white elitist liberals have when they hear that this is going on, even though they haven’t seen it. They’ve got no proof, have no pictures, but they believed it. You have to ask why. You have to ask why — and I just did, and I’ll tell you now you’ve got Rangel out there furthering all this, and yet it didn’t happen, Chuck. There were no Bull Connor tactics being used in New Orleans, and of course the white liberals will look around and they’ll believe all these stories because, yeah, the Republicans have led these people to this life of frustration and dismal gloom and doom. Well, the Democrats have been running this state 60 years. The Democrats been running that city for just as long, so I don’t know where the curiosity is. Yes, I do. There isn’t any. There isn’t any curiosity at all. So…
“A spokeswoman for the Democratic National Committee, Amaya Smith, responded: ‘I think the bigger issue here that the RNC is not addressing is that the president and his administration – that their policies made life harder for African-Americans. And not just African-Americans, but working Americans around the country as well.’ When asked whether the [Democratic National] committee repudiated Mr. Rangel’s comments or stood by them, Ms. Smith declined to comment, referring the Sun to her previous statement.” Well, this previous statement kind of proves what I just said. “The bigger issue here is the RNC is not addressing that the president and his administration and their policies have made life harder for African-Americans.” So you see what they did? Whatever it was that they did that we know now they didn’t do, but whatever it was they did at the Superdome and the convention center, it’s President Bush’s fault. Their policies have driven them to this, folks. It’s the underlying theory, and so the DNC refuses to repudiate Rangel. You tell me these people are not cracking up? You think they’re not imploding? “Support for Mr. Rangel’s comparison was explicit among Democratic leaders in New York City as the party’s nominee for mayor, Fernando Ferrer, weighed in. ‘George W. Bush and the conservative Republican policies he champions have consistently hurt working people throughout our country and our city.’ Rev. Sharpton, also supported Mr. Rangel’s Bush-as-Connor comparison. ‘I think that the statement clearly says that if there is a person that is a symbol that many blacks organize around and organize against in this generation, it would be Bush – as it was with one generation and Connor,’ Rev. Sharpton said. “In that sense I agree with him,’ he said of Mr. Rangel. ‘Clearly Bush has become that, especially after Katrina,’ Rev. Sharpton said. ‘We’ve gone from fire hoses to levees.'”
How’s your radio show doing, Al? You got any listeners? You got any stations with garbage like this? “We’ve gone from fire hoses to levees”? What do we know about the levies? We know that the corrupt Louisiana government down there took all this federal money. Bush gave more than Clinton gave and it never got to the levees.
END TRANSCRIPT