Feelings Have Nothing To Do With The Constitution

RUSH: I want to give you an illustration. I have a comment from last night on CNN, Lou Dobbs Tonight. Jeffrey Toobin, who is the legal — I’ll say the senior legal analyst for CNN — was talking about the oral arguments at the Supreme Court yesterday in the assisted suicide death activist case, and Lou Dobbs’ question to Jeffrey Toobin was this: “Was it your sense as you watched these oral arguments there was a broad sense of humanity? We know that Justice Roberts is also deeply religious. The personal convictions and the emotions, the humanity involved here, was it evident on the part of the justices?”
TOOBIN: Absolutely. Remember, Ruth Bader Ginsburg has had cancer. John Paul Stevens has had cancer. Stephen Breyer’s wife is a psychologist who counsels cancer patients for a living. So this is something that is not abstract to them, and I think they will deal with this with considerable sensitivity though I would guess that the Oregon law will probably fall compared to the federal rights law. 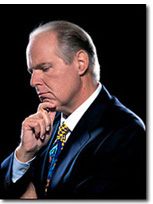 RUSH: Toobin may be right about that, but that’s not the point that I wanted to make or the question I wanted to ask you. You know what? I’ll bet you. I seldom wager on the outcome of Supreme Court cases, but if I had to wager on this one, I would say that the justices of this court are not going to weaken federal drug laws and are going to strike the Oregon law down. The federal drug laws are hugely important to the federal government, and since drugs are involved in the assisted suicide, doctor-assisted suicide, I’ll bet you it’s on that basis — partially, at least — that the Supreme Court strikes this down, but that’s not the point. The point is this: It is irrelevant whether any of the justices have personal connections to cancer, which is a terminal disease, and that somehow that should have something to do with how they rule on the case. But I’ll guarantee you, having said that, there are people in this audience — and you know who you are — you cannot believe I would be that insensitive. You can’t believe that I would say that.
“Why, Rush, come on! They can’t take their practical, real-life experiences in there and use that sensitivity to understand the plight of the people of Oregon and why they voted this way?”
They’re not supposed to. Go ask any reputable lawyer, trial lawyer, whatever, anybody. Ask a judge. Ask them if emotion plays a role in the decision-making, in the deciding of cases.
“Rush, well, Rush, in a murder case they let the victim’s family come in at sentencing and they unload at the conviction.”
Yeah, after . The emotion of all this is not supposed to be a factor. Whether or not any of these justices on the court have a personal connection to terminal diseases, themselves, their families, or what have you, is irrelevant to ruling on the law. That is the point, and that’s why I wanted to play this, because it’s an exercise in illustrating what I have to say about the whole role of the court. It’s not supposed to identity people and then rule on the basis of somebody’s emotion, sensitivity or feelings. It’s strictly a case of law here, and it’s a tough question, by the way. The people of Oregon have voted twice by large margins for this, and here comes the federal government, the Supreme Court, going to rule on whether or not they can. This is a really, really tough question. But whether or not there’s sensitivity because there’s a direct connection to what’s being discussed is not supposed to matter. In fact, in most cases it would lead to recusal, if you want to know the truth.
END TRANSCRIPT