RUSH: Bill in North Brunswick, New Jersey, welcome to the EIB Network. Great to have you. You are up first today. 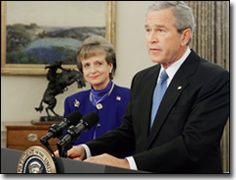 CALLER: Good afternoon, Rush. I have to say that I think the response of some of the big-name conservatives, Kristol, Podhoretz, Krauthammer and even you to an extent has been reflexively negative on this nomination. I’ve been a conservative for over 40 years, and I was inclined to at least give the president the benefit of the doubt through the first couple of days, perhaps through the hearings. You know, I think the behavior of conservatives in this matter makes them look more like a special interest group than like a popular, patriotic movement. It was reflexive, it was automatic, without even knowing anything about this woman, and conservatives care about the individual. You know, we don’t make our judgments based on broad painted pictures. We look at the individual. This woman didn’t get that chance.
RUSH: Well, look there’s a lot you said there. The only thing I want to object to is that my reaction was reflexive. I don’t know about anybody else’s, but mine was not reflexive. I was not just having a reflex here that was based on knee-jerk reactions. Now, I can’t speak for the others. I don’t talk to them and I don’t consult with them. See, I think for every person you mention — I have my own theory for all these people. (interruption) What, Mr. Snerdley? What? What? (interruption) Well, look, the point of this… I don’t want to go through all this again. I’m blue in the face explaining my opposition. You have either not understood me when I’ve said it, Bill, or you’ve not listened and heard me say it. That’s not the point now. I registered it. I don’t have an agenda. I’m not trying to get the woman withdrawn. I’m not trying to affect the outcome of this. I’m just telling you what you think about it, and it was disappointing for a whole host of reasons. The opportunity missed; the fact that it has emboldened the Democrats because it looks like it came from a position of weakness. But, you know, the idea that the conservatives inside the Beltway are some sort of special interest group, you know, you haven’t mentioned anybody other than me that has direct contact with the voting base of this party. So I can’t speculate. Well, I could speculate on other people’s reasons for opposing, and I think in many cases they’re personal. See, I think, if you want me to stir this pot even further, let me stir the pot further.

I think that there are a tremendous number of conservatives who think they do carry a lot of weight in this administration. I think they think that whatever they write, whatever they speak, whatever they say, I think that they think that they influence the administration. What this decision said to them was, “You don’t matter to us,” and they’re taking it personally in other words. Some of these people are simply taking this personally because it’s a rejection of their thoughts, their intellect, their advice, or what have you. Well, that’s not me. I don’t take these things personally because I don’t live under any illusion the White House does anything I want them to do. I have no illusions. You people are my audience, not the White House. So I’m honest with you about what I think, but I’m not being reflexive about this or anything else, nor am I joining forces. I am certainly not an elitist or any of that. But, look, I don’t want to start repeating all this. As I say, go to my website. You can find out what I’ve said about this. It’s crystal clear. I’ve taken three or four days to explain this. I’ve dealt with the “just trust me” issue that the president asks. I’ve dealt with everything — the conservative, the individual, and so forth. I’ve dealt with all that, but I want to move on because this nomination and the fight has spawned something, folks, that I’m trying to clue you in, those of you that haven’t sensed it yet, what it has triggered — and what it has triggered is a big push-back in the conservative movement.
Let me stir the pot a little further. For five years we’ve had a great president when it comes to the war, when it comes to tax cuts, when it comes to a number of things. But there are a lot of things that as you know we’ve been scratching our heads about; nothing on immigration, campaign finance reform, letting Ted Kennedy write the education bill. All of the federal spending, doing whatever we can after the hurricane to send the message, “We’ll do whatever it takes,” meaning spend whatever it takes to keep you happy. Now, during all of this, there are some — and, by the way, let me remind you that during all this I have fielded phone calls from many of you who have been complaining royally. You know who you are. You know you haven’t liked it. But there are two things that have kept all of us steadfastly unified behind George W. Bush, the war on terror and the fact that we cannot let the left in this country gain control of national security. That’s number one, and that’s paramount. Number two: the left in general, outside of national security, they’re still kooky, and they’re mean-spirited, and they are extreme, and they are attempting to mischaracterize us and an attack on the president is an attack on us. An attack on Bill Bennett is an attack on all of us. An attack on DeLay is an attack on all of us, and we’re not going to sit here and put up with it. We’re not going to eat our own in the process. Well, we’re now reaching the midpoint. We’ve got about a year to go to reach the midpoint, 2006 elections, and people run for office in elections, and there are a lot of conservative Republicans who want to run for election and reelection, and they’re going to have a tough time running on the last five years of immigration, the last five years of education spending, the last five years of total federal spending.
They can’t run out there and defend campaign finance reform, and so the agenda or the list of achievements that come from this administration when compared to what conservatives would have liked are not things that are defensible. This Harriet Miers thing has just brought it all to a head, folks. The Harriet Miers nomination has just brought it all to a head, and so there’s a kick-back or a push-back taking place now among conservatives who have for five years been back and steadfast and strong in defending the president because of the two

things I cited. But the president’s not running for reelection again. He can’t, and I’m going to tell you what: If you think it’s bad now, wait ’til you see all the Republicans who purposely start distancing themselves from him. You’re going to see Republicans who will not want George Bush coming in to campaign for them in their local districts because they’re going to be talking a pedal-to-the-metal conservative agenda, and it’s going to be tough to sell that with nothing on immigration reform and campaign finance reform. You know all these issues. I’m not saying the loyalty is gone; I’m saying life goes on, and if you couple this with the fact that the left, throughout all of this, all they needed was a couple of nails hammered in the coffin, a couple of nails and we could bury the coffin. I mean, they’re still going to be around as vampires, come out at night. We’re never going to get rid of all of them.
I’ve got a piece in the stack today by George Lakoff who has been dumped, by the way, by the Democrats, but he’s got a piece talking again how accurately the conservatives frame arguments in a post-disaster era like Katrina and how badly the Democrats do it. I can’t wait to share this with you because he gets us exactly right, even though he thinks we’re lying. He gets the Democrats exactly right even though he thinks they ought to be doing more. What he doesn’t understand is they can’t do more. You’ll understand it when I get to it. Meaning by more, since all they’re doing is attacking Bush, they need to get to their deeper core values and explain, like the Republicans do after a disaster, why conservatism is better than statism and rebuilding the city of New Orleans, the state of Louisiana and Mississippi. Democrats are only saying “Bush wasn’t there, Bush didn’t care, Bush blew up the levees. ” Lakoff says, “They’ve got to get more to their core.” Well, they can’t! Nobody will vote for them if they do that. They’re back to the same old trouble. That’s what’s the frustrating thing to me. These people are weak, they’re disorganized, they have no unity, they’re nothing but hate-filled extremists and activists, and there’s no reason to be defensive or afraid of these people. No reason to go out and accommodate them at all. They wouldn’t do it for us, and they haven’t done it for us.
“Rush, you sound like you’re not in favor of national unity.”
Yes, I am. I’m in favor of 80% of the country agreeing with me. That’s unity. You’re never going to have a hundred percent.
BREAK TRANSCRIPT
RUSH: One more thing on this business that my reaction to Harriet Miers was “reflexive.” I had a caller a moment ago, the last caller that made this point, Bill in North Brunswick, New Jersey. Now, Bill, I love you being out there. I love you being in the audience, but fact of the matter is — and if you’re a regular listener to this program, you know we talk about the court in great detail on this program and have for decades, for years. We’ve been — conservatives have been — thinking deeply about the Supreme Court for 30, 40 years. This is one of the reasons it has been so important to get the Senate as the Republican majority and elect a conservative president, folks, because of what the court has become. You’ve heard me just go on and on and on about this, and since Harriet Miers’ nomination, nothing about the information we’ve received has changed. There hasn’t been anything new. If you ask me, the reflexive reaction is to take “trust me” as the last word. That’s being reflexive. (interruption) Who said that? The caller? Well, yeah, he wants to hear her first. The caller wants to hear her first and decide for himself, but… Well, you’re causing me here to go back, and I don’t want to repeat because it’s all on the website. There’s a reason it’s there, so I don’t want to have to repeat this stuff day after day after day because I’ve done it for four straight days.
END TRANSCRIPT