RUSH: We have set the stage for you how the left-wing media, particularly cable TV, has Rove indicted and in jail; Cheney indicted and resigned. This reaches all the way to the top. This is not even about leaks. knows that Washington has leaks. It’s not about that! This is about the criminality of the whole Iraq war. Patrick Fitzgerald he’s going to get to the bottom of this, and it’s going to upset this White House, and Bush is going to be running this White House by himself. We can’t wait to nail Bush. We hate Bush. We don’t like Bush whatsoever. We’re going to get all these people, blah, blah, blah, blah, blah. Well, also today the Saddam Hussein trial started, and it’s amazing to contrast the media coverage of a Saddam trial, who is a mass murderer, a man who’s used poison gas and weapons of mass destruction on his own population, a man who had rape rooms and torture rooms, did not allow women any kinds of human rights or civil rights — very few men had them in Iraq, either — and yet when you listen to the coverage of his trial today, you would think that this guy is unjust like accused. You would think that he’s brave and courageous. Let’s give you some samples. Christiane Amanpour, during live coverage of Saddam Hussein’s trial, a portion of her report this morning. 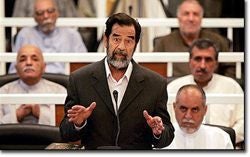 AMANPOUR: And it was an moment of him and his fellow defendants greeting each other. He was smiling. He looked quite jovial. The defense attorneys crowded ’round, some of them lifting their hand in sort of a greeting-cum-salute. One of the defendants who in fact we had seen shuffle in old looking and tired and handcuffed, ’90 years old, suddenly seemed to draw new life and was waving his hands around and looked like he was making some kind of supportive speech to Saddam or some kind of denouncement of this trial. We couldn’t tell but we could see the body language. Saddam smiling and pointing to somebody, making a gesture that this somebody had grown a mustache.
RUSH: All right, this is a great report on a break in the action at the Saddam trial. It’s all back slapping and saluting for Saddam and his thugs. It’s like a high school reunion! The guys are all getting back together again. These are mass murderers! Here is Christiane’s report on the “scuffle” that occurred. You know, Saddam got into a little scuffle there as they were dragging him out of the courtroom, and she portrays this as a big n for Saddam in court today.

AMANPOUR: Then Saddam was to leave the court and as he was trying to leave he had to be unlocked from that row of chairs that he’s surrounded in. You know, there’s white metal like a cage around him. He was unlocked from that, allowed out, and then two or three of the Iraqi guards tried to grab his arms and walk him out. For a period of about 30 seconds, he essentially stared them down. He pulled back his arm and basically said — you could see his body language and his hands — telling them to back off. It wasn’t violent. It wasn’t loud; it wasn’t noisy, and it wasn’t with much gesticulation, but he And he walked out with them on either side rather than them handling him!
RUSH: So Saddam asserted himself like the man that he is, and he refused to let these Iraqi guards manhandle him! And then Christiane prattles on about how poor old Saddam is reuniting with old friends, his old butchers and mass murderers.
AMANPOUR: No, I think the both are true. He did come in looking fairly, I think, slower, more shuffly than when I saw him come into his initial hearing in the summer of 2004. He looked more tired. He looks slightly more bent and slightly more shuffly. He’s an elderly man — not that old! But he looks older than his years. But the — the smiling in that off-camera moment was more reuniting with old allies and friends, and we believe that he may not have seen them up until now. We believe — we are trying to get that confirmed — that he has not had the opportunity to intermingle with others — others on the most-wanted list who have been arrested or other of his codefendants.
RUSH: Uh… All this sympathy for Saddam Hussein. All this understanding. What a wonderful day for Saddam, on trial, and yet he’s reunited with his old butchers and thugs — uh, allies — and it’s such a wonderful day in the neighborhood, and it was so wonderful to see Saddam looking so well, and acting so brave. Contrast this with who Saddam is, and how the members of the Bush administration who have testified before the grand jury in this CIA case are being treated by the mainstream press. But here is the pi?ce de r?sistance. 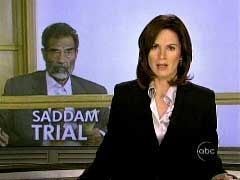 Elizabeth Vargas, ABC’s World News Tonight last night reporting on the trial of Saddam Hussein. Now keep in mind the media has already Karl Rove, “Scooter” Libby and Dick Cheney, along with Tom DeLay. Here’s Vargas’ report.
VARGAS: Saddam Hussein will go on trial for the first time tomorrow, 22 months after he was dragged from an underground bunker. Many Iraqis are eager to see him in the docks, finally held accountable for the atrocities committed by his regime, but already human rights groups are worried about the fairness of the trial.
RUSH: Oh, yes, and so are we at ABC, and so are we at CNN and so are we at NBC and so are we at CBS! “Will Saddam get a fair trial?” seems to be the overriding question. Will Saddam, a butcher, a murderer, a thug, get a fair trial? — and yet (angrily),
The side-by-side comparison is striking, is it not?
END TRANSCRIPT