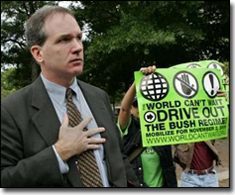 RUSH: There’s an interesting New York Times story today. Yeah. You know, there’s two different ways to look at this. Now, the New York Times story is by David Johnston. The headline: “Cover-Up Issue Seen as Focus in Leak Inquiry — As he weighs whether to bring criminal charges in the C.I.A. leak case, Patrick J. Fitzgerald, the special counsel, is focusing on whether Karl Rove and [“Scooter” Libby] sought to conceal their actions and mislead prosecutors, lawyers involved in the case said Thursday.” Now, somebody’s leaking. To get this specific, somebody, somewhere is talking. Now, we know that. “Among the charges that Mr. Fitzgerald is considering are perjury, obstruction of justice and false statement – counts that suggest the prosecutor may believe the evidence…shows that the two White House aides sought to cover up their actions. Mr. Rove and Mr. Libby have been advised that they may be in serious legal jeopardy, the lawyers said, but only this week has Mr. Fitzgerald begun to narrow the possible charges. The prosecutor has said he will not make up his mind about any charges until next week… With the term of the grand jury expiring in one week, though, some lawyers in the case said they were persuaded that Mr. Fitzgerald had all but made up his mind to seek indictments. None of the lawyers would speak on the record, citing the prosecutor’s requests not to talk about the case.” Yet they are doing so anyway.
Now, okay. This story basically says that it’s the cover-up issue that has been the focus of this investigation. Is there another way of saying that? Is there another way of characterizing what’s happened here, ladies and gentlemen? If you say that the prosecutor is looking at the cover-up, obstruction of justice, could you then not conclude that the prosecutor has concluded there was no original crime here? Now, what is it that the press has had its underwear in a wad about for two years? The press has had its underwear in a wad for two years over the fact that some scalawag, some low-rent scum in the White House, Karl Rove or whoever, actually had the audacity to give up the status and the name of an undercover CIA agent and expose her to great danger. That’s been the focus. Two things. Number one: That didn’t happen, and number two: Since when did the press start caring about the CIA? Since when did liberals start caring about CIA agents? In my lifetime, the left has hated the CIA. They’ve despised the CIA. The CIA = Nixon, and E. Howard Hunt and the CIA murdered innocent dictators. The CIA was a rogue agency. We had to stop it, and so the Frank Church Commission came along and did it. Well, another way of looking at this — this is why I love my buddies at NewsMax. Headline: “New York Times: Karl Rove, Lewis Libby Likely Cleared on Leakgate Charges.” That’s the way to look at it. There is no evidence, and probably — as we have all suspected because Victoria Toensing, who wrote the law, told us — there wasn’t a crime committed here. So what’s happened here is something that, folks, I have to tell you. It’s the Martha Stewart syndrome.
What happens is you have a suspected crime. You investigate whether the crime took place. You find that that crime didn’t take place but in the course or process of your investigation, you think crimes have occurred. So we have a process crime here. We have no crime apparently on what this whole thing was about in the first place, but in the process we think we’ve uncovered criminal activity as part of our investigation — and so that’s what the New York Times story is all about. That’s what Newt Gingrich was warning about the other night on Hannity &amp; Colmes on the FOX News channel. You know, it’s one thing, but if we’re going to start dragging people in over two years’ time and having them appear four hours at a time and then we’re going to say at some point (making sound) that doesn’t square with what you said 18 months ago; and you don’t get your lawyer in there, and you have no advocate in there, and it’s not a due process circumstance in there, and then they can say, “Well, you lied. Well, you covered up. Well, you obstructed justice.” There was no crime in the first place. Now, I know that the Starr investigation started with Whitewater and ended up with Lewinsky, but we knew that there were nefarious activities in both places. You know, the Watergate syndrome was a cover-up syndrome. See, there’s a pattern here. There’s a pattern. All these initial allegations turn out to be… ‘eh. “To really nail these people, I’m going to get them in the process. (Laughter) We can get in them in here so confused. We can say, ‘Scooter Libby said that, Mr. Rove. What do you say to that?'” 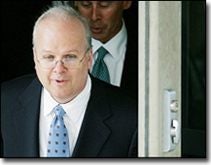