The Sound You Hear Is Democrat Fear 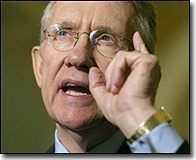 RUSH: Listen to some Democrats on this. First, Dingy Harry this morning on the floor of the United States Senate. And what you are hearing, make no mistake about this, what you are hearing is fear.
DINGY HARRY: The radical right wing of the Republican Party drove this woman’s nomination right out of town. Apparently Ms. Miers didn’t satisfy those who want to pack the Supreme Court with ridged ideologies. The only voices heard in this process were the far right. Her credentials, which are excellent, weren’t good enough for the right wing. They wanted a nominee with a proven record of supporting their skewed goals. So, Mr. President, I hope our president, the president of the United States, in choosing a replacement for his lawyer — and that’s what she is — won’t reward the bad behavior of this right-wing base.
RUSH: They are quaking in their boots over the so-called power of the right-wing base, folks. And it is the right-wing base. It’s not the extreme right wing; it is the Republican Party base that reared up on this and did demonstrate its power. It was not a show of force for the sole purpose of expressing power. It was oriented in principle and purpose. But yet the demonstration of that power was there and no less than the legal analyst at CNN, Jeffrey Toobin today, made that analysis, made that observation. This shows you how powerful the conservative movement in this country is. Make no mistake, Dingy Harry can sit here and try to once again, as they’ve been doing for 30 or 40 or 50 years, characterize conservatives as the extreme right wing, but it is the mainstream of this country and it is why his party does not and cannot win national elections. And he knows it. He’s trying to do the only thing they can do, which is impugn, besmirch, and discredit his opposition, because they don’t dare advance an agenda of their own. Here is Senator Kennedy today on the Late Edition of the Today Show on NBC. Katie Couric said to him, “You talk about a litmus test, but don’t many of the Democrats who would be confirming Harriet Miers have their own litmus test?”
KENNEDY: I’m against any litmus tests.
RUSH: Right.
KENNEDY: We have seen an extraordinary march to progress —
RUSH: Yeah.
KENNEDY: — over a period of the last 50 years.
RUSH: Yes, yes, yes.

KENNEDY: And I think many of us on our side of the aisle don’t want to go back. We want to continue this march for progress and the progress that we’ve made.
RUSH: Yes, yes.
KENNEDY: What we’re talking about now —
RUSH: Yes. 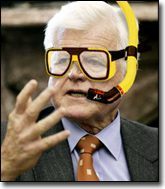 KENNEDY: — is a litmus test by the Republicans —
RUSH: Yes.
KENNEDY: — and we’re talking about sort of the extreme wing —
RUSH: Yes.
KENNEDY: — of the president’s own party that really brought this nominee down.
RUSH: So they’ve got their talking points faxed out. This is extreme right wing of the president’s party, I’m against the litmus test. Let me go on record: I’m all for litmus tests. I’m going to announce a litmus test. And I’m all for packing the court. Damn right. See my hand up, those of you watching the Dittocam? This is what do you when you go to school, when you want to be called on, or when you’re being asked to agree or disagree with something. My hand’s up, we want to pack the court, and we do have litmus tests. I want this court packed with constitutionalists and originalists, and that’s my litmus test as well. Because that’s what the founders intended, folks. It’s quite simple. Quick time-out. Well, no, let me grab a phone call here before — get your finger away from the button in there, Alttmont. My mistake. Tess in Cincinnati. Welcome to the program. Nice to have you with us.
CALLER: Hi, Rush. Thanks for taking my call.
RUSH: You bet.
CALLER: Hey, you know, I would remind those liberals that our Founding Fathers intended the power to rest with the majority. And we spoke. This is not about not trusting the president, not even about Harriet Miers. It’s about we, the people who went door-to-door, phone banks, signs, all this, reminding the president of the agenda upon which he ran. And I am, for one, ecstatic.
RUSH: Good. And I think there are more and more people out there like you than anybody cares to admit today, but you shall be heard.
BREAK TRANSCRIPT

RUSH: All right, Linda in Camdenton, Missouri, welcome to the EIB Network. Hi.
CALLER: Thank you. I can’t believe I got through.
RUSH: Here you are.
CALLER: I’m not as excited as you are because I think everybody is ignoring the elephant in the room. I would love to see Mr. Bush nominate a flat-out conservative.
RUSH: Yes.
CALLER: But he’s going to have to contend with John McCain and his gang of 14. 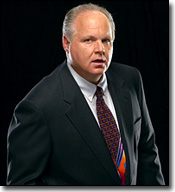 RUSH: Yes, and it’s time to bury them, too.
CALLER: I don’t have any confidence we’d win that fight.
RUSH: Well, I do. It’s time to bury them, too. It’s time to get this nuclear option triggered. It’s exactly the point, Linda. It’s not McCain that’s the elephant in the room. It’s the nuclear option. That’s still the elephant in the room because this gang of 14 nitwits prevented it from being used. It needs to be triggered and dealt with and voted down and been done away with it. Now, look, folks, I understand having trepidations out there, but that’s not how we advance. Let’s not assume problems that we don’t know to exist yet. We might be able to derail a lot of problems simply with attitude, with confidence, with energy. If they still want to try to put roadblocks in the way we just drive through them, like Bruce Willis in one of those Die Hard movies. If they can do it in the movies, we can do it in politics. No, I’m serious. That’s what this is all about. It’s time to deal with some of this stuff. Educate the American people about the bastardization of the whole judicial process. Let’s get on with it!
END TRANSCRIPT