This Is What We Want: Bring It On, Liberals 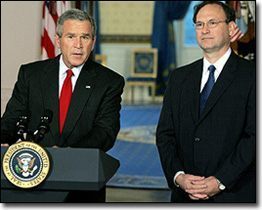 RUSH: Sam Alito, now nominated as the next associate justice of the Supreme Court. He’s been on the Circuit Court for 15 years. He has been confirmed unanimously twice, 100 votes, in two separate Senate votes. He has more experience than any Supreme Court nominee in 70 years. Even Specter likes him. He’s in the Third Circuit, which is in Philadelphia. The Third Circuit covers part of Pennsylvania. Now, I don’t want to hear any whining or moaning about what the Democrats are saying. I don’t want to hear about how unfair they are. I don’t want to hear about how they’re mischaracterizing. I don’t want to hear how they’re impugning him. I don’t want to hear it. They’re going to say it; what I’m telling you is I don’t want to hear any complaints about it, because, my friends, this is what we wanted. This is what we wanted. We want the Democrats to be who they are. The president’s made a great pick here. Chuck Schumer, we need to give him his full-time, 24/7 cable service called the All Schumer Service, or ASS. Let Chuck Schumer be out there all the time saying what he’s saying, let Ted Kennedy, the swimmer, come up for air and say what he wants to say. Let Dingy Harry say it. Let them all talk about it. Let McCain sit on the fence all he wants. Let them all. I’m telling you this is exactly what we want.
We want the libs to be who they are. We want a debate about the Constitution. We want a debate about the role of the judiciary in our society. We want such a debate that the American people are listening to it. We want this debate to be informative, we want this debate to be educational because we will win this debate. This is a huge pick, it’s a fabulous pick. It will go a long way toward setting the standard for future nominees to the US Supreme Court. It will go a long way toward establishing the role of the Supreme Court in American life, and hopefully returning it to its original intent by the Founding Fathers. Watching the media panic: bring more of that on! I’ve got notes from people: “I can’t believe they’re calling him ‘Scalito’.” Let them call him Scalito. All they’re doing by calling him that is trying to impugn him. They’re trying to say he’s nothing more than a little stepchild of Antonin Scalia. He’s a mini-Satan; he’s a mini-devil. They’re trying to deny that he is his own man and so forth. Let ’em try, folks. This guy’s got a record. He’s got 15 years and two 100-zip votes confirmation by the US Senate to sit on the federal bench. Here’s the president’s announcement today, came early this morning. Here’s what he had to say.
THE PRESIDENT: Judge Alito’s nomination received bipartisan support and he was again confirmed by unanimous consent by the United States Senate. Judge Alito has served with distinction on that court for 15 years and now has more prior judicial experience than any Supreme Court nominee in more than 70 years. Judge Alito’s reputation has only grown over the span of his service.
RUSH: Yeah.
THE PRESIDENT: He has participated in thousands of appeals —
RUSH: Yeah.
THE PRESIDENT: — and authored hundreds of opinions.
RUSH: Right on.
THE PRESIDENT: His record reveals a thoughtful judge who considers the legal merits carefully and applies the law in a principled fashion.
RUSH: Right on.
THE PRESIDENT: He has a deep understanding of the proper role of judges in our society. He understands that judges are to interpret the laws, not to impose their preferences or priorities on the people.
RUSH: Hubba hubba hubba. Here’s Judge Alito himself, a portion of his remarks after the president introduced him this morning.

JUDGE ALITO: Every time that I have entered the courtroom during the past 15 years, I have been mindful of the solemn responsibility that goes with service as a federal judge. Federal judges have the duty to interpret the Constitution and the laws faithfully and fairly, to protect the constitutional rights of all Americans, and to do these things with care and with restraint, always keeping in mind the limits and role that the courts play in our constitutional system —
RUSH: Right on!
JUDGE ALITO: — and I pledge to, if confirmed, I will do everything within my power to fulfill that responsibility.
RUSH: Right on! Right on! Right on! Bring it on, baby! Bring it on! These are fighting words to the Democrats. What have we got here is we have a male for Sandra Day O’Connor’s seat. This is supposedly a “swing vote.” Schumer is all upset. “It’s a swing vote.” This is fabulous. We’ve got a male. We have a married male. He’s European. He is anathema to the libs on this, folks. He is anathema to them. The exact opposite of what they were hoping for, and this is fabulous. Now, listen to this. This is even better news from the American Spectator’s blog. “After three hours of serious and patient consideration of Samuel A. Alito’s qualifications and judicial temperament, the N[AGs] are taking to the streets. The National Association of [Gals] is taking to the streets. The NAGs are protesting outside the Supreme Court building at four o’clock today.” Isn’t the Supreme Court the wrong building? He’s not there yet. Perhaps their choice of venue to vent reveals the NAGs’ resignation that Judge Alito’s confirmation is a fait accompli.” That’s already been posted at the American Spectator’s blog. So bring it on. The NAGs are gonna show up at four o’clock. Burn the bras, ladies, and go get Maureen Dowd out there with you, because you’ve destroyed her life, too. Did you read that piece that she wrote in the New York Times? (Hissing.) Anybody have a pet cat? Have you heard that? When your cat gets upset, what does it do? It hisses. (Hissing.)

Oh, baby! She hates men! She’s up at the feminist movement for destroying the life of women because she followed their rotes back in the late sixties and early seventies. It’s a long piece. It’s too long to read. I’m not going to read it. It’s too long. I mean, it is an essay. It’s in the New York Times magazine, I think, and I don’t have time for excerpts. We’ve already covered it. We’ve covered Maureen. She’s got this book out. I think it’s adapted from the book, but she’s clearly a wounded dove, a wounded angel. Maureen Dowd just can’t get over it, and so put her on the march with the NAGs. This is fabulous. The NAGs are going to come out, the NARAL babes are going to be demanding that these liberal Democrat Senators on the judiciary committee follow their lingo. This is exactly what we wanted when we got Harriet Miers. This is it. Do you understand? We’re ready for this debate. We can win this debate. We’re up against a bunch of people that don’t have any ideas. We’re up against a bunch of people that can’t be honest about who they are, but they care so much about this court they have no choice but than to be honest about who they are. They will not be honest in a campaign. They will not be honest when they’re running for office. But when you put somebody up on the court that’s going to threaten their control over it, they’ve got no choice, and they’re going to bring the NAGs out, every pervert, oddball group in this country is going to be on parade opposing this guy who basically is such a normal, down-to-earth guy he’s a little geeky! I mean, this guy poses no threat to anybody. He’s just an ordinary nice guy. He’s studied the law; he’s made it his life. So I want these people to go bananas. Here’s an example of the media going bananas today. This is a little montage we’ve put together. We’ve got Diane Sawyer, Matt Lauer, Jessica Yellin (she’s with ABC), David Gregory, Kelly O’Donnell from NBC, George Stephanopoulos from ABC, Thalia Assuras, (she’s from CBS), and Gloria Borger, (I guess she’s at US News) reacting to Judge Alito’s appointment:

SAWYER: They’ve called him “Scalito,” and he is actually nicknamed “Scalito” because his opinions mirror those of Justice Scalia.
LAUER: He is so conservative he’s been called “Scalito,” a comparison to Supreme Court Justice Antonin Scalia.
YELLIN: He’s sometimes nicknamed “Scalito.”
GREGORY: This guy is in the mold of Antonin Scalia. That’s why he’s called “Scalito.”
O’DONNELL: He is a “Scalito-light.” He has been described by some as in the mold of Antonin Scalia.
STEPHANOPOULOS: He’s a morph of Antonin Scalia. He thinks like Scalia.
ASSURAS: He’s modeled himself after Justice Antonin Scalia, has been given the nickname of “Scalito.”
BORGER: He may be called “Scalito” because he’s quite conservative, but he is not bombastic like Justice “Scalito.”
RUSH: All right, so the talking points went out. The fax went out. They all got it and it’s just a montage identical to the one when they said that Bush didn’t have gravitas or whatever that was about. Dick Cheney gave him “gravitas,” whatever. You remember that montage we played for you, and it just illustrates the point, no matter where you go in the mainstream press you’re going to get the same story. It doesn’t matter who the reporter is. It doesn’t matter what the network is, you’re going to get the same story: Scalito. I’m telling you, all that is, is an attempt to impugn him. Now, there’s also a little bit of upset in the media that Alito is not a woman. He’s just another “guy.” Another montage here from Linda Douglass of ABC, Soledad O’Brien from CNN, Candy Crowley, CNN, Ed Henry, CNN, Katie Couric of the Today Show, with our own separate montage here.
DOUGLASS: Now there is less diversity than ever on the Supreme Court. This is another white male, not a woman.
O’BRIEN: He is the opposite of Harriet Miers, he’s a guy and not a woman,
CROWLEY: This is a white male replacing a female, leaving just one female on the Court.
HENRY: You hear the word ‘man’ in there, Democrats hitting the gender card.
COURIC: And I guess ideology trumped gender in this case, right?
RUSH: So, fine, bring it on. Let ’em be. Folks, they’re irritated. They’re upset about this, and this court matters so much to them that they’re going to tell everybody who they are. This is fabulous. I don’t want to hear any complaining about what they say. I want to hear thanks. I want to hear gratitude for the left being open and honest for who they are, what they think, and what they think about this particular nominee. I don’t want any calls from anybody talking how unfair or biased the press is. That’s what we want.
END TRANSCRIPT