RUSH: Bellfort, New Jersey. Hello, Tom, you’re next on the EIB Network. Nice to have you with us, sir.
CALLER: Good afternoon, Rush. How are you?
RUSH: Fine. 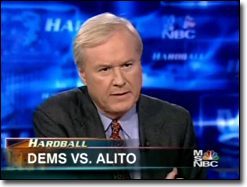 CALLER: Good. I just saw the Chris Matthews talk with Dean last night, and Chris Matthews is blasting Dean about being anti-Italian, the ethnic issue, and Dean was trying to say that he lost — as a prosecutor — he lost some cases. I’m just wondering if you had seen that.
RUSH: Well, we have the audio of this– and I must confess I don’t watch this show. I only hear about it from people who get agitated when they watch this show. I pay people to watch this show. I like a positive outlook on life. If I watched this stuff every night, I’d be as fit to be tied as a lot of other people are. So I don’t watch it. But I have enough here to get an idea what happened. We have the audio sound bites. Howard Dean was on Hardball with Chris Matthews last night. Matthews said, “Somebody in the Democratic Party is putting out an attack sheet on this new justice nominee for the Supreme Court, and the first attack is that he was lenient on the mob back in an ’88 case. He let the Lucchese family get off, said he was an embarrassment to the government. Here’s a guy that’s been tough on crime. Why start off on that issue, Dean?”
DEAN: I didn’t put it out, but somebody did so I’ll be responsible for it.
MATTHEWS: It was put out by the Democrats, but go on.

DEAN: All right. The president put out a sheet this morning, Republican talking points. One of the things he said was that judge Alito was a spectacular prosecutor. Well, it turns out he wasn’t quite so spectacular, and he lost some important cases, and one is which that those guys, in that particular case, those guys all got off, 20 of them without even putting up a defense witness. So at least in that particular case, that’s an example.
RUSH: You notice how wishy-washy these Democrats are on prosecutors? Prosecutor comes along and indicts Scooter Libby, they love! Why, that’s “a prosecutor’s prosecutor.” Now all of a sudden here’s Alito who the Democrats have voted for a hundred to zip twice in the US Senate. He’s a lousy prosecutor! Now they’re going after Alito. “Maybe he’s got mob ties!” That’s the purpose of the document. “Maybe he’s got mob ties. Alito? Scalito? Lucchese? Maybe he let these guys off maybe he didn’t try them; maybe he’s got mob tries.” I mean, let this stuff flow from their lips, folks. Let it just keep flowing. But there’s more to this than meets the eye. Sit tight. Matthews said, “Well, what about the Genovese case, a year later, he won the conviction to put three of those big mob guys away, including the top guy in New Jersey.”
DEAN: I think it’s great. All I’m trying to say is, you know, this guy is not the best prosecutor since sliced bed. Look, here’s —
MATTHEWS: You don’t sense a little ethnic aspect to this? The fact he’s Italian American, they nailed the #1 issue against this guy is mob, that he’s weak on the mob. You don’t see that?
DEAN: No.
MATTHEWS: You don’t see it? I think everybody else does. I see it.
DEAN: I’ll tell you what the #1 issue is.
RUSH: I’ll tell you what the #1 issue is. Matthews says, “Are the Democrats the pro-choice party period? Is that all we got here, is that the only argument we can make, we’re the pro-choice party, is that it?”
MATTHEWS: The Democrats, your party is the pro-choice party?
DEAN: No. My party respects everybody’s views, but my party firmly believes that the government should stay out of people’s personal lives.
MATTHEWS: But you’re a pro-choice party, are you not? You sound like you’re against them for being pro-life. Are you pro-choice? 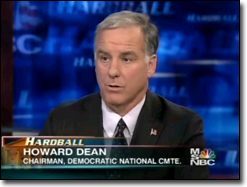 DEAN: I’m not against people for being pro-life. I actually was the first chairman who met for a long time with a pro-life Democrat.
RUSH: Well, I could see why some of you people watching this last night were a little confused here. Democrats don’t get put on the spot this way very often, and of course Dean was mistaken as he can be — or lying, whatever it is. You know damn well… You know, if you want to have fun with a liberal Democrat who claims they’re pro-choice, go up and say, “I am, too.”
“What do you mean you’re pro-choice?” they’ll say to you.
“I choose not to have abortions as often as possible.”
“That’s not pro-choice!”
“Wait a minute. I thought it was the word ‘choice.’ How come only you can be pro-choice? Pro-choice does mean abort, huh?”
“Well, no! No, because… because…”

“Well, look what we have here. Tim Chapman at Town Hall has the entire Democrat document that Chris Matthews called disgusting and which Republican liars from Drudge on down are using as the basis of their claim that Democrats attacked Alito for being Italian-American. Only one problem. Read the so-called disgusting memo, doesn’t say anything like that. Do a search. The word ‘Italian’ isn’t even in it. The whole so-called outrage has been a complete fabrication by Chris Matthews, by Matt Drudge, and by perennially race baiting right. Oh, by all means the memo talks about ‘Scalito,’ a long-held nickname given to Alito by legal friend and foe alike [sic] to describe his far-right Scalia-like views. And, horror of horrors, one point out of 15 talks about a case where a US attorney, Alito, failed to win convictions of 20 mobsters after the longest criminal trial in US history. It doesn’t say anything remotely implying Alito had any connection to the mobsters except prosecuting them and apparently botching the case. So Chris ‘fair game’ Matthews in addition to being the smarmy sack of pundit crap that we always knew he was, flatly made up…” This is a Democrat website, folks, that you’re listening to me read from. “So Chris fair-game Matthews, in addition to being the smarmy sack of pundit crap we always knew he was, flatly made up the part about the Italian American slam in the memo. He lied he put two and to together in his own head came up with mobsters equals Italian equals Alito as his own slam and then sold it as a disgusting Democratic attack. Let the bastard hear about it tomorrow. He fabricated the entire race baiting slam in his own warped head. Ask him why he did it because as an Italian-American I’m interested in hearing that.” It goes on and on and on to slam Matthews. Now, this is from the front page of the Daily Kos, taking vicious shots at Chris Matthews. The New York Times gets a break today. This is the Democrat crackup I am talking about. The left wing doesn’t even like what its media guys do when they try to be fair, and so Matthews, under a bigger assault from his own buddies than probably you have ever subjected him to.
BREAK TRANSCRIPT 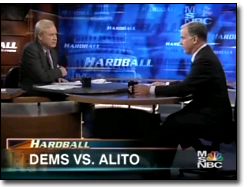 RUSH: Two more bites here with Matthews and Howard Dean, and this is really good, because — and I don’t know what — maybe Matthews is trying to regain some lost credibility after this Valerie Plame cliff that he went over, hoping for Fitzmas last couple weeks, but he continues to just bear down, bore in on Howard Dean on, “Why don’t you just say it? Why won’t you say that your party is pro-choice?”
DEAN: The position we support is a woman has a right to make — and a family has a right to make up their own mind about their health care without government interference.
MATTHEWS: That’s pro-choice.
DEAN: A woman and a family have a right to make up their own minds about health care without government interference, that’s our position.
MATTHEWS: Why do you hesitate on the phrase pro-choice?
DEAN: Because I think it’s often misused. If you’re pro-choice, it implies you’re not pro-life. That’s not true. There are a lot of pro-life Democrats.
RUSH: Yeah. Are they allowed to say so? Name one. I’d like to meet the person. The last one I knew wasn’t allowed to speak at the Democrat convention in ’92, Bob Casey, who was the governor of Pennsylvania. So Matthews still keeps asking him, and he still keeps avoiding the question. So Matthews says, “Well, well, do you believe in abortion rights?”
DEAN: I believe that the government should stay out of personal — the personal lives of families and women.
RUSH: Stop! Stop right there! Stop right there. Stop, stop, stop. Well, then I guess you’re for Social Security reform. The government ought to stay out of the lives? Well, the government is telling people they have to take Social Security, can’t use their own money, can’t have their own savings accounts. What is this, Howard? You see the inconsistency, he doesn’t even want to admit they’re pro-choice even though I’m telling you, run the tests. Go up to a pro-choice woman or pro-choice liberal and tell them you, too, are pro-choice but that you choose life and they’ll tell you, “You are not pro-choice.” Well, that’s another thing, too. H.R. is saying, “I thought this was a winning issue for them. Pro-choice, pro-choice! They ought to be shouting in from the rafters, if the majority of the country is pro-choice. Why is Howard Dean so reluctant to use the term?”
DEAN: — lives, that’s what I believe.
MATTHEWS: I find it interesting that you’ve hesitated to say what the party has always stood for, which is the pro-choice position.
DEAN: The party believes the government does not belong —
MATTHEWS: I’m learning things about hesitancy I didn’t know about before.
RUSH: I’m learning things here about hesitancy I did not know about before. Dean is probably flipping his wig here and is making plans to get even with Matthews as the interview ends. But the party believes the government doesn’t belong in making personal decisions. Can we go down the list here on how many personal decisions the government doesn’t allow you to make without their involvement, from how you use your property, to where you can build your house, to whether you can have your own private Social Security savings account, do I have to keep going? Folks, we have ’em right where we want ’em. We just want ’em to keep talking. They cannot back up their beliefs on substance, and as Dean has just proven, they don’t dare be honest about what they really believe.
END TRANSCRIPT