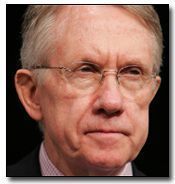 I see it on the screen now. I see it. The Democrats — is just the Democrats or the whole Senate? Okay, okay. Rule 21 has been invoked by the Democrats. The whole Senate is in session behind closed doors. It’s a closed session. Harry Reid invoked Rule 21 to discuss the Libby indictment and to pursue the notion that this prewar intelligence was known to be untrue, that Bush lied. Democrats are unhappy that Fitzgerald did not indict on this basis, so they are going to make it happen. I told you this was going to happen. Folks, it’s uncanny! When are you doubting Thomases going to finally wake up and admit I know what I’m talking about?
After the past two weeks I’ve had, I don’t understand how anybody could ever call here and disagree with me about anything. I predicted this to you. I predicted whether they get the indictment they want or not, they’re going to still proceed on a policy basis as though Bush lied — and now they’ve invoked Rule 21 and they’ve got the Senate in closed session dealing with the notion the investigation, the Libby indictment, and what does it mean for the fact that president lied us into war.
END TRANSCRIPT