RUSH: I want to share with you excerpts from a letter I got today, an e-mail letter…
Dear Mr. Limbaugh,
I can’t even begin to tell you how proud I am knowing that you are behind that microphone and honoring our troops here in the Iraqi theater. Thank you, sir, for your unwavering support for all of our airmen, soldiers, sailors, Marines, and Coast Guardsmen fighting the global war on terror — especially those in the current battle for Iraq that are assigned under my charge. I’m extremely proud of all my troops. I’m also very proud of my coalition brethren who engaged in combat operations here. The list of honorable warriors also includes members of the Iraqi armed forces. Fifteen years ago I never would have imagined having my own boots on the same ground over which I chased Iraqi Air Force MiG fighter jets across the sky in hot pursuit. But times have changed. [So this guy was in the first Gulf War.] We get you live on Camp Liberty radio Baghdad, 98.0FM. I listen to you at eight p.m., Iraq local, each day whenever I can. At that time of the night I may be likely on my way driving back from the Halliburton Kellogg Brown &amp; Root operated chow hall. Friday is usually lobster and steak night and pretty damn good. Driving back from chow, I’ll try not to hit any protected wild dogs or gazelles that run across the road, and I’m not kidding. There are protected wild dogs and gazelles here that we can’t hit.
We don’t care, though. It’s the threat of rocket and mortar attacks that have more of my concern. But we have to have a sense of humor here. Every once in a while something hilarious does happen and my troops and I just bust a gut laughing. And here’s one such story. The most recent chuckle involved launching a dilapidated refrigerator made in France from the catwalk on top of the Baghdad International airport control tower. The control tower stands about 200 feet above ground and the refrigerator reached terminal velocity quickly after leaving the catwalk prior to impacting the ground. It may not sound a bit funny to many people, however, military necessity dictated removal of the refrigerator, made in France, from the tower cab. This necessity arose because of a loud and annoying chronic squeal the French refrigerator made each time it powered itself on. The squeal was often heard as background noise in the radio transmissions made from the tower. At first this background noise was misconstrued by coalition military aircraft and civilian airliners as enemy electric radio jamming countermeasures on our radio frequency. But the noise, coupled with the drain in electric power from the refrigerator made in France, weakened our radio output power transmissions and drowned out our voice.

We considered for two-tenths of a second conducting an in-depth staff study of the apparent noise jamming reports we received, but my senior NCO solved the problem by pulling the electrical plug from the wall connecting the refrigerator made in France. That worked for about a week after which time the same refrigerator made in France began to stink. The sunlight through the tower cab windows somehow turned the inside of the refrigerator into a large yogurt culture. The only course of action we deemed appropriate was to get rid of that refrigerator made in France. Option one involved several flights of stairs, would need to be surmounted downward as we would need to carry the large icebox down the stairs. Option two involved using the building’s elevator, which was also made in France. This was too risky since the elevator only worked when it felt like it, and only between the hours of ten and 1400, and only after much stroking with preventive maintenance technicians. It’s always the belt, the flimsy rubber belts, the motor made in France that rendered the elevator made in France useless to us to move the refrigerator made in France out of the building.
No French technicians were around to fix any of this stuff and we couldn’t read the French placards on any of the machinery. Thus, in order to avoid any lower back spinal disk vertebrae compression fractures, at the time we settled on option three. We launched the refrigerator made in France from the catwalk. It was a decision made out of military necessity. It came crashing down. It hit the sidewalk; exploded wide open. There was also a rather large smelly dust cloud that lingered for quite some time after impact. It attracted some attention but it wasn’t really clear with all the dust what really happened after impact, but after awhile we didn’t pay much attention to any of it. We moved on and we’re still moving on. Now there’s no loud squeal in the control tower radios. The radio transmitter is at full electrical power and the safety of flight for coalition air operations has increased exponentially. None of my comments are intended to imply any political leanings one way or the other. Mr. Limbaugh, war is ugly — and it is, and some refrigerators are ugly. There are things in the hearts of men that are far uglier than war itself, and my troops and I are fighting for those cherished ideals of democracy.
Democracy is our strategic weapon in the global war on terror — and from what I can see from my airmen, Iraqi counterparts, Iraqi families and children, it’s working here in Iraq. I’ll never forget the images of this war. It’s horrible. But we really believe this is worth the fight, and it’s those stupid, priceless moments shared with my troops like the above story, throwing the Made-in-France refrigerator off the catwalk atop the Baghdad Control Tower that I know I will cherish forever. Thank you again for supporting my troops out here in Iraq. I’m honored by your gracious support. I admire your courage and wish you continued success in spreading the message of war fighters fighting for freedom to your audience because that’s what this war is all about. And we will win the battle for Iraq. In fact, we are kicking some ass.
Thanks, Rush, for staying awake through this e-mail.
Mega dittos from Baghdad. May God bless you.
Very respectfully,
Tazz
PS. Enclosed is a picture of all the guys that work in this control tower, the air traffic control section. 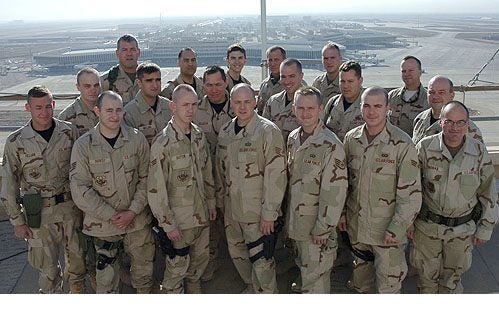