RUSH: John Kerry beginning to undermine the war in a now, in a big way. Let’s go the sound bite. This is Face the Nation yesterday. Bob Schieffer says, “Democrat Senator Joe Lieberman of Connecticut, he takes a very different view, Senator Kerry. He says basically that we should stay the course, because he says real progress is being made. He says, ‘This is a war between 27 million Iraqis who want freedom and 10,000 terrorists.’ He says we’re in a watershed transformation. What about that?”

RUSH: There’s so much… I’m sorry I even have to play this for you, but he’s assumed the position of official Democrat Party spokesman on this. He’s putting himself out there, so we have to deal with it. There’s so much wrong with this. You’ve got to begin to transfer authority to the Iraqis? What’s been going on the last year and a half that he hasn’t noticed, number one. Number two: “After all these 2-1/2 years and all the talk of 210,000 people trained, no excuse for not transferring more of that authority”? What are we in the process of doing? All these people are trying to do is get ahead of something that is already happening so can take credit for it. But this business that US soldiers are terrorizing Iraqi women and children, you now, if you doubted John Kerry during the 2004 presidential campaign, if you doubted anybody, the Swift Boat Vets, if you doubted anybody about him, you shouldn’t now. It is clear what he thinks of the US military. His view is common throughout the Democratic Party. The only Senate Democrat who sounds like FDR or Truman right now, is Joe Lieberman. You’ve got the likes of John Kerry and Dick Durbin now echoed by Harry Reid and Ted Kennedy as the voice of the modern Democratic Party, which the US military and feels no compunction whatsoever to characterize them as terrorists. Let’s go back to April 22, 1971 — and this is Kerry, testifying before the Senate Foreign Relations Committee about his tour in Vietnam. 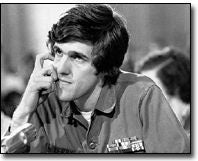 JOHN KERRY: They told the stories of times that they had personally raped, cut off ears, cut off heads, taped wires from portable telephones to human genitals and turned up the power, cut off limbs, blown up bodies, randomly shot at civilians, razed villages in the fashion reminiscent of Jen-giss [sic] Khan, not isolated incidents, but crimes committed on a day-to-day basis with a full awareness of officers at all leveled of command.
RUSH: So he came back and he lied about atrocities that he never saw. He accused men of committing these atrocities. He never saw them. He lumped himself in at some point with having participated in them, but he never saw these things committed. That truth has come out. He has not seen US soldiers terrorize kids and children in the dead of night in Iraq, and yet he can’t help it because this is who he is — and who he is, is a carbon copy of today’s modern Democratic Party. This is how they view the American military man and woman; this is how they view their own country. are the terrorists. brutalize. the barbarians. are cowards. are doing things like this under cover of darkness. It is shocking to have to play this stuff for you, but I feel compelled to do it because so many people still want to have their head in the sands about all this. How much longer do we have to pretend these people are patriots? How much longer do we have to do that, folks? We’ve got Ramsey Clark, John Kerry, Dick Durbin, Ted Kennedy — who, of course, said that our running of Abu Ghraib prison was no different than a change of management. In fact, we’re doing it just as badly and doing just as rotten things as Saddam did. They don’t speak like patriots, folks, and they don’t act like patriots. In this comment, John Kerry is anti-American. He’s trying to get away with making you think he is pro-American and pro-military because we’re in a situation that the president put us all in that’s untenable and it’s not these people’s fault; it’s all Bush’s fault. But make no mistake that’s not how this is heard around the world. This is by our enemies. This is not patriotism. This is not patriot speech. It’s not patriot actions. This is pure anti-American, anti-anti-US military and these are the mouthpieces of the Democratic Party today who are assigned the effort of saying these things: constantly slam our own country, pretending that they’re slamming Bush. And it’s true incidental they hate Bush. There’s no question. But they have to know that they’re pounding our institutions, and the people who support them know it. International Answer, Code Pink, all these other loon, left-wing peace groups are all part of the same organization. They are in our defeat. They are now for our defeat. They are our defeat — and I, for one, find nothing patriotic about it.
BREAK TRANSCRIPT

RUSH: So you’ve got Durbin comparing interrogators and military personnel in uniform to Pol Pot’s thugs, Soviet gulag operators, and Nazi soldiers and so forth — and, of course, all hell descended on Durbin after that. I’m just wondering if this comment by Kerry will cause a similar crescendo. I mean, when he actually has gone out now and repeated what he said in April of 1971. Those were total lies in 1971. He couldn’t substantiate these allegations he was making, and now he comes back and basically accuses young soldiers, American soldiers, of terrorizing Iraqi kids and children and breaking their historical and religious customs, and that there’s no reason for this, and that it must stop. This is clearly agitating for defeat. It’s a disguised attempt here, folks, at ripping Bush. But this is an all-out assault on their own country. These people are not courageous. It doesn’t take any guts for Kerry to go to the Senate floor or to go on Face the Nation in front of a friendly audience and say what he says. They like to think of themselves as courageous, but that term it misused — usually by them to define their opposition to the war.
What these people are doing is not It doesn’t take courage or guts to do what they’re doing at all. It’s the easiest thing in the world. Liberalism is the easiest, most gutless choice anybody can make. Courage is speaking for freedom while faced with tyranny, not speaking for tyranny while living in freedom — and these people are advocating tyranny by

suggesting Saddam shouldn’t have been deposed, maybe we shouldn’t even proceed with this trial, that Iraqis were better off. I mean, these are the people that claim, folks, to have all these interests in human rights and civil rights and freedom and love and tolerance, and they’re willing to consign the Iraqi population back to this thug dictator and all of his evil and all of his horrors — and at the same time they want to be called courageous for doing so! Well, this is the exact opposite of courage. Courage is when you are tyrannized, when you’re living in tyranny, and you dare speak up for your own freedom. These people are living in freedom. They’re protected by it, and they are speaking up for tyranny — and you’ve gotta add Jimmy Carter to this list.
Add Carter, and Bill Clinton as well. Carter in many ways is difficult to distinguish from Ramsey Clark, because Carter is out there currently constantly embracing dictators, from Castro to that pot-bellied little fool in North Korea, Kim Jong Il or Kim Jung Il, Kim Il Jung, whatever they go by. They’re always just out there traveling the world denouncing us. Clinton himself often comes close, but he pulls back. He’ll go over to Dubai and rip the soldiers. He will not call them terrorists, but he’ll demoralize them and attempt to make illegitimate their effort, then he’ll come back and change his mind when he’s speaking to an American audience. I guess he thinks this is courage, too, telling an audience what it wants to hear, even trying to triangulate the war. Then in the meantime, you’ve got Joe Lieberman who is the black sheep of this party because he speaks the truth and defends his country, but he’s totally ignored. He’s an outcast in his own party. Instead, you’ve got people like Cindy Sheehan and John Murtha, praised, because they undermine the war — and in the process, undermine their country. Then you’ve got the media, nothing more than the Democrat National Committee house organ, the Democrat National Committee Times, the Democrat National Committee NBC, the DNC-ABC, and it’s sickening. It is just sickening — and they must pay a price.
BREAK TRANSCRIPT

RUSH: Listen to this again. John Kerry, Face the Nation yesterday. Again, nobody watches this show, and that’s why you may have missed this.
JOHN KERRY: [T]here is no reason, Bob, that young American soldiers need to be going into the homes of Iraqis in the dead of night, terrorizing kids and children, uh-uh-uh, you know, women, breaking sort of the customs of the — of — of — of — historical customs, religious customs, whether you like it or not. Iraqis should be doing that.
RUSH: Now, folks, is it me, or does this man sound like he has dementia? He just blabs away. If you saw the whole appearance, he just blabs away, says whatever enters his mind, regardless of its possible effect on our troops, regardless of whether it makes any sense. As long as he’s being paid attention to, he will pursue hapless effort again at winning the presidency. But it’s totally hapless. Don’t forget, this is the guy — and the reason he does this is because he knows that he’s never going to be scrutinized by the press. That pitiful performance of his outside the White House last week where he contradicted himself inside of six sentences about his policies on troop withdrawal, whether it would work or not work? It was one of the most incoherent convoluted things he said since he said, “I voted for it before I voted against it,” but he’s confident he can get away with this because he knows he’s not going to be scrutinized. Remember, this is the guy when CBS a bunch of the press were running around asking him some questions, he gave this long, winding answer that nobody could make sense of, and CBS said, “Senator, you want to do another take on that? We don’t have a sound bite in there.” Now, rather than air it as rambling incoherence, in vain search of a cogent thought, the media gives him take two, which is what he got — and in this case, he says this; there’s no outrage from Bob Schieffer. There’s not even a raised eyebrow from Bob Schieffer. There’s a, you know, stroke the chin with the hand and give it considerable thought; “Why, senator, you may be on to something, hmmmmm.” It’s just absurd. But at the same time all these people think they’re being courageous! Kerry, I’m sure, thinks this is a great act of courage — just like he thought when he thought April 22nd, 1971, was a great act of courage.
END TRANSCRIPT