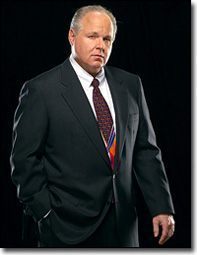 RUSH: So yesterday after the program, I’m sitting here minding my own business, bothering nobody. I’m working feverishly on today’s program, because once this program is over I will start working on tomorrow’s. It’s called show prep. I’m reading some things on the Internet and I notice I’ve got a flash e-mail from one of my — for lack of a better term; I don’t like this term, but I call it — PR persons. “Dear Rush, A Philadelphia news writer wants to know if you will comment on a recent column (see below) by ‘Jerry’ Mondesire in the Philadelphia Sun, 20,000 circulation, a largely black audience. This column is highly critical of Donovan McNabb. The column accuses McNabb of ‘playing the race card.’ This is apparently in reference to McNabb’s decision to have mid-season surgery on his sports hernia, saying publicly that fans ‘expect a black quarterback to be able to scramble,'” and then the reporter’s e-mail address and phone number is left for me. Now, I’m saying, “What does this have to do with me?” So I read the column. I read Jerry Mondesire’s piece, by J. Whyatt Mondesire, in the Philadelphia Sun, and stand by. Here it is. I’ll just give you a couple of excerpts.
“Hey McNabb! Yo — Donny! I’m calling you man. Hey, soup guy, over here! Donovan E. McNabb, you hear me callin’ you. Will you please pay attention? For a whole lot of years now, we’ve heard you crying aloud about being taken seriously as a black quarterback who can camp out in the pocket and deliver rifle shots across midfield right into the fingertips of the fleetest of wideouts and tight ends. Say, like a Doug Williams, the brilliant Grambling star quarterback of a generation ago who went on to break a Super Bowl record for touchdown passes in 1988. Well….well…I’ve seen you Donovan E. McNabb — in your formative years as well as your mid-career development–and one thing is certain. Donovan E. McNabb you’re no Doug Williams. The Grambling all-star completed 18 of 29 passes for 340 yards and four touchdowns, capping it off with 35 points in the fourth quarter alone. He followed that performance with three conference championships in 2000, ?01 and ?02. Your record is another matter entirely. In fact this whole dismal season so far has really been a testament of fallen dreams and lost opportunities most of which belongs at your feet (or should I say hands) and that of your coach, Andy Reid who has allowed you to perpetuate a fraud on the field while hiding behind excuses dripping in make-believe racial stereotypes.”
Now, let me pause here. Can I take you back to what started all of this? What started all of this was an innocent-yet-true comment made by me on ESPN in which I theorized — and how many years ago? What is this, 2005? It’s two years ago now. Two years, so the 2003 season, and the Eagles were not starting off well. It was week four, week five of the season, and I said, “I think quarterback McNabb’s a little overrated.” I even said he’s a good quarterback and the Eagles are lucky to have him. He’s a little overrated by a media who has a social conscience and is hoping that a black quarterback does well. Well, the firestorm that erupted! Oh! It’s still going. (Hey, Brian, would you come put my headpiece back on in? In my exuberance here, I just knocked it off.) So the firestorm that erupted. The media could not believe that I would have the audacity to say something of a racial nature. (Thank you, sir.) That I would have the audacity to say something that was racially oriented about this. I’m just telling people what I thought. Okay, agree with me or disagree, but it caused a firestorm. To this day, there are stories in the Philadelphia mainstream press about all this that still mention me as one of the great obstacles that McNabb had to overcome along with Terrell Owens and all that.

So here we’ve got this column in apparently a large… Well, a Philadelphia weekly — or I don’t know if it’s a weekly, but it’s a local paper that has a 20,000 circulation, and I’m told it’s a largely black audience, now accusing McNabb of playing the race card for being a “fraud on the field while hiding behind excuses dripping in make-believe racial stereotypes.” As Mr. Mondesire writes, “Normally this column talks very little about sports because the games that grown men play pale in comparison to the great issues of racism, politics, social calamities, health crisis’s, war and peace, etc. which gives us plenty of fertile territory to explore and pontificate about. However, this week I felt compelled to offer some personal thoughts about your horrific on-field performances this season because at their core there is a lie you have tried to use to hide the fact that in reality you actually are not that good. In essence Donny, you are mediocre at best. And trying to disguise that fact behind some concocted reasoning that African American quarterbacks who can scramble and who can run the ball are somehow lesser field generals than one who can summon up dead-on passes at a whim is more insulting off the field than on.
“Your athleticism and unpredictability to sometimes run with the ball earlier in your career not only confused defenses, it also thrilled Eagles fans. At last, said many of us, now we have a multifaceted offensive threat whose talents threaten to not just dominate the NFC East Division, but maybe the whole NFL for several years. We were elated. We were in awe. We celebrated the boss’s giving you that huge lifetime salary deal which meant we’d have you around until it was time for you to join the other retired stars in television’s broadcast booth. But then you played the race card and practically all of us fell for your hustle. You scammed us man and there’s no way any longer to refrain from ‘keepin’ it real.’ We could have remained silent too, if you had found another way to remain effective and a winner. But when your mediocre talent becomes so apparent it’s time to call it out,” and they go on to just ream this poor guy just to shreds and quote and cite examples of true racial-barrier-breakers in the NFL and in college who endured hardships and mistreatment and even death on the field in order to break down the barriers.
“Hey, Donny, soup guy, pull your head out of your-million-dollar Campbell’s soup bowl for a moment and ask which current quarterback in fact made a gesture like that for members of his squad. The name Tom Brady ring a bell? Isn’t he the guy who took home last year’s Super Bowl ring while you were standing in the soup line?” It goes on. The Philadelphia media, too — and I have to tell you this, this is a local paper. They’re all local papers, small 20,000 circulation papers. After the Cowboys game, a Monday night game in which McNabb threw the interception that guaranteed the Eagles loss and snatched a loss from the jaws of victory — and that’s when McNabb did the final damage to his sports hernia that ended his season and dictated the surgery — I made it a point to read the Philadelphia papers the next day, and these people had done a total 180. They were talking about his reputation is ruined, that that’s the last thing anybody is ever going to remember of McNabb: this interception that turned over a game and that futile attempt at making a tackle, and I sat here all this time, and I’m thinking, “This, perhaps, to my mind has been inexplicable.” Here is McNabb playing hurt, putting up with all this abuse from Terrell Owens from training camp on, he’s playing hurt, and he’s doing his best to keep the Eagles in contention while they’re having all of these problems. He’s giving his all. 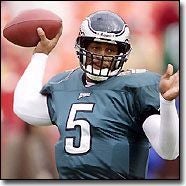 He’s trying as hard as he can even with this sports hernia injury that has limited his ability to run, scramble out of trouble, even limited his ability to throw, and yet he’s still out there playing, and these people are dumping on him, and they’re dumping on him as though he’s worthless and they’re dumping on him, talking about how his reputation is ruined, and I was stunned, because — well, actually I wasn’t stunned, because it makes the point that I have tried to make on this program for the longest time. The sports media takes these people up, takes these people, builds them up, makes them larger than life, then these young sports guys believe all this stuff, because everybody likes getting favorable press, and when you get it you want to keep doing what you’re doing to get it, and then after awhile, one little season like this, an injury-plagued season, a T.O. problem and it’s time to take McNabb off the pedestal and start dumping, everybody in Philadelphia is dumping on McNabb — and I actually think that this is one of those seasons where McNabb deserves all kinds of credit for courage and trying to make a go of it, despite the T.O. obstacle and all of that and despite the sports hernia. If I were McNabb, I would stop talking to them. I’d just wouldn’t. He’s gone out of his way to accommodate. He’s gone out of his way to be nice.

RUSH: But that’s — wait a second, because this Philadelphia paper talks about that. You know, Terrell Owens came out, Super Bowl, said, “Hey, I’m not the guy that got tired in the fourth quarter in the Super Bowl,” implicating McNabb. You got a couple other players on the Eagles saying McNabb was throwing up in the huddle in the fourth quarter because he was so nervous, hyperventilating, wasn’t in shape and so forth. I mean, that’s really where this started, after the Super Bowl last year. And, you know, Elway, the first three or four times in the Super Bowl loss, they got skunked. There was no chance for a fourth quarter comeback or making it a game. Broncos just got blown away. In this circumstance, you know, people just started dumping on McNabb left and right. To me the whole thing was impossible to follow because one minute McNabb was a savior, was the greatest guy on earth. The next day he was the whole reason this team was to rotten and to the core, didn’t have a chance and so forth. It’s been a roller coaster. My whole point all along was that the media had all these expectations, and some of it was based on race, and they looked past, they looked beyond, some apparent deficiencies and so forth, and still portrayed this guy to be the greatest thing since sliced bread, and now you’ve got all these people coming around saying he’s never been that good. I’m sitting here saying, “Told ya.”
END TRANSCRIPT