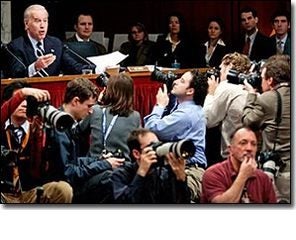 RUSH: I’m looking ahead today to the media’s “action line,” that which will move the story forward after the Alito hearings conclude, and they will go through the night tonight. They are scheduled to take a dinner break from six to seven and go somewhat into the evening tonight for your viewing pleasure at home. Now, sometime during that six to seven p.m. dinner break, the media will come up with the story line, the action line. “What is it that moves the story forward?” Well, the only thing that will move the story forward from their standpoint is: “Alito ran into trouble. A nomination is not secure. What are the possibilities this will crash and burn for the president?” That’s the action line. Anything that doesn’t advance that story line is not news. So you got two possibilities here: “Liberals tried every smear innuendo they could muster but Judge Alito parried them quite effectively,” or, “Judge Alito avoids satisfactory responses to penetrating liberal questions; liberals demand more specificity in coming days.” Which of those two do you expect will be the action line of the media tonight?
Well, you know it’s not going to be, “Liberals tried every way possible to trip Alito up, but he handled them masterfully.” It’s going to be something along the lines of, “Judge Alito avoids satisfactory responses.” You’ll have Biden out there, and you’ll have Leahy out there, if they’ve not been out there already. Kennedy out there saying, “Well, I was not really pleased with some of the answers. We need more clarification from Judge Alito. He side-stepped some of these important questions. That’s the reason we have hearings. We’ll get to the bottom of this. Give us time. We’ll have our witnesses coming up. We’ll get to the bottom of all this. I thought it was very interesting that Judge Alito thought it necessary to skirt around some of these very important questions he was asked today. We didn’t hear what we wanted to hear and so we’re enthused about our possibilities.” It will be something like that. That’s what the senators will say. So to just cut to the chase, let me give you the story line: Strip Search Sam Beats the Rap; Kennedy Tries But Can’t Bring Out the Truth.
BREAK TRANSCRIPT
RUSH: Mr. Snerdley has a friend at the Alito hearings today in one of the pro-Alito groups that’s there, and Snerdley just talked to her on the phone. She said the media is grumbling during the breaks because there’s no story — proving my point. There is a story. Alito is running rings around the Democrats, but that’s not the action line. That’s not what moves the story forward. What moves the story forward is: “Alito screwing up, admitting that he is going to overturn Roe vs. Wade and he believes in strip searching little ten-year-olds and he’s a racist, sexist, bigot, homophobe and the Democrats have proven it.” That’s the story line, but they don’t have it because it hasn’t happened, so to them there’s no story.
END TRANSCRIPT