Questions for the Democrats

RUSH: Even before I had begun the first-hour monolog today, the phones were full with people who wanted to discuss nothing but the port deal, and I’m sure some of you are wanting to call because there are just now things that you’ve learned. I guarantee you, whatever it is you’ve just learned we discussed it last week. That is why you need to spend every waking moment listening to this show so you’ll be on the cutting edge of societal evolution. The focus today, though, is on the politics of this and the disingenuousness of the Democrats in their opposition to this. I have a question for all of you liberals who have suddenly found religion on national security. 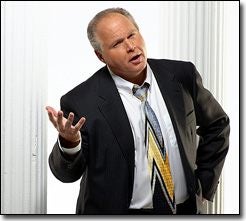 For the last four years you haven’t cared a whit about it, didn’t matter one iota. In fact, the biggest threat was George W. Bush. Bush was spying, Bush was torturing, Bush was just killing people for oil and Cheney and Halliburton. The big threat was Bush. Bush was Hitler. Now all of a sudden you’ve discovered an enemy. All right, fine. You have discovered an enemy, the United Arab Emirates, and you’ve discovered a threat, the ports. You’ve discovered a vulnerability. We are vulnerable to port infiltration, and especially since an Arab company, the United Arab Emirates, is going to own or operate, manage some of these terminals at these ports. So a series of questions for you. Should we use the authorities and the powers of the Patriot Act to monitor our ports?
If you liberals are worried about infiltration, if you’re worried about terrorists sneaking into this country under the cloak of secrecy, under cover of darkness with the willing participation of the United Arab Emirates, should we use the authorities granted under law under the Patriot Act to monitor these ports? Should we use our National Security Agency intercept program to monitor possible infiltration by Al-Qaeda of our ports after the UAE takes control of these nine terminals? Should we? If we’ve got a security problem, we’ve got a security problem. Another question. Should we aggressively interrogate Al-Qaeda detainees to determine whether there might be future attacks on our ports? Should we talk to the detainees that we have now in Club Gitmo or some of these other secret prisons, Abu Ghraib. Do they know anything about a potential threat posed to our ports because the United Arab Emirates is going to own nine terminals there? Until you liberals can say “yes” to all three of those questions, you are the appeasers that we have always said that you are.

The point is, you liberals don’t support securing the ports, even when they are operated by an American company. What’s the difference? Why couldn’t we do the Patriot Act, using those provisions, why couldn’t we use the NSA foreign intelligence eavesdropping program, what does it matter who owns the ports? If the ports are vulnerable, if anybody can infiltrate anywhere, why have you opposed the very programs the administration’s put into place to protect these facilities, hmm? Can any liberal call and give me the answer to this? In fact you can’t because I have a friend who is secretly on the People for the Liberal Way mailing list. And get this. Here’s their latest dispatch from People for the American Way. Is the government spying on you? Find out. You want to know if the government is spying on you, use the Freedom of Information Act to do so. Under the Freedom of Information Act, anyone has the right to request information from the government. So People for the American Way is still in the process of trying to cast the NSA spy program as domestic spying, Bush is spying on Americans, Bush is really not trying to catch terrorists, he’s spying on you and People for the American Way wants you to find out.

All right, if you’re going to stand by this threat, if you’re going to base your opposition to the deal on that premise, then will you join the rest of your citizens in taking steps to find out who they are and what their plans are before they can execute them? ‘Well, no, Rush, we’re not going to do that. Our step, a very simple step, we’re just going to make sure an Arab country doesn’t own any of these terminals.’ Oh, that alone, that will stop the terrorists from getting in, huh? Is that the position you libs are going to put yourself in on this? Just keep the Emirates from owning these nine terminals, and we don’t have to worry about anything else. No terrorist will get into the terminals unless the United Arab Emirates owns them. So if we could just prevent the United Arab Emirates from owning these nine terminals, we don’t have a terrorist threat to worry about other than George W. Bush.

You see the position they’ve gotten themselves in here, folks? The very mechanisms that we have come up with as a society, as a country to try to prevent future 9/11s from happening, the Democrats oppose. They’re trying to destroy every program that we house detainees and interrogate them by calling it torture. They’re trying to destroy the ability to monitor phone calls from foreign countries to this country or from this country to foreign countries involving terror suspects talking to somebody in this country, trying to miscast that as domestic spying so as to kill the program, or to kill Bush. They’re trying to make sure that we cannot operate prisons. They’re calling them torture chambers. They don’t want any aspect of the intelligence gathering operations in place, the Patriot Act, to be used. They’re trying to kill that. And they applauded with glee when they did. And yet all of a sudden they have found a dire threat to our ports simply because of ownership by the United Arab Emirates. I would think that this threat exists at any port regardless who the operator of the terminals is, and as such we better implement some of these programs.

If these ports are so vulnerable, I don’t know yet of a terrorist act at a port. I don’t know yet of a terrorist act facilitated by activity through a port. Not saying it won’t happen, but the Democrats’ position on this would make far more sense if they were acting as airlines and airports. If we’re not going to ban Arab-owned airlines from flying into the country, well, hell’s bells, what’s the difference, what’s going on? Well, the difference is, Rush, we inspect every passenger. We know who’s on every airplane. We don’t know what’s in the cargo holds, we don’t know what’s on the manifests of these ships coming into the UAE — well, true, but even as such, I don’t yet know of one terrorist act facilitated through any of our ports. But now the Democrats have found this dire threat. Yes, my friends, we are vulnerable, we are exposed, we are practically standing naked before the world begging them to hit us, and yet the Democrats still, I’ll wager you, will oppose every technique and every authorization under the Patriot Act, NSA, you name it, to find out in advance when this is going to happen. Their position is that the ports can be made safe simply by keeping a certain owner out of nine terminals.