RUSH: All right, I want to go to the audio sound bites. Two things. We’ve got more from this long-haired, maggot-infested FM type teacher, Jay Bennish, out in Aurora, Colorado. We have four more bites. I’m going to try to limit my commentary because they speak for themselves. Here’s the first of the four.

BENNISH: Now, if we have the right to fly into Bolivia and Peru and drop chemical weapons on top of farmers’ fields because we’re afraid they might be growing cocoa and that could be turned into cocaine and sold to us, well, then don’t the Peruvians and the Iranians and the Chinese have the right to invade America and drop chemical weapons over North Carolina to destroy the tobacco plants that are killing millions and millions of people in their countries every year and causing them billions of dollars in health care costs?
RUSH: This is a guy teaching geography, human geography in Aurora, Colorado. Here’s the next bite.
BENNISH: Where in this definition does it say anything about capitalism is an economic system that will provide everybody in the world with the basic needs that they need? Is that part of the system? Do you see how this economic system is at odds with humanity, at odds with caring and compassion, it’s at odds with human rights?
RUSH: What have I told you? These people don’t like capitalism because they think it chooses winners and chooses losers, and they think the winners choose themselves, purposely leave the losers out, everything is unfair and unjust, and the more I hear of this guy… I mean, we’ve had callers. We’ve had liberal callers that are smarter than this guy, but he’s just a clich?. He’s so stereotypical. Here’s the next one.

BENNISH: Now, do we really want to kill innocent people? I don’t know. I don’t know the answer to that. I know that there are some Americans who do, people who work in the CIA, people who have to think like that, those kind of dirty minds, dirty tricks, that’s how the intelligence world works. Sometimes you do want to kill people just for the sake of killing them. 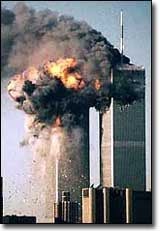 RUSH: This guy is justifying the attacks of 9/11 now because the White House and Congress are military targets. CIA has an office there, means it’s a military target. I tell you, focusing on this guy’s comment that Bush equals Hitler is to miss the point of who this guy is and what he’s teaching. We’ve got one more, and here it is.
BENNISH: To many Americans, that flag is no different than the Nazi flag or the Confederate flag it. It represents people that came and stole their land, lied, brought disease, rape, pillage, destruction, et cetera.
RUSH: This guy, has he become an adult yet? Do you hear his voice? This guy sounds like he’s a paper boy still doing his route. My gosh, folks. This is just… totally believable. American flag no different than the Nazi flag, Congress is a military target, White House is a military target, World Trade Center was a military target. CIA has an office there! All of this is our fault. We deserve this. We deserve all of this because of what we have been doing around the world. That’s what this guy’s thrust is.
END TRANSCRIPT