RUSH: Peter King, congressman from Long Island who has personally savaged and attacked me and accused me of being single-handedly responsible for lessening the opposition to the port deal, was on John Gambling’s show, WABC this morning, the program that precedes this one in New York. He said that we gotta get an American company in there, and they gotta have the up-front, heads-up responsibility, the Dubai people can be part of it. He suggested that Bill Clinton actually broker the deal. He says, ‘I understand that Bill Clinton has a very good relationship with people in Dubai. Maybe he could help out here.’ 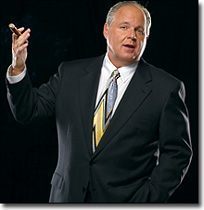 Let me make a suggestion. It has been said that Halliburton might be a willing partner with the Dubai port people, but you know what would happen if Halliburton actually partnered up with them. The Democrats and liberals would be changing their tune and talking about how this was a conspiracy from day one to get Halliburton involved. So I have a compromise suggested, and that’s Wal-Mart. Wal-Mart, I mean, they’re huge. I saw a fact sheet on just how big Wal-Mart is in terms of the revenue they generate, the amount of income they produce, salaries that they pay, it’s amazing how huge. It’s bigger than you even think it is. Clearly they’re large enough to handle ports and partner up to Dubai. And you know, they’re excellent distribution. They can work well with the longshoreman’s union — ha-ha-ha-ha-ha. Can you imagine if it was Wal-Mart? Can you imagine, I mean, the whole problem with the left and Wal-Mart is that they’re not union. Imagine putting Wal-Mart in this deal. It’ll never happen, I know, it’s just one of these things that I’m excited about.